Golden Oddity: Don Harris has a 1-of-32 1972 Mustang convertible. What makes it rather rare? 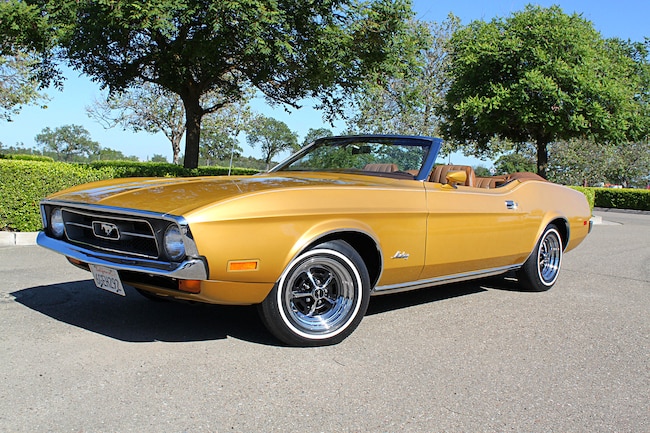 When roaming the show fields, rare models like Boss 429s, California Specials, Shelbys, and the like draw instant crowds. They were seldom seen new, and today, are seen even less. Rare is often linked with desirable and valuable, but that is not always true. Many times, rare means that no one, or only a few, wanted these cars when they were new. Bench-seat cars and Grabber Blue Mach 1s with red interiors are just a couple examples. Today, these types of rare Mustangs are considered oddities and can make a great conversation piece at a show.

One of these oddities would be Don Harris’ 1972 Mustang convertible. At first glance, nothing makes it stand out as odd or rare, but only 6,401 ragtops were built that year. That’s way down from the 73,112 manufactured during 1965. Don’s car has a 351-2V H-code under the hood, which was the second-most-popular engine for a convertible that year. That’s nice but not unusual. The Gold Glow color is also unique, as only 377 convertibles were shot in the color.

No, what really makes you scratch your head is when you peer inside. This car has the Deluxe Interior that all convertibles were fitted with in 1972, and the Ginger color is seen sporadically. What catches your eye is the manual shifter. Most convertibles came with an automatic transmission, so the driver could just cruise with the top down with no worries. But this one isn’t a four-speed transmission. It is actually equipped with the standard, but normally optioned out, three-speed. According to Kevin Marti’s book Mustang … by the Numbers, 82 convertibles were equipped with the 351-2V and three-speed manual combo.

So why did the original owner, Don Campbell, equip his ragtop with the base transmission? Was it to save money? Probably not, because he then proceeded to check off the option sheet with items like the Convenience Group, three-spoke Rim-Blow steering wheel, power steering, power front disc brakes, dual color-keyed racing mirrors, competition suspension, and an AM radio. The Seattle, Washington, resident even added intermittent windshield wipers to contend with the Northwest’s soggy weather. Also, the Instrumentation Group was added, though that option is normally associated with the high-performance Mach 1. The last puzzling feature was the addition of power windows, which back then, was a feature normally seen only on luxury vehicles, not on a car that was motivated by a base manual transmission.

Second owner, Don has never spoken to the original owner, (who he believes is deceased), so these questions will never be answered. Don purchased the car from a collector-car dealership called Park Place in Seattle back in 2008. He had located the car on the internet from his home in Merced, California. Don had always been a Chevy guy up until this point, owning classics like a fully restored 1957 convertible and a show-stopping 1966 Impala SS convertible. That Impala is what led him to search for a new vehicle. “I was offered a wild price at a swap meet for it,” Don says. So he let it go, and decided to look for a smaller car that looked good.

Originally, Don had been searching for a 1970 Mustang convertible, but he crossed paths with the gold 1972. “I actually knew very little about Mustangs at the time,” Don says. “I wasn’t aware of the big change between a 1970 and a 1971-1973.” Nonetheless, he decided to make the trip to Seattle to check out the Ford. The dealer had already told him that the car was mostly original and pampered for its entire life. When Don arrived, he found the original paint, except for minor touchup on the right quarter, to be in exceptional condition. The interior, too, was well maintained, while the engine compartment had at one time been detailed a bit when a new water pump was installed. The dealer also was able to show Don all the original paperwork, which Don Campbell had saved, along with detailed records like gas receipts. Don said the owner even made a graph documenting the miles he drove each year. So from 1972 to 1982, the convertible had reached the 100,000-mile mark relatively quickly, but it was only driven 6,000 miles until Don’s purchase in 2008. According to the original sales contract from the William O. McKay Ford dealership, Don Campbell had paid $3,796, plus tax and license, for the convertible and received $700 for his 1966 Mustang hardtop trade in.

Don Harris went ahead and struck a deal with Park Place. “The price was right, and it looked nice,” he says. He made arrangements to have the car shipped to his home. At that point, he was totally unaware the way the car was equipped made it an oddity. He just knew it would be fun to stir the gears, even if it only had three of them.

Don drives it quite often since the weather in the Central Valley of California is nice. He also takes it to shows and cruise-ins whenever he gets the chance. He did make one change to it early on, adding the 14x7 Magnum 500s to give it a sportier look than the full wheel covers offered.

So let this be lesson to all of you. Ford built nearly three million first-generation Mustangs. Although the rare Bosses, Shelbys, and GT/CSs may be fun to admire (and should be), a little digging around the show field, or even on the street, can reveal an oddity like Don’s ragtop that can stir up some excitement, as well. 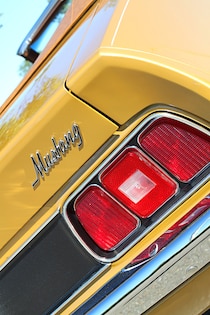