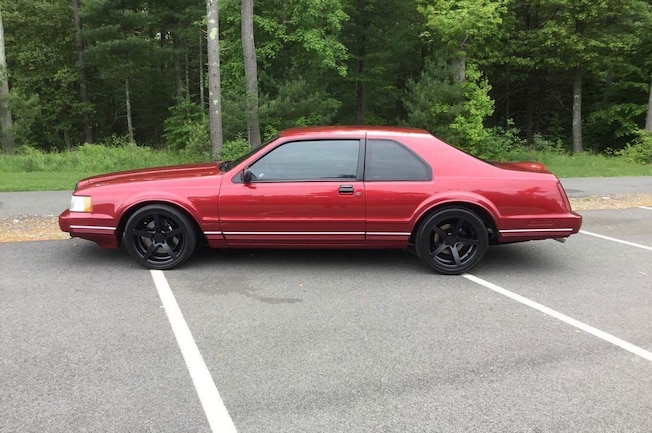 Within the Mustang community, Coyote swaps run rampant. It’s been six years since the Coyote engine made its debut in the 2011 Mustang GT and F150, but the engine shows no sign of going away anytime soon. And that’s a good thing for Mustang enthusiasts who continue to drop the engines into just about every car they own.

For Kevin Schnyer, he dropped a 2014 F150 variant into his 1990 Lincoln Mark VII LSC using an AJE Fox K-member, American Racing Headers long-tubes, a Power by the Hour accessory kit, and a Holley Sniper intake. Kevin was able to get the A/C fully-operational by using the lines, condenser, and compressor from a 2004 Cobra. He even had to add a Mustang heater box and make a harness for all the A/C and heat controls in order for everything to work.

Before dropping the Coyote into place, the engine compartment was smoothed and treated to new paint. The 2014 F150 Coyote engine is cooled via a Ron Davis radiator, while a hydroboost system provides power steering and brakes.
It’s pretty rare to see a manual transmission in a Lincoln, especially when it’s attached to a Coyote engine. Kevin used a TR3650 transmission behind the Coyote, while Maximum Motorsports adjustable rear control arms help search for traction when the loud pedal is pushed with aggression.

Whereas Coyote-swap Mustangs are getting to be common, Kevin’s Lincoln Mark VII LSC certainly stands out.