Greased lightning: Built to haul in more ways than one 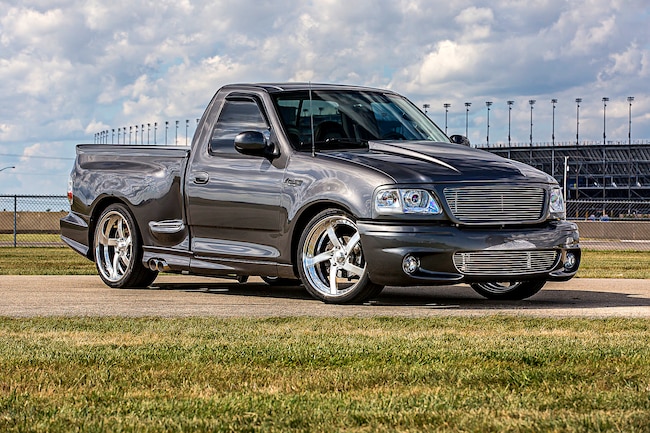 Long distance relationships are sometimes unavoidable…but they always suck. As we know, such estrangement happens all the time between car owners and car builders. Bad enough you’re in New Jersey and your car is in San Francisco. Or how about you’re Nathan Findlay working as an “executive sports manager” in Qatar and your roller is in Pennsylvania…or maybe Illinois? Might as well be on the moon, so having boots on the ground is critical.

From Pennsylvania, the Lightning was shuffled off to FH Customs in Illinois for the body tweaks. Since the Dark Shadow Grey paint was still in 9/10ths condition, it required nothing. FH detailed the exterior with a modicum of understated pieces: Cervini’s provided the smooth side steps, the rolled pan and the 3-inch cowl hood. FH inserted polished billet upper and lower grille inserts, smoothed the lower tailgate molding, shaved the lock and then finished off the modifications with a small lip on the back of the tonneau cover.

Johnny’s responsibility was the high-torque motor. He pulled the long-block and gave the bores a 0.020-inch clean-up that increased displacement to 333ci. Since the motor was all the way down, Johnny spec’d-out a new rotating assembly made up of a Cobra Jet crankshaft, Manley H-beam connecting rods and JLP/Manley 9.4:1 pistons. In real life, the stock engine produced more torque than horsepower (380/450, hp/lb-ft) at the flywheel. Johnny’s ministrations have simply amplified that imperative in the new motor. At the time of writing, the engine still had not been broken-in but Nate claims that at 17.4 psi it produced 575 lb-ft to the wheels; there was no power rating available. With that parameter in mind, plus a projected positive manifold pressure of 22 psi, Johnny’s alluding to 710 hp and 790 lb-ft torque.

JLP went after the suspension, tailoring it more for appearance than practicality. The control arms in front and rear are stock; the coil springs and leaf springs have a 3- and 5-inch drop, respectively, and operate with QA1 adjustable dampers. To null any traction issues, JLP retained the original anti-sway bars and installed its long traction bars. With the correct offset and backspace, Johnny was able to include 22-inch diameter Boze Acute rims (8.5, 10.5-inch widths) shod with 255/35 and 305/30 Pirelli P Nero Zero GT rubber.

JLP buttoned the lower end up with a Moroso oil pump. He swapped in a JLP Stage II hydraulic roller camshaft (specs proprietary) but maintained the original rockers. For this application, Johnny broke out a set of his JLP R cylinder heads that are CNC-ported and fitted with JLP-spec Manley stainless steel valves. Though the original plant had an Eaton Gen-IV puffing (at 8 psi) between its banks, Johnny swapped it for a Kenne-Bell 2.6 supercharger pushing air through a Jokerz Performance polished and ported lower manifold and mid-plate. The charge travels through a JLP Thunder Tube, thence to a single-blade throttle body and an SCT BA-2600 mass air meter. Temp of the supercharged air is reduced via an LFP intercooler that works in conjunction with an AFCO dual pass heat exchanger equipped with dual fans. Fuel delivery and dispersion is based on a Magnafuel pump and Deatschwerks 78 lb/hr injectors and pressure regulator. Waste is voided through Bassani/JLP long-tube headers, an X-pipe and a pair of 3-inch Bassani mufflers.

After torque channels through the 4R100, it rolls down an oversize aluminum driveshaft to the original 9.75-inch axle, a Truetrac differential and 3.73:1 gears. Nate’s transmission is fixed with a Precision Industries 2,600-rpm stall torque converter, a Summit auxiliary fluid cooler and a JLP shift kit. The shifter is a modified unit out of a 2007 Harley-Davidson Edition F-150. Nate is especially proud of the conversion, a story in itself, completed by Joel Buchanan, who put 60 hours in the creation of a fiberglass surround for the shifter that melds perfectly with the custom console that was sourced and refinished by Lightning-lover Chris Conrad.

Before they touched a single component, the cats at FH gutted the cab. In anticipation of a sound system composed of JL Audio head, 5-channel amplifier and 10-inch subwoofers in a hand-built rack, they treated it roof-to-floor with Dynamat sound deadener. Since the Lightning will probably not be coming back to the states again, the speedometer was converted from miles-per-hour to kilometers. A three-gauge cluster on the A-pillar set with a carbon overlay by Black Cat Customs holds Auto Meter Pro Comp Ultra Lite Carbon Fiber series dials. Bet you noticed the chrome door pulls from a 2003 Harley Davidson edition, too.

So Nate, before you leave Qatar for Australia or Jakarta or wherever, be sure to show the locals the benefits of American engineering. 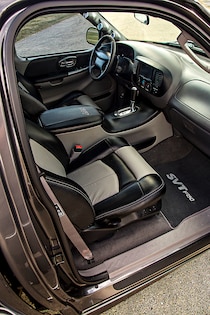 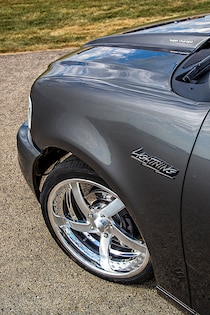 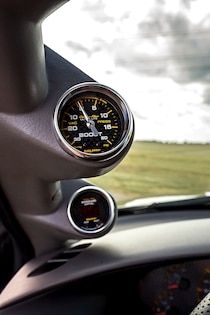 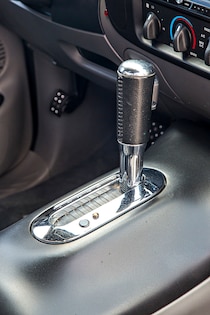