A Mustang and A Half 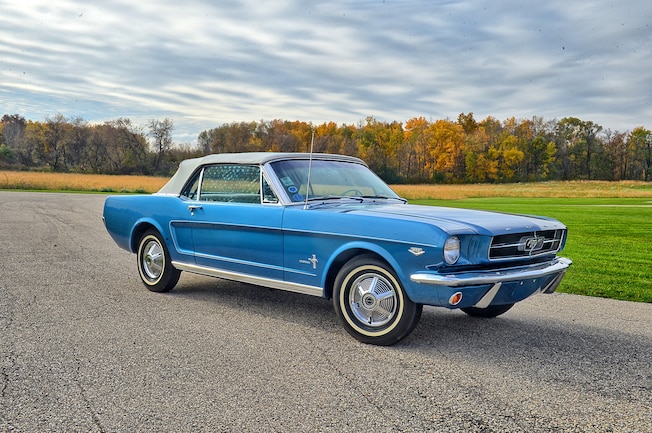 It is hard to believe that the original Mustang, so popular and built in such big numbers, would have such low production in the most collectible engine and body style combination. But that’s what we see here in Jose Luis Abraham’s MCA Concours Gold 1964½ classic. This first year Mustang is so rare and hot it’s a Mustang and a half.

It’s a convertible. It’s a K-code. It’s a four-speed. And, perhaps even more unusual, is the numeral “9” beneath “AXLE” on the original door data plate. This digit decodes a set of stump-pulling 4.11:1 gears in a “single track” (as opposed to an Equa-Lock) 9-inch rear end.

No doubt, Jose Luis could burn rubber from one end of Santa Domingo to the other—he lives in the Dominican Republic and is one of the up and coming Mustang collectors in the hobby today. He recently added this restored 1964½ Hi-Po to his collection of more than 100 cars that include 40 to 50 classic Mustangs. Jose Luis said in a light-hearted tone, “To be honest, I don’t want to count. I feel if I count too much, I will say I can’t buy anything else.”

Abraham sent the ’64½ to Bob Perkins’ shop to add “trick Hi-Po pieces” that apparently had been cobbed from the car as it passed from one owner to the next since winning MCA Gold. These trick pieces included an air filter element, spark plug wires, fuel pump, radiator cap, belts and hoses.

Abraham ran across this car in 2014 when he was at the Mustang 50th anniversary in Charlotte, North Carolina. The car was for sale on eBay, but Jose Luis had the good fortune to be able to talk to former owner Nate Miller, the person who restored the car in the mid-1990s. Miller today owns Buckeye Automotive Restorations in Columbus, Ohio but he found this Guardsman Blue Mustang in North Carolina in 1991, when he was 16 years old.

“I worked at a place called Al’s Mustang Stable in Niles, Ohio from the time I was 15 until I was 22. I was in Charlotte at an automotive swap meet with my dad and Al. A guy told us about a convertible he owned.”

The asking price was very attractive at $700. So, the three of them followed the man to his farm to get a look at a Mustang convertible. When Nate spotted a K code in the fifth digit of the VIN, he remembers, “We all looked for the big balancer on the motor real quick.”

Luckily, the original 289 Hi-Po was under the hood and it was all there with matching numbers to boot—same for the rest of the drivetrain. Miller remembers keeping the K-code quiet until they made a deal.

How rare is the Hi-Po convertible of 1964½? The figure has to be very low. Ford didn’t start installing the K-code 289 Hi-Po in the Mustang until June of 1964. Of course, 1965 model year production kicked up in the middle of August. So that’s 50-60 days of production time at the most. Ford’s high performance 289 hit the Mustang lineup in June of 1964 when all Mustangs were wired for a generator. The alternator arrived with the official start of the 1965 model year. When Miller rebuilt the 289 Hi-Po, he installed an N.O.S. Hi-Po camshaft. This car also has the correct aluminum water pump specific to the generator cars of 1964½. The alternator-equipped 289s came with a cast iron water pump.

“The farmer had parked his old ride in a field. He had owned this Mustang since 1972. The 289 was frozen, the interior was dry-rotted, the top was ripped off, the hood was half-open, the hub caps were missing, and the wheels were “buried to the axle in mud,” in Jose’s words. The body had some rust but that was fixable. What really made this car attractive was being so complete. Finding 289 High Performance parts is not an easy job, especially with a ’64½ model that came new with a generator.

After a ground-up restoration, Miller remembered winning MCA Gold in the Concours class when he was 18 years old. He is 41 today.

The 289 Hi-Po was all there. Miller recalls, “We punched that .030 over as I recall. The generator itself is very difficult to find with that big pulley on there. The wiring is all different. The snubber plate is different on the rear end. It had the transverse exhausts—the headers come down to an H-pipe and then go through resonators to a transverse muffler in front of the gas tank and then to the turn-downs.”

White interior was not very popular when these cars were new. However, white is very popular today with collectors. The interior is trim code 42 for “white vinyl with blue trim.”

This restoration pretty much turned Miller into a Hi-Po expert, with an emphasis on 1964½. In fact, he still owns one of these rare cars today. Miller also mentioned this 1964½ has the 5-bolt block that is the same block Ford used with Shelby’s 289 Cobra and their Hi-Po 289 Fairlane; the 1965 Hi-Po’s used the later 6-bolt block.

Content the car was authentic Jose Luis went through with the purchase. The car is an older restoration but well preserved, and is a car he can be proud of in his collection and one he can also drive on weekends.

One of the few extras on this car is a power top. A Hi-Po added $372.92 to the price when a convertible had a base price of just over $2,500. Hi-Po is short for High Performance, Ford’s term for their high-winding, solid lifter 289 made famous in Carroll Shelby’s Cobra Roadster.