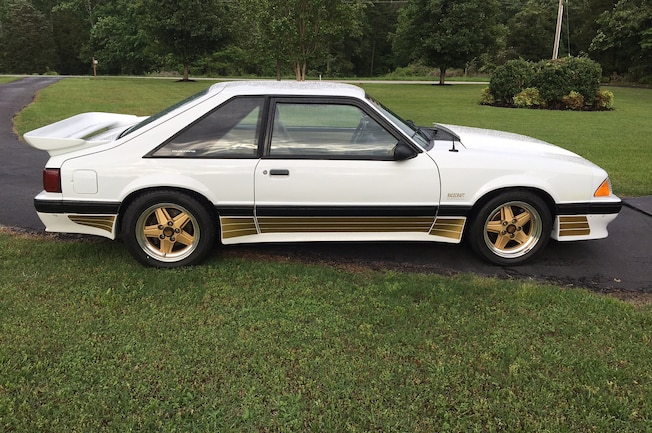 When trying to find a significant other we look for the most attractive combined with least amount of “crazy,” and that goes for both sides of the fence, but all the while we just want to have things in common. Sometimes those commonalities are there right off the bat, and yet other times they’re developed after the relationship hits its stride.

For Travis Smith, he had a couple wicked Saleen Mustangs already, and his significant other Mallory Waldrop had the opportunity to drive his Fox Saleen (89-374) to the Ponies in the Smokies show back in late March, 2017. You know what happens when you drive a Saleen, right? Yeah, you want one, and that’s exactly what happened to Mallory, as well. She wanted one for her own.

Travis says the Saleen does have a few bolt-ons, but it is largely stock. Those will most likely change after Travis and Mallory start digging into the car. If Travis’ Saleen is any indication as to this car’s direction, it will be a wicked piece once finished.

The couple looked high and low, but in the end, they didn’t have to go far to find the one. Travis found this Saleen, which is chassis 89-590, in North Carolina, and being from Spartanburg, South Carolina, it was a short trip to retrieve Mallory’s Saleen. “The car spent its early life in the San Diego area, and then it went to Florida before ending up in North Carolina,” Travis says.

Travis says the car is 1 of 5 with the white exterior/tan interior combination, according to the letter of authenticity from Saleen. The Saleen has just 77,000 miles on it and the suspension appears all stock, but it does have the usual bolt-ons. “I’m going to slowly rebuild it with new paint, a fresh drivetrain, and refresh the interior,” Travis says. After the rebuild, Travis and Mallory have a simple plan, and that is to “Drive it.”

Any Fox Mustang with a tan interior would be considered unique, but throw the Saleen name into the mix, and the rarity is turned up a notch. Travis says 89-590 is 1 of 5 white Saleens featuring a tan interior.