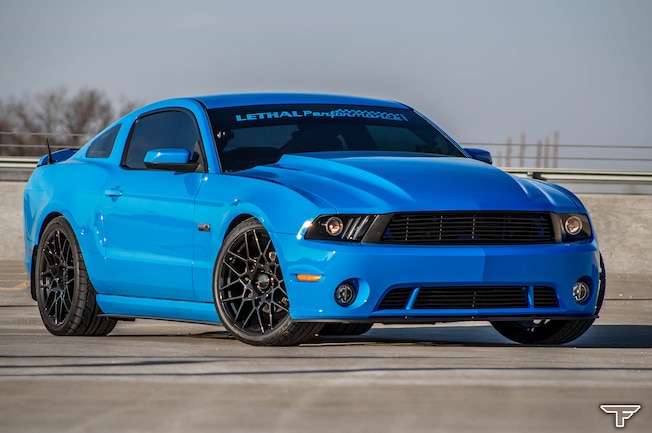 This Grabber Blue 2010 Mustang GT is owned by Kris Ledford from Greensburg, Indiana. Over four years of ownership, he has outfitted his three-valve S197 with a full BMR suspension, Cobra Jet springs, Viking shocks, and Roush racing struts. Shifting power has been upgraded with a 3650, a Ram single-disc clutch, and an MGW Industries short throw shifter. The rear features an Eaton differential and beefy 4.10 gearing. Extra oomph and rumble are provided by Pacesetter 1 7/8-inch primary long tube headers, FRPP Hot Rod camshafts, a JLT cold air intake, and a Ford Racing intake manifold. Ledfod gave the car a full makeover, with Roush and Cobra Jet parts making up the front half and converting the back half to 2014 GT parts. The exterior is complemented by staggered GT500 wheels (20x9, 20x10) wrapped with Nitto 555 G2 rubber (255/335/20 front, 315/35/20 rear).