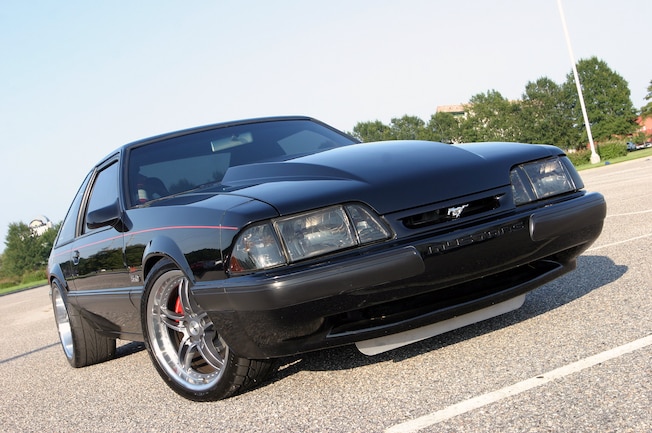 Remember the first time you drove a Fox Mustang? If you hadn’t owned a fast car before you drove one, you probably thought the Fox was the fastest thing on the planet. The good ol’ 5.0L pushrod had an abundance of torque on the lower side of the tach, which made it feel fast. Of course, we never left them alone, so we became more and more jaded as mods came on board. However, once you step into a modern Mustang and feel its performance, stepping back into a relatively stock Fox pushrod combination leaves you wanting. You wonder if something is wrong with the car. Don’t misunderstand—we love Fox Mustangs, and pushrod engines, but a proper Terminator or Coyote powerplant is tough to beat in any Mustang these days.

That’s exactly the spot in which North Ridgeville, Ohio’s Gus Markou found himself. Let’s back up a second, though. First, Markou has had the car since the ripe old age of 15. How he was lucky enough to own a Fox Mustang at that age came about from his dad ordering the car for Markou’s older brother Nick. However, Nick went into the USAF, and the car sat in the garage. When Nick was out of the service, he moved to Greece, and left the car behind.

Next up on the driving list was Markou, so the car was passed on to him. As with most dads, Markou’s dad knew what he was doing. The car was ordered minus the creature comforts of the day, like power windows, mirrors, and locks. “Just an FM radio and roll down windows for my brother,” says Markou. Maybe his dad wanted to keep the gadgets to a minimum—less stuff to go wrong, perhaps.

Markou’s friend Matt Gross spent a lot of time on the car’s interior, converting it from red to black and covering the dash, center console, and kick panels in leather. The door panels were modified to accept the manual window cranks, and a pair of Corbeau seats was upholstered to match. The interior also sports dual Aeroforce gauges. The speakers are all JL Audio with a 12-inch sub and amp. The gauge cluster and pedals were the only components making the transition from the Cobra to the Fox.

His wisdom probably saved Markou from changing out faulty door lock solenoids, power window motors, and more, but that was also the way to order the quickest Mustang. With less weight from actuators and motors, Fox Mustangs devoid of the power options were amongst the quickest out of the box. Whatever line of thinking Markou’s dad subscribed to, we aren’t sure how wise it was to turn a 15-year-old loose with the quickest Fox Mustang available. But that’s what happened.

Besides his dad and brother, Markou wasn’t the only Fox fan in the family. His other older brother, Alex, also had a 1989 LX 5.0L at the time. With both brothers having Fox Mustangs, a passion was born. Markou says, “As I grew up with the car it got different combos from the usual bolt-ons to a built 306 with nitrous.”

However, as life happened, he wasn’t using the car very often, much less taking it to the track. To have a more comfortable street car, Markou added a 2003 10th Anniversary Cobra convertible to the stable in 2004. “That’s when I met the love of a DOHC supercharged 4.6L,” he says. “As I still had the ’87 sitting in mostly street/strip trim, I figured why not take the best of both worlds and collide them?”

Markou purchased a wrecked, low-mile Cobra out of California and had it shipped to his home in Ohio. “With the help of my friend Brandon Phifer we worked endless nights to achieve what we ended up as Project Terminated.”

Dan “The Man” Watts gets credit for Project Terminated’s wire tuck, while Jimmy at North Coast Powder Coating worked his magic on basically everything under the hood, the exhaust, brake calipers and brackets, and many suspension components, including the rearend housing. The Terminator swap is good for 650 rwhp and 630 rear-wheel torque thanks to a Rick Trunkett (Big 3 Racing) tune.

The boys went to work transferring everything over from the Cobra to the Fox. But in order to get the engine into the Fox, they first had to add an Anthony Jones Engineering tubular K-member and front control arms with Steeda X2 ball joints and Maximum Motorsports caster/camber plates. Strange Engineering 10-way adjustable coilover struts with Eibach springs round out the front suspension.

The most important part of the swap, the engine itself, is all stock. However, everything around it has been modified for increased performance and horsepower. Markou added a Whipple 2.9L supercharger, an SCT BA3000 mass air meter, an Accufab throttle-body, and a JLT Performance cold air intake. Dan “The Man” Watts did the fuel system, which consists of a pair of Aeromotive Stealth 340 fuel pumps, a Fore Innovations regulator and fuel rails, and 80-lb/hr fuel injectors. Boost is at 20 pounds, while the supercharger is cooled via a stock intercooler teamed with a Lightning Force Performance heat exchanger. The combination is good for 650 rwhp and 630 rear-wheel torque.

To build a car of this magnitude takes a lot of help from friends and neighbors, but also a lot of patience from the significant other and family. Besides those mentioned in this article, Markou owes a lot of patience and understanding to his wife Melissa and children Evan and Ava.

Behind the supercharged engine is the same 2003 Cobra transmission out of the donor car, but it was upgraded with a 26-spline input shaft, a Spec Stage 3 clutch, and a Pro-5.0 shifter. Behind the T-56 is the donor Cobra’s driveshaft along with a Lakewood driveshaft safety loop. A solid-axle 8.8 lives out back with 3.73 gears, Strange Engineering 31-spline axles, and a Ford Performance differential. Markou upgraded the rear control arms to Team Z Motorsports items with Strange Engineering 10-way adjustable coilover springs. Tying everything together is a Competition Engineering eight-point rollcage and Maximum Motorsports subframe connectors.

All this work has translated to a best quarter-mile time of 10.80 at 135 mph, traction limited, obviously. However, with a proper suspension now under the car, Markou plans to add slicks to the car this summer and see what the car can really do. He tried slicks at the end of 2016, only to rip the upper torque boxes, which sent him all over the track. With the LMR-sourced big ’n’ littles, and revamped suspension, Markou hopes that translates into low-10s.

Nothing wrong with that. 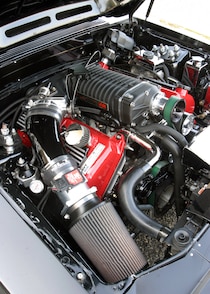