Matt Alcala's 1965 Mustang is Beyond Just a Track Car

Matt Alcala started out to build a basic driver/track rat, but got sidetracked somewhere along the way 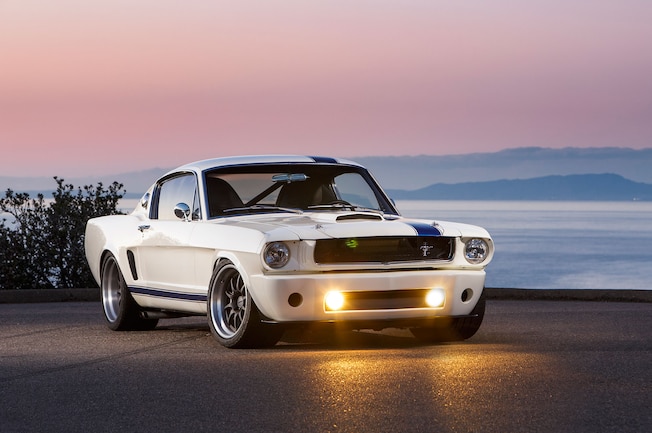 We’ve never met San Diego, California resident Matt Acala in person. But somehow we feel like we know him in a way that we don’t always get to know many people. Maybe it’s because of what he said in the tech sheet he sent us that outlines the build of his 1965 fastback; a car that started out as many old Mustangs do these days, but ended up like only a few really do. His eloquence in describing the process and the path of the build struck a chord with us in a way that we both understand and appreciate in a number of ways. A dose or two of dry humor along with its enlightening honesty was also refreshing to be sure. We’ll give him the floor here:

“As a car person, I believe we always think we know what we’re getting into when purchasing a project—often a dilapidated pile of crap sheet metal that once resembled a car many years ago. We’ve built cars in the past, we know what it takes, and we set realistic goals for our next project, but projects never really play out that way. Unlike normal people, our ‘car people’ brains are like databases that index all the automotive information we come across, and store it away in some dark corner of our minds, waiting to be set free to destroy any practical plan or budget for our project. When I bought this car I was wrapping up college and wanted a simple driver/track car; something that would bolt together. I figured I’d be going to grad school studying something practical, like business or law, which was the responsible but unappealing thing for me to do since I was far more interested in cars and art. If I didn’t do that, I figured I’d work for the family construction business.

Custom body work includes almost everything except for the roof and the trunk. This includes a hand-fabricated front valance; a custom hood scoop to fit the Cobra Jet manifold; custom engine-bay bracing and under hood close-out panels; custom widened fenders, doors and quarter panels; and custom quarter-window louvers with integrated fuel fillers. One result of the four-year build completed in November 2015 is rightful recognition by way of a Good Guys/Roadster Shop Style and Design Award.

“This Mustang, however, would end up changing all of those tentative plans. I decided I’d do as much of the work as I could, and rented a small spot in an old wash bay behind my friends’ shop, Best of Show Coach Works. With the bare shell of a body on a chassis cart, I got to work. When building the body of track car from the ground up, you build around the wheels. Knowing I wanted to run a “square” 315mm-wide tire setup, I got to work cutting the fenders. I pulled one fender out, tacked it together, stood back and couldn’t live with how much the look ruined the body lines of the car. So I proceeded to cut the doors open and stretch them out, a project that took me the next several months, and involved numerous attempts of design and craftsmanship because I had to learn how to do everything. After that, the rest is pretty much history. The design part of my brain took over, and I continued to slave away on the car, often times redoing parts until I felt every piece of the design worked towards being my idea of an updated and alternative vision of a 1965 Shelby G.T. 350.”

“As far as my metal working skills had come, bodywork was not my forté. When it came time to paint, I managed to convince my good friend, Jon Lindstrom, who was the original painter at Best of Show Coach Works, to hop on a plane and leave Hawaii to come back to San Diego and sand on my car for two months, (car people are not normal). Jon sanded his fingers off until he had to return home. From there Best of Show’s then current painter DJ Parobek laid down the iconic white and blue color. From there it was a non-stop thrash to finish the car for display with SPEC Clutches at the 2015 SEMA Show.”

The Coyote Boss 302 engine has Ford Performance Cobra Jet cams and a Cobra Jet intake manifold with a custom ram-air style CAI (cold-air intake). The exhaust system includes Detroit Speed 1 7/8-inch stainless headers, custom stainless 3-inch oval tubing and MagnaFlow mufflers. Matt reckons about 550 horsepower coming from the Coyote 5.0 and it’s channeled through a Tremec TR-6060 from an S197 Shelby GT500. The six-speed manual is fitted with an MGW shifter and there’s also a transmission cooler in one of the rear quarter-panel vents. From there a 9-inch with a Truetrac differential and lightened, REM polished 4.30:1 gears put it to the ground. An internal pump and a gear-oil cooler in the other rear quarter panel opening are also utilized.
Elegance Auto Interior did the trim and design work inside with Art of Sound stereo equipment also integrated in. Other bits include really cool Speed Hut gauges, 2005-2006 Ford GT seats, and a five-point roll bar.

“As much as I could ramble about the technical details of the car, the build has been about much more. It’s allowed me to build not only a skill set and base-of-knowledge, but ultimately a career working among good friends. In early 2017 I made the move to head Best of Show Coach Works in a transition that would bring back both Jon and DJ.”

So there you have it. Not only did Matt complete the build of a truly sensational early fastback street/track car, he got his career steered in the direction he really wanted it to go. And for that alone we commend him. As for the car? Well, it’s pretty badass, too. And if we ever win the lottery, we’ll have BOS build us one just like it.

Out back Matt went with a Maier Racing suspension system that utilizes a Watts link and a torque arm. JRi double adjustable coilovers mounted transversely inside the car dampen the rear suspension. Up front is a Detroit Speed Engineering Aluma-Frame setup that includes a unique cast-aluminum cradle and tubular upper and lower control arms, DSE’s rack-and-pinion steering, and JRi coilovers.
As Matt mentioned, he didn’t go with a stagger on wheel and tire sizing; it’s a square arrangement with the same size at all four corners for all-out grip on a race track or parking-lot slalom course. That means Forgeline GZ3R 18x11-inch wheels with ginormous BFG g-Force Rival S P315/30ZR18 tires, front and rear. The brakes are Stoptech Trophy STR60 fronts and ST43 rears that include 6-piston front and 4-piston rear calipers.
Matt is friends with Brennon Hope who owns the 1968 G.T. 500 also shown here that’s powered by a 1,000-horsepower twin-turbo 401-inch Windsor. It was featured in the March 2017 print issue of Mustang Monthly and can also be seen here on www.mustang360.com/featured-vehicles/1612-1000-horsepower-all-purpose-1968-mustang-g-t-500.