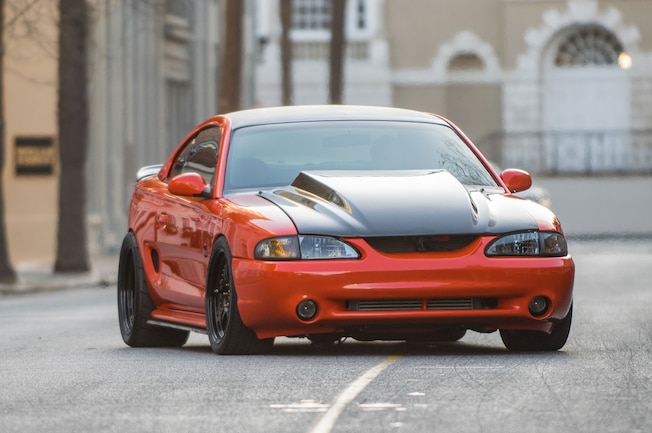 Let’s be honest. Mustangs are a dime a dozen, and there is a good chance that you were in traffic with one today. Although there are many different generations, colors, and combinations, sometimes it can be a process to really make your Mustang stand out from the crowd. Some may just slap on some Bullitts and a cold air kit and call it a day, and others leave no stone unturned.

Just take one look at this orange SN95 and try to convince us that it isn’t jaw-dropping. Meet Jonathun Catapano’s 1998 SVT Cobra. At one time it was just your normal 100,000-mile Cobra longing for the glory days of its 1990s youth.

Catapano, of Charleston, South Carolina, believes the SN95 just isn’t appreciated enough, and we can agree. “The SN95 (1994-1998) really gets no love most of the time,” he wrote. Other models may be more popular, especially with the Coyote motor pushing out some serious numbers straight out of the gate. But you can’t say there isn’t something seriously refreshing about a slick SN95 Mustang, and this SN95 SVT Cobra slathered in Hugger orange is as slick as it gets.

Catapano’s custom Hugger Orange snake was given the full Maximum Motorsports treatment with upper and lower control arms, front sway bars, valved Bilstein front struts and rear shocks, coilovers, subframe connectors, a bumpsteer kit, and a K-brace. It also includes a complete solid bushing kit and a solid-mount framerail mount. The IRS setup was swapped over from a 2004 Cobra.

Besides the Cobra, Catapano’s heart belongs to a 1987 GT that has been off the road for the past two years. It currently resides at the shop of his friend, Billy Wenk, owner of Wenks Auto Body in Advance, North Carolina. Wenk is helping Catapano build his dream Fox.

Catapano says, “My real passion and build is my 1987 GT that currently is a work in progress. We took a lot of the things I liked about the orange car and are putting it into the Fox build, so I spent a lot of time looking over this car for ideas.”

Going through Mustang withdrawals, Catapano decided to look for another Mustang to have fun with while the Fox was out of commission. Initially he was on the hunt for a 2003-2004 Terminator, but right before he was about to pull the trigger on one, he received a text asking if he knew of anybody that would be interested in the orange 1998 SVT Cobra owned by Wenk. “I couldn’t pass up the opportunity,” says Catapano. “We negotiated a deal, and to make a long story short, two days later I picked it up.”

Jonathun Catapano 's 1998 SVT Cobra retains the 289ci motor that he built up and topped with a Vortech YSi supercharger. The engine bay has been shaved, with all the wires tucked for a superclean yet mean appearance. Catapano says, “I have some additional plans for the car and would like to get the boost up to 18 psi and be over the 700-rwhp mark.”

The engine was built by Wenk and HBI Auto of Mocksville, North Carolina. Retaining the 289ci motor, the Kellogg crankshaft uses Carrillo rods connected to Carrillo pistons. Topping off the block are Stage 3 Race ported “B” cylinder heads and Todd Warren custom ground cams to open and shut the oversized Manley stainless steel valves. Other engine modifications include a coil-on-plug (COP) conversion, “C” head valve covers, a shaved and ported “B” intake manifold, and 80-lb/hr injectors. Exhaust gases flow through BBK long-tube headers, back to a Bassani X-pipe, and a cat-back exhaust system exiting through 3-inch pipes.

Bolted to the mill is a Vortech YSi supercharger cranking out 9 psi of boost to help this pony reach a stout 600 horses and 457 lb-ft of torque. To help put the power to the ground is a Tremec T56 Magnum transmission paired to a McLeod RXT clutch. The rearend is beefed up with an IRS suspension swapped from a 2004 Cobra stuffed with Ford Performance 4.10 gears on OEM 31-spline axles. The suspension was given the full Maximum Motorsports treatment with front control arms, front sway bars, valved Bilstein front and rear shocks and struts, coilovers, subframe connectors, a bumpsteer kit, and a K-brace.

Other body modifications include Carbon Driven carbon fiber side skirts, a Saleen rear spoiler, an AIT carbon fiber 3 1/2-inch cowl hood, Export side folding mirrors, a carbon fiber–wrapped roof, and tinted lights and windows all around. The carbon fiber accents provide the perfect contrast to the bright orange exterior.

“When I bought it most of the work had been done,” says Catapano. “I changed out the interior, put on the new hood, wrapped the roof, made some tune adjustments, and did a couple other odds and ends.”

This superclean interior was swapped out from a 2004 Cobra, giving it a bit more modern and sleek appearance.

He swapped out the stock tan interior of the 1998 Cobra with a 2004 Cobra interior with charcoal-colored front and rear seats along with a 2004 Cobra conversion dashboard, center console, and door panels. Also inside is an NRQ Quick Release for a Sparco/Ford Performance steering wheel and hydro dipped instrument panel, door pulls, airbag delete, and a battery relocation kit.

“It’s a blast to drive, and it sounds and performs amazing. You can never go anywhere without someone taking a picture of it, riding by with a thumbs up, or wanting to know everything about it,” Catapano says. “I love how people react when they see it for the first time. It starts great conversations and gets people excited about the SN95.”