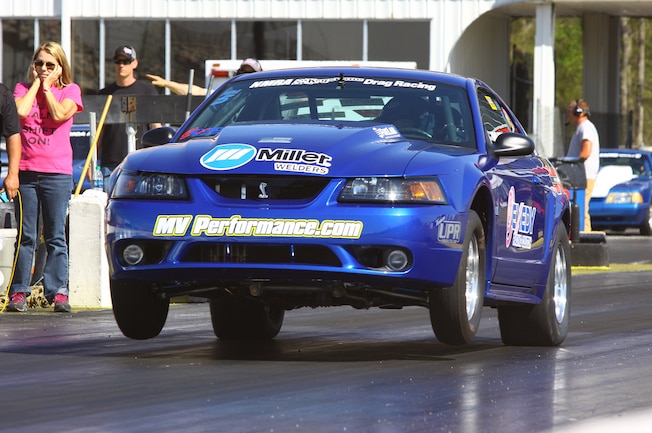 Drag racers are always looking for ways to make their program more efficient, more consistent, and maybe more importantly, quicker. They add the lightest engine pieces, the beefiest transmission components, the sturdiest rear end parts, and the most aerodynamic exterior bits. But another aspect to get equal attention from racers is the electronics part of their race cars. Instruments and gauges that help keep tabs on those ultra-expensive drivetrain components are equally as important to all racers.

Prior to the 2017 NMRA/NMCA All-Star Nationals at Atlanta Dragway, Modular Muscle racer Gary Parker added a Racepak IQ3 display dash to help him fine-tune his program. Gary’s already enjoyed tremendous success racing with the NMRA, but even he recognizes the need in order to stay on top of his game.

Since he already had Racepak’s Sportsman data logger, Gary added the IQ3 display so he could get more accurate temperature readings to maintain his car car’s consistency, since that is the name of the Modular Muscle game. “I set it up to display everything I log on my Sportsman data logger,” Gary says. “Currently it shows me RPM numerically and as a sweeping tach, air/fuel ratio, fuel pressure, volts, and water temperature.”

This is Gary’s page one, which are also the same values he looks at via his car’s Racepak Sportsman data logger. He has three more pages he can set up with different measured values, and as time goes along, Gary will fill those in to fine-tune his combination further.

You can set up the IQ3 with different pages, as the company calls them, for monitoring different mechanical functions. There are four pages with the IQ3, but as of the All-Star Nationals Gary had only one page set up, and he even had a couple values he can add to his first page. “I just realized there are other things I log, but I don't display,” Gary says. Driveshaft rpm, things like that, but I will be adding oil pressure, transmission fluid temperature and other things.”

If anything, Gary says the IQ3 gave him more confidence in his ability to keep the car consistent. Gary’s initial results speak for themselves. His first race, the All-Star Nationals, he made it to the finals. Coincidence? Maybe, but we’re sure Gary will take a finals appearance any day.