We get behind the wheel of an original Hertz Shelby G.T. 350 and its owner’s Revology Cars replica version 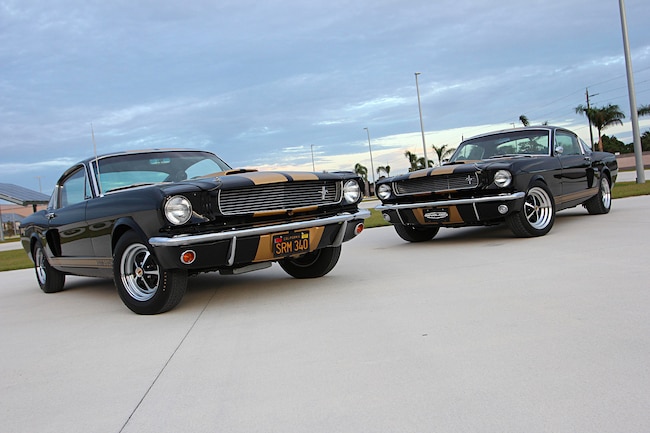 Over the last few years we’ve seen all manner of custom Mustang builds come across our desk (or computer screen as it may be). From home built cars to high-end pro shops, and everything in between, we’ve laid our eyeballs on a lot of Mustangs stuffed with trick suspensions, Coyote 5.0L engine swaps, interiors nicer than our living room, and more. Builds like these don’t come cheap, and for many of us they’re more or less aspirational projects that we can come away with ideas for our own Mustang project. Wheels, stance, paint treatments, and so forth are all things we’ve seen copied from the big buck builds, which is why we feature such cars from time to time both here on Mustang-360.com and in the print edition of Mustang Monthly.

Recently we had the good fortune to receive a phone call from Tom Scarpello at Revology Cars in Orlando, Florida. Tom’s company was in the process of delivering its first replica Shelby G.T. 350 Mustang to its new owner. The owner, Mark Pieloch, commissioned the Revology Shelby in the traditional 1966 Hertz black and gold scheme to bookend his real 1966 Hertz Shelby G.T. 350 that is part of his vast collection at the private American Muscle Car Museum in Melbourne, Florida. Since yours truly is based out of Florida it would be a simple overnight trip to meet up with Tom and his crew as they delivered Mark’s new Revology Shelby. Not only did we get a private tour of the American Muscle Car Museum (you can watch a video of our tour HERE) but Mark was gracious enough to let us pedal both of his six-figure beauties around the museum’s private property.

As you can imagine, there are two entirely and completely different cars, though sitting side by side the casual Mustang fan might thing they’re one and the same. Of course the original Shelby had the nostalgic clatter of its K-code Hi-Po solid lifters, old bias-ply tires, and vague steering feel, but if you’re a classic Mustang enthusiast you’ve come to almost appreciate those things. That said, the typical clientele of Revology doesn’t want nostalgic handling and braking. They want the nostalgic look with modern day performance car handling, braking, and even comfort and convenience bits, but tucked away out of sight as to not ruin the appearance of a classic Mustang. Well, Revology is certainly firing on all cylinders with their replica Mustangs and Mark is so happy with his Hertz Shelby replica he’s commissioned Revology to build two more replica Shelbys for his collection that will also bookend original cars! Flip through the photo gallery and compare for yourself and enjoy the video we put together comparing the two cars.

First out was the original 1966 Hertz Shelby G.T. 350. This car is a documented Hertz rental with the C4 automatic and has had a full restoration with all the correct parts. This means the Shelby suspension, OE tires, and more. The Hi-Po sounded wonderful and had decent power, but we found the original style suspension and tires severely lacking in cornering and braking. To think these rides were track stars in the 1960s is truly amazing.
Following the original Shelby around the impromptu track the museum staff setup, the Revology Cars Hertz Shelby G.T. 350 replica was obviously faster with its 5.0L Coyote and nearly 200 more horsepower. A much wider and stickier tire package, along with a suspension that was firm yet didn’t beat you up, meant the Revology’s cornering and braking was on point. We pointed the car where we wanted it to be and it went there with no drama.