No, the Other One 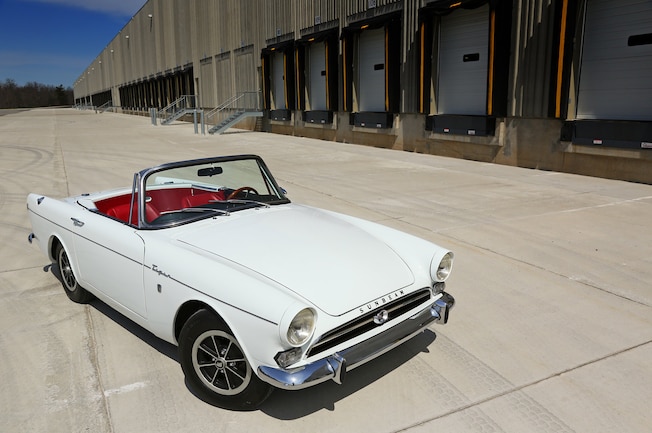 Compact dimensions and the weight savings of its thin-wall block design were hallmarks of Ford’s new Windsor small-block V8 series upon its debut in 1962. It soon became obvious the little Windsor offered underhood packaging and weight distribution advantages that its cross-town V8 competitors simply couldn’t match, advantages that initially helped land a 260 small-block between the frame rails of Carroll Shelby’s soon-to-be famous Cobra. Before long, however, those same Windsor attributes would work just as well in the not-quite-so-famous Sunbeam Tiger.

Like the AC Ace that morphed into the muscular Cobra, Sunbeam’s Alpine roadster was a good-looking but sluggish British sports car in need of a more sporting engine. When the Series I Alpine debuted in 1959, it was saddled with a 78-hp, 1.5L four-banger that could barely drag the 2,200-pound ragtop to 60 mph in 13.6 seconds. Some glaciers moved faster. While perhaps adequate for England’s winding lanes and cramped cityscapes, such tepid performance was hardly inspiring in North America’s wide open spaces – especially amid the horsepower frenzy that was taking hold in the early ‘60s.

A division of England’s Rootes Group, Sunbeam’s management team rightly figured that more manly thrust could broaden their roadster’s market, especially in America, but the company lacked resources to develop a new engine by itself. The team began looking around for viable engine suppliers to muscle up the real estate between the Alpine’s front fenders. Various powerplant configurations were seriously considered, but sometime in 1962, Formula 1 champion, Jack Brabham, reportedly suggested to Rootes’ competition manager the idea of harnessing Ford’s new lightweight V8. Rootes’ North American subsidiary saw merit in the idea and approached none other than Carroll Shelby to engineer a proof-of-concept vehicle to determine the viability of shoehorning an American V8 into the Alpine’s diminutive British engine bay. After all, he’d done it before.

Shelby’s fee for the experiment was reportedly $10,000 and, commencing in April of 1963, Phil Remington and the Shelby American crew took just one month to transform a stock Alpine into a running prototype of what would soon become the Sunbeam Tiger, fitted with a 260 small-block and four-speed T-10 gearbox. And yes, the swap was a packaging challenge, requiring among other things some “relief” of the firewall, as well as changeover of the Alpine’s old recirculating-ball steering system to a more space-efficient rack and pinion setup. Still, the resulting prototype was a hit with Rootes execs on both sides of the Atlantic, and Lord Rootes himself decided that the new V8 roadster would debut at the 1964 New York Motor Show.

After contracting with FoMoCo for an initial supply of three-thousand Windsor V8s, Rootes management then had to decide where to assemble Sunbeam’s new Tiger – and this is where any parallels to the Cobra story start to diverge. The build contract did not go to Shelby American, but instead to England’s Jensen Motors (which had just finished building Volvo’s P1800 sports coupe, and would eventually go on to produce its own Chrysler-powered Interceptor.) Even so, Carroll Shelby reportedly received a royalty on each of the more than seven-thousand Tigers subsequently built. Incidentally, production methods at Jensen included using a sledgehammer to clearance the already-painted firewall for the new powertrain. Imagine suggesting that approach today.

Production of the Tiger began in June of 1964 and, even at just 164 hp through the stock 260’s two-barrel carb, the Tiger was over twice as powerful as its four-cylinder cousin, at a weight gain of only around twenty percent, with the result being a full five seconds knocked off an Alpine’s 0-60 times. Shelby’s rearward positioning of the V8 produced good weight distribution of around 52/48 front/rear, and Tiger handling received glowing reviews, despite tires which, at 4.90x13, can only be described as puny. On the suspension, the only things differentiating Alpines and Tigers were the latter’s slightly higher spring rates and a Panhard bar added to laterally locate the upgraded Dana 44 rear axle. Like the prototype, very early production Tigers came off the line with Borg Warner T-10 gearboxes, but a running change was made to use Ford’s four-speed Top Loader when it became available. Upon arriving on America’s shores, the Tiger was priced at just $3,499 - about half the price of a contemporary Cobra.

Though ultimately not as feared and revered as the Cobra, Tigers were rallied in Europe and road raced on both sides of the pond with considerable success. Yet, surprisingly, the V8 Sunbeam perhaps left its biggest competition mark in drag racing, where a Tiger established an AHRA class record of 12.95 seconds at 108 mph and held it for two years (1965 through 1967.)

Tiger enthusiasts divide its three-year production history into three variants: the MkI, MkIA, and MkII. Around 6,450 MkI and MkIA Tigers were built between 1964 and 1967. All were 260-powered, with the later ‘A’ version differing primarily in trim and small body details. In 1967, the restyled MkII, or Tiger II, debuted with a more potent 289 onboard (200 hp, still with 2V carburetion,) but only 633 (or 533, depending on whose numbers you believe) were assembled before Rootes’ new owner, Chrysler Corporation, pulled the plug on the whole program. Understandably, Chrysler cringed at selling a car housing a FoMoCo engine, and none of its own V8s would fit, so the Tiger quietly passed into extinction.

Featured here is a Tiger MkI, currently in the Legendary Motorcar collection in Ontario, Canada. It was rotisserie-restored after apparently spending 37 years in a Texas barn, and wears some options that were unique to USA-delivered Tigers. These were called LAT, or Los Angeles Tiger options. The most visible of these are its cast alloy wheels (LAT 9), which replaced the factory steel rims. More important to enthusiasts is its LAT 1 upgrade, the Super Induction Kit, that ditched Ford’s iron intake and 2V carb for a 4-bbl Holley on an aluminum manifold. Performance is further enhanced by LAT 53, which replaced its original 2.88:1 ring and pinion with a 3.54 gearset, wisely augmented in this case with LAT 50, a limited-slip differential.

We spent some time behind the wheel during our photo shoot. Humans were definitely smaller when this platform was designed in the 1950s, so folding our six-foot-two body into place was a bit of a challenge, though certainly no more so than in a contemporary Cobra. But once behind the wheel and used to the narrow pedal spacing, we wanted to stay put, as the Tiger proved to be an agile and torquey feline that roars through its twin rear pipes, yet has an upscale touch thanks to its handsome wood dash and Nardi steering wheel. And, considering that an original small-block Cobra in similar condition could run you a couple million bucks these days, Legendary’s asking price of $139,900 seems like a bargain - if you’re Tiger hunting. 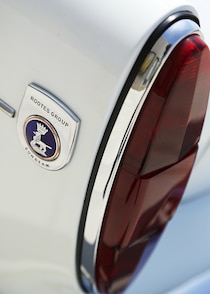 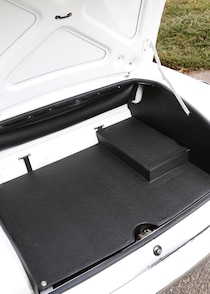 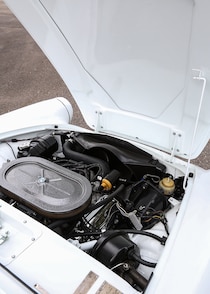 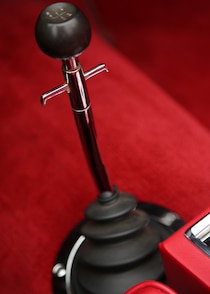 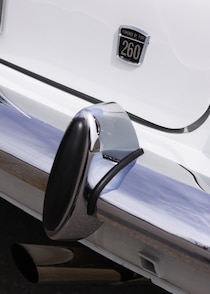