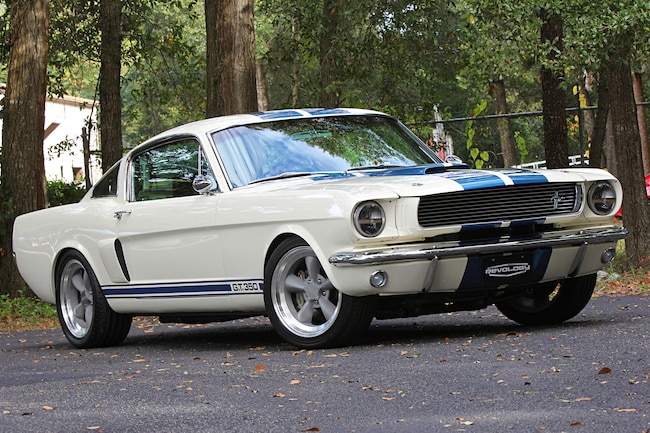 The Mustang hobby has certainly come a long way from when Mustang Monthly printed its first issue nearly 40 years ago. Back then, people were “restoring” Mustangs with good used parts and lots of elbow grease. Over the years, as the hobby grew and the demand for replacement reproduction parts grew along with it, catalogs began to arrive in our mailboxes with parts like emblems, bumpers, sheet metal, and upholstery covering its pages.

Eventually, the hobby became so big you could pretty much completely restore the typical 1965-1968 Mustang from a catalog, as long as you had something to start with. Then about 10 years ago, the folks at Dynacorn blew everyone’s minds by releasing a fully licensed replacement Mustang body shell. At first, it was a 1967/1968 fastback. Later, the company added the 1965/1966 and 1969/1970 bodies to its assembly line. Now, even if you don’t have a Mustang body to begin on, it is safe to say you can build the Mustang of your dreams with all new parts.

Today, the hobby seen an amazing new high thanks to Tom Scarpello and Revology Cars [www.revologycars.com]. Tom, who once handled product planning, PR, and marketing for Ford’s SVT division, considers himself the “Head Revologist” at Revology Cars. There they build complete turnkey ready Mustang replicas for discriminating clients worldwide in a unique OE-like assembly-line format. Yes, we just said the word “replica.” Much like the Shelby Cobra replicas, Revology Cars constructs a ready-to-drive (and fully warrantied, we might add!) 1966 Mustang. The lineup includes a K-GT in fastback or convertible body style, and its latest is the fully authorized and licensed replica of the 1966 Shelby G.T. 350. A 1967 Shelby G.T. 500 is in the works as we write this, too.

Sure, a Revology Cars replica Mustang isn’t an inexpensive purchase. We’re talking six-figures-plus, especially when you start ticking all the cool option boxes. But if you have the coin for such a ride, when you do the math, a Revology Cars replica Mustang is actually a better deal than having a high-end shop build you that Mustang of your dreams. We’ve seen such dream rides at the SEMA shows and with custom parts, labor, and more, you can easily climb over $200K! The Revology Cars assembly-line process streamlines the labor. Plus just as you would order a new Mustang from your Ford dealer, buyers select available colors, options, and packages, which allows some level of customization without upsetting the assembly-line applecart—so to speak. Best of all, Revology cars can start with a real Mustang body (even yours) or a Dynacorn body.

The 5.0L Coyote engine looks like a factory installation due to how Revology Cars has engineered and refined its installation process. We’re not talking a simple shock tower removal and Mustang II suspension swap here. No, a lot has gone into engineering every facet of the conversion. The cooling system, wiring systems, exhaust, and more have been designed for the cleanest installation with service and maintenance in mind.
Revology Cars uses a Hydratech hydraulic-assist unit. This provides not only a super-clean firewall but also allows power-assisted braking without the need for a large-diameter brake booster, which would be in the way of the wide modular engine’s driver’s side cam cover. You can see the small hydraulic reservoir to the left of the assist unit for the hydraulic clutch.

The 1966 Shelby G.T. 350 replica you see here was presented in the huge Ford booth at the 2016 SEMA show. Revology Cars was invited to display a model of its replica Mustangs as part of the retro-heritage theme for that Ford display. The booth included the 50th anniversary of the GT40’s 1-2-3 Le Mans finish (Ford also exhibited one of the original winning cars, along with a just-raced and still dirty 2017 Ford GT race car, among other vehicles).

“Credit goes to Denny Mondrach, now retired, who was at the time restoration licensing manager for Ford, with Ford Component Sales. Denny presented the idea internally, and happily, it was well received by the rest of the Ford team. After Denny retired, Kevin Powell of FCS and Kevin Keling of the global auto-show team continued to support us. Next thing you know, there we were at SEMA,” Tom says.

With the SEMA show a scant six months away, it was all hands on deck at Revology Cars to build this G.T. 350 licensed replica. To really push the company’s staff, Tom opted to throw the option sheet at this build to demonstrate to SEMA-show attendees the scope what is possible with a Revology Cars replica. In typical SEMA-project fashion, employees toiled away on the car right up until the transport trailer arrived to pick it up for the trip west to Vegas (we’re betting the paint was still wet, too).

This Revology Cars G.T. 350 interior features the optional Premium Interior Package and wool carpeting selections. Just about every piece of interior trim is covered in rich nappa leather or Alcantara material. The power seats have a manual recliner and feature ample support.

Revology Cars’ Shelby replicas are built with the full blessing and licensing of Shelby American and Shelby Licensing. Not only does each Revology Shelby receive a CSM number, but it is also entered into the Shelby registry, just like a Cobra, classic Shelby Mustang, or a new Shelby built at Shelby American’s Vegas facility. These are hand-built cars in the same vein as the originals but with modern performance, handling, braking, safety, comfort, and convenience features carefully woven into the classic lines of the 1966 Mustang body. Frankly, a casual car enthusiast might not be able to tell the difference between an original 1966 G.T. 350 and a Revology Cars replica until the hood is raised or perhaps if each car is driven back to back (which we have!).

Standard components of the Shelby G.T. 350 replica from Revology Cars include a 450hp 5.0L DOHC Coyote V-8 engine, the same one found under the hood of the 2015-2017 Mustang, which is backed by a Tremec sourced T-56 six-speed transmission (a four-speed overdrive automatic is optional) and a custom 9-inch rear axle with 3.89 gears wrapped around an Eaton Tru-Trac differential. The modernization under the classic skin continues with a custom front crossmember employing unequal-length tubular control arms, coilover shocks, a three-link rear suspension out back, and Wilwood-sourced large diameter slotted four-wheel power disc brakes with six-piston calipers up front and four-piston calipers aft. The power assist comes from a modern and compact Hydroboost Brake Assist System, which is powered by the power-steering hydraulics. That means no bulky vacuum booster is required, freeing up much needed engine-bay space for the massively wide modular engine.

Safety is also a top selling point for the Revology Cars replicas. The thought of driving a 1966 Mustang in today’s high-speed traffic with its distracted drivers and other road hazards can be enough for you to keep your classic Mustang in the garage. But in the Revology Cars replica, Mustang safety is just as important as performance, modern comfort, and convenience items. Included in all these types of cars are a collapsible steering column, door intrusion beams, three-point seatbelts, fuel-pump inertia switch, dual-circuit power disc brakes, and more, making them as safe as possible on the road.

The standard instrumentation is a five-dial instrument cluster filled with vintage-look modern electronic gauges. The SEMA build G.T. 350 wears the optional R-model type six-gauge cluster. This deletes the Shelby-specific tach pod normally mounted on the dash and places the tach in the gauge cluster.
Audio systems range from a direct-fit vintage-look AM/FM four-speaker stereo to this optional 7-inch touchscreen system with navigation, Bluetooth, Sirius satellite radio, and more. Because the car was heading to SEMA, the G.T. 350 was fitted with this system. Here, the backup camera is being demonstrated as we parked the car to take photos.

The Revology Cars Shelby G.T. 350 wears a correct-looking Shelby 10-spoke wheel in a 17x8 front and 17x9 rear staggered fitment wrapped in Bridgestone Potenza S-04 rubber. This SEMA build, however, is wearing the optional V45 five-spoke in the same sizes with Revology Cars center caps. The 10-spoke wheel may be a more traditional and correct look, but you can’t go wrong with a classic five-spoke!

Revology Cars is cranking out complete turnkey replica Mustangs from its Orlando, Florida, location and currently has a waiting list of around six months. Although Tom is hoping to reduce that wait time dramatically in the near future with an expansion that will ramp up assembly-line speed. “We’ve had calls from buyers who want a car right now and are ready to buy, but we don’t really have inventory yet. Everything we’re currently building has been sold months ago,” Tom says.

Realizing not everyone can afford a complete Revology Cars vehicle, Tom has long been working on a performance part’s side of the business, as well as a restoration and installation section of the Revology Cars location (another reason he is looking for expansion property). Currently, the performance-part side is up and running, and you can see what they have to offer at www.revologyperformance.com. The 1967 Shelby G.T. 500 is in the works to be Revology Cars’ next available model, so we have to wonder if a 1969 model isn’t too far off. Hey, we’d love to see a modernized Mach 1 or Boss 302, too. Wouldn’t you?