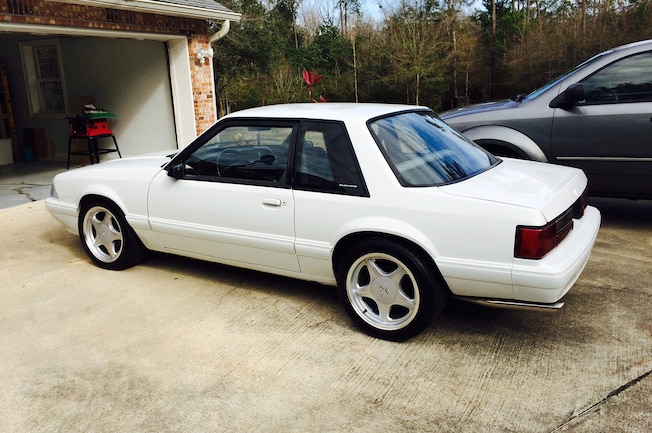 Matt Plavidal was born and raised in New Orleans, and started following Mustangs around the age of 12. Showing his age, the 1986 LX coupe, or notchback, depending on where you reside, just came out with the fuel injected 5.0 engine. Once Matt was old enough to drive, his dad, who was a cop wasn’t going to let Matt have a Mustang at that time. Instead, he would have to suffer through a few years with a 1990 Toyota Corolla.

Once he was able to get a Mustang of his own, he settled on a rough 1986 Mustang GT. “Car had a lot of problems and after sinking a bunch of money into it, I had to part ways with it,” Matt explained. He went back to his trusty Corolla until he graduated college in 1997. That is when he purchased a 1992 Deep Jewel Green LX 5.0 coupe with 8,000 miles on it. “I loved that car and I’m trying to locate it and buy it back,” Matt said. He owned the green coupe from 1997 to 2000, adding just about every bolt-on imaginable, including a Vortech S-Trim supercharger system.

Matt located a low-mileage, low-compression Ford Performance Aluminator engine and 4R70W transmission for the car, saving some money in the process. The previous owner had it in a 1999 GT, but took it out to sell the car with the stock engine. Matt hopes to add a supercharger, since the engine was built for it. “I’m looking for a car with show and go,” he says.

Fast-forward a few years, with cars coming and going, and in 2014 he was ready to own another Fox. He wanted an AOD car this time around, saying “I didn’t want to shift gears.” He decided on a coupe he found in Arizona. Matt had a lot of work done to the car when he received it, including redoing the car’s paint and body, and converting the interior from grey to black.

After some consideration, he decided to go the Coyote-swap route with the car, rounding up a low-mileage, low-compression Ford Performance Aluminator engine and a 4R70W engine. “It was a great deal considering it had 2,000 miles on it and was cheaper than buying new,” Matt says. He started buying parts to complete the car, like Florida 5.0 gauges, Pony R wheels, Baer brakes, transmission controller, long-tube headers, and the like.

To smooth out the engine compartment prior to adding the Coyote engine, Matt outfitted it with Scott Rod Fabrications contoured inner fender skirts. The former white coupe is getting a color change to Bright Calypso.

Currently, the car is undergoing its second round of metal work, along with the application of Bright Calypso paint. Once the paint is finished, the Coyote engine and 4R70W transmission will be added, as will new fuel lines, brake lines, and all support systems. “The car should be completed by July or August of this year,” Matt says.

Good luck Matt and we look forward to seeing the finished product.