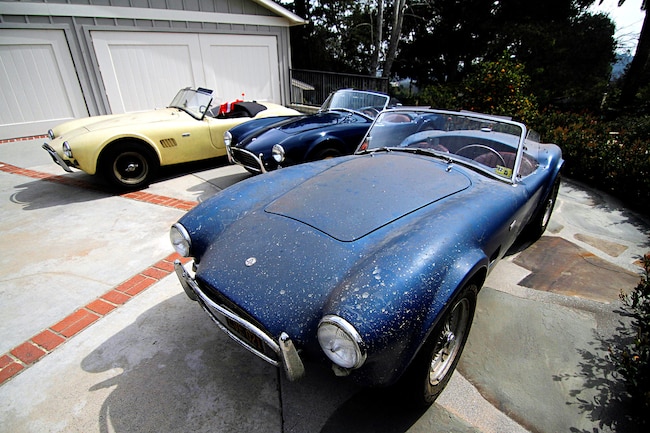 Lynn Park loves his Cobras; in fact he loves all 10 of his original Cobras and all five of his Kirkham Motorsports Cobra replicas, and his latest aluminum-bodied Kirkham has everyone fooled. Completed just last December, Lynn's latest Cobra was put together with every old Cobra part Lynn could find around his garage or from his friends. This one looks like it just came out of the barn, but it didn't.

Lynn fell in love with Cobras from the very moment he saw one pictured on the cover of Road and Track in 1962, and ever since, he has owned a Cobra. Over the past 55 years, Lynn has had over 50 Cobras in his stable, and that’s why he has become known as “Mr. Cobra” in our hobby.

Lynn has been fortunate to keep some of his favorite Cobras and every once in a while something very special comes a long, prompting him to sell one to get another. Though he has an impressive collection today, he began his Cobra addiction humbly—when he couldn’t afford an original Cobra back in the 1960s, he built his own from an AC Aceca coupe. Lynn next picked up a couple of wrecked original Cobras and restored them and prepared both to race condition, and has been vintage racing them since the late 1970s.

Those “rock chips” were carefully created by Lynn with taps from a welding hammer.
The taillights, bumpers, and many more parts are cast-offs from previous real Cobras, so there is plenty of original Cobra patina on Son of Dirt Bag.

In 1992 another Cobra collector, Don Lee, purchased an original Cobra with 33,000 miles that had been parked in a back yard under a blue tarp for over 20 years. The Cobra was owned by Charles Offenhauser, a relative of the Offenhauser Automotive Performance Manufacturing Company. Don showed Lynn the Cobra (CSX2307) and wanted to make a race car out of it. They realized the cost to do that would be too expensive, so Lynn cut a deal with Don and purchased CSX2307, while Don bought a full-race Cobra instead.

Back in the 1990s no one knew what to do with a beat up old Cobra except restore it, but Lynn appreciated the car’s originality and left it alone, displaying CSX2307 at Cobra Day at the Petersen Automotive Museum, to the dismay of many who did not know what to think of this neglected and abandoned Cobra. The exception was Carroll Shelby, who saw Lynn’s Cobra and thought it was “neat” and told him to leave it the way it was. Considering the “Father of the Cobra” recommended leaving the Cobra in this derelict condition, Lynn was inspired to get the old Cobra in running condition without disrupting any of the dilapidated parts. So in 1997 he got the engine running without tearing it apart, reconditioned the brakes and clutch assemblies, and replaced the shredded seats with a pair of old used seats that were still tattered and shabby. CSX2307 was nicknamed “Dirt Bag” and it has attracted a large number of admirers over the years due to its all-natural state of decay but complete functionality.

Other than the body and chassis, much of the parts on the car are original Cobra items.

If you own only one Cobra, you want it to look good, right? Well, Lynn has a garage full of 289s, 427s, street and race Cobras, and even a Dragon Snake “El Cid” once owned by Carroll Shelby himself, so he can afford to drive around in “Dirt Bag” every once and a while.

A few years ago Lynn started building Kirkham aluminum-bodied Cobras to pristine condition when he decided to go a different direction, no doubt inspired by Dirt Bag. Starting with a Kirkham Motorsports 289 Street Cobra, he gathered up all of the old parts he had stashed away from his own Cobras. Most of these were parts that no one would ever consider putting back on a real Cobra, but they were perfect for his new project—to build a new Kirkham Cobra to look exactly like a barn find—and Lynn had the talent and experience to accomplish his goal.

Lynn has a unique method of spraying “fake rust” from a spray bottle to help pull off his deceptive Cobra.

Lynn’s Kirkham replica started with a slab-side aluminum body, frame, transverse leaf spring suspension, floors, and gas tank. From these beginnings Lynn installed dilapidated Cobra parts from his garage storage, friends, and eBay to create his deception. The foot boxes are old, the radiator was welded up and unsightly, and the exhaust was off of an original Cobra as were the grill, bumpers, headlights, and taillights. All of the gaskets are cracked, there is rust and corrosion everywhere, the carpet is threadbare, and the seats are tattered. The wire wheels were purchased from SAAC conventions over the years, the dash was removed from a friend’s Cobra during a restoration, and the original style Stewart Warner gauges were discovered on Ebay. The 289ci Ford was just an old motor Lynn got from Les Linley four or five years ago that he freshened up and is backed by a dirty old bellhousing and a 5-speed transmission with an iconic Cobra short, reverse-lockout linkage.

Even the valve covers are fake; Lynn had a machinist friend hollow out the letters to look like original Buddy Bar Cobra covers. The rust under the hood? Lynn is now an expert on making his own rust in a spray bottle to create the appearance of years of water leaks all over the engine compartment. The exterior paint was mixed with an abundance of flat and then left outside exposed to the rain and sun for months. For the finishing touch on the exterior, Lynn blasted up Angeles Crest Highway near his home after the rains and looked for every mud puddle to cover the entire car with grit and make the brand new tires look old and weathered. The rock chips where artfully positioned with a welding hammer. Lynn’s new Cobra is known as “Son of Dirt Bag” and it never fails to get attention everywhere it goes.

This is Cobra CSX2307, affectionately named “Dirt Bag.” Hey, when Carroll Shelby tells you to leave the car alone, you leave it alone!
When parked next to a pristine Kirkham Cobra (foreground), Son of Dirt Bag (rear) looks old and beat, but it’s actually a new car than the other one.

Lynn has faced the question of preservation over restoration with all of the Cobras he has owned. His original “Dirt Bag” is a perfect example of preservation. Old cars are more recognized as art in their original paint, chrome, and interior proudly displaying the effect of time, use, and wear. Only Lynn Park; with his talent, experience, and passion for Cobras, could have pulled off the ultimate deception with his hand-built Kirkham Cobra “Barn Find.”

When asked which Cobra he decides to drive, Lynn remarked, “Whichever one is out front. They all run well”.

This Sick Cobra Blows Chunks on the Hoonigan Dock!

Mark Gearhart relives the time he took his Cobra to the Hoonigan Dock with Daily Transmission and how he subsequently broke that sick Cobra.