This 1998 Mustang Cobra is elegant & packs a supercharged punch

Black art: Leonardo da Vinci once said, “Simplicity is the ultimate sophistication” and that describes this 1998 Cobra perfectly 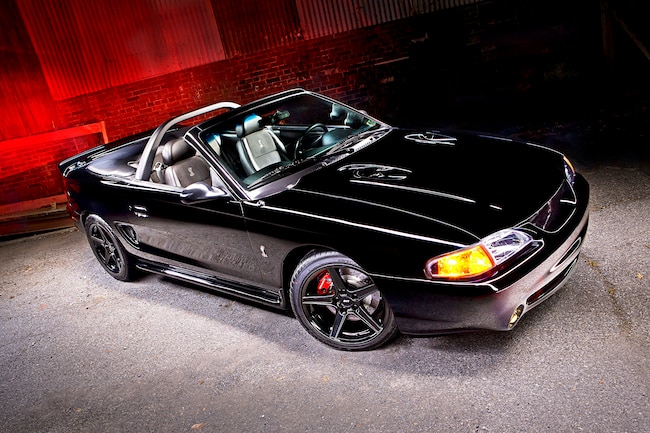 Right off the bat, Chris Raymond declared: “I’m not ashamed to say that I am a blown meth head.” So what does that meth say about our protagonist? From the onset, his idea was to keep the original mechanicals but beef them up to handle much more guff. After the initial rush of the 450 wheel-horsepower had faded, Chris soon searched for a bump, something to turn up the volume some more. The lure of an aftercooler loomed large.

“I loved the simplicity and look of the non-intercooled set-up, which lead me to chemical intercooling. The whole idea of water/methanol seemed like a no-brainer, simple set-up, no obtrusive piping in the engine bay and this seemed to fit the dark, sinister theme I had been working toward.”

Chris had begun the crusade in 2004 with a 1998 Cobra he found in the local classifieds. Some months later, he attended Mustang Week in Myrtle Beach. “That really opened my eyes to what I was missing,” he said. He went back to the Beach a couple more times. At this time, he said, V6 cars were putting out more than 300 horsepower, but his buddy’s ’93 GT with a ’04 Cobra motor really tipped him over the edge.

Chris chemically cool the charge air with a Snow Stage 2 Water/Methanol set-up. A 3.33-inch pulley, larger injectors, a sweet tune-up and with 12psi positive, the Mustang put 500 horsepower and 420 pounds-feet to the ground.

“It was fast, yes, but what I loved most was the detail work and the idea of creating a theme. Instead of the classy, clean and family-friendly Cobra I had, I went dark with a total black-out. The only spot of color would be beneath the hood.” He installed what parts he could and then turned it over to Eric Swarr in Collegeville, Pennsylvania, for the forged-guts motor. Swarr retained the forged crankshaft and added Manley pistons and connecting rods and sent the short-block components to local legend Gus at HG Associates in Limerick, Pennsylvania, for the machine work. Swarr Automotive left the cam timing alone. The cylinder heads, too. The bottom-end they secured with a Canton street/strip oil pan and a Milodon pump. Induction is enhanced by compressed air from a Vortech SQ SCi supercharger that produces 12psi of positive manifold pressure. For outgoing spew, Bassani mid-length headers, a catted X-pipe and SLP Loud Mouth mufflers are stitched into a 2.5-inch diameter system. Dave Guy easily produced 500 horsepower and 420 lb-ft of grunt at the wheels.

In black, the ragtop is a striking image, and offset by 9- and 10-inch Late Model Restoration hoops pressed with Nitto and Sumitomo rubber. The calipers are original, but the cross-drilled brake rotors are from Baer.

How to successfully put this largess to the tarmac? A Ram steel flywheel and McLeod pressure plate and clutch assembly precede the Hanlon Motorsports (St. Peters, Pennsylvania) custom-built T45 5-speed. Bob Hanlon put it together for the rigors of the pain locker and included a 26-spline main shaft conversion. A Ford Racing aluminum prop shaft sends the torque to the 4.10:1 ratio and limited-slip differential fitted with a Maximum Motorsports Panhard bar and a TA Performance low-profile girdle.

Though the 18x9 and 18x10 Late Model Restoration Saleen hoops appear to be pure, black holes in these images; they sport polished lips and do little to hide the Baer cross-drilled rotors under the OE calipers. The front rubber is 275/25; the rear scratches out with Nitto NT05.

Seats from a 2004 Cobra are complemented by custom-made dark suede boots for the shifter and parking brake. Chris amended the instrument cluster with ancillary meters for water temp, boost, fuel pressure and wide band A/F ratio.

For the dusky envelope, Chris lucked out. The original black was deemed “excellent.” He added a Saleen S281 wing and a CDC styling bar. The hood is original. He hopped up the interior with ’04 Cobra front and rear seats and a custom suede shifter and parking brake boot made to match the seats.

Chris rolls credits: “I would like to thank my wife first and foremost; she knows how important this car is to me and was always understanding all those weekends I spent in the garage with it. The Cobra would have been a lesser car without the help from my best friends Matt Schelkopf and Adam George, along with Eric and Jim Swarr and Dave Guy.

“Performance parts and horsepower numbers aside, it’s when the top is down and I am rowing the gears, hearing that sweet rumble of the exhaust echoing off the surroundings that all my troubles fade away. That is what makes all the time and the money worth it.”