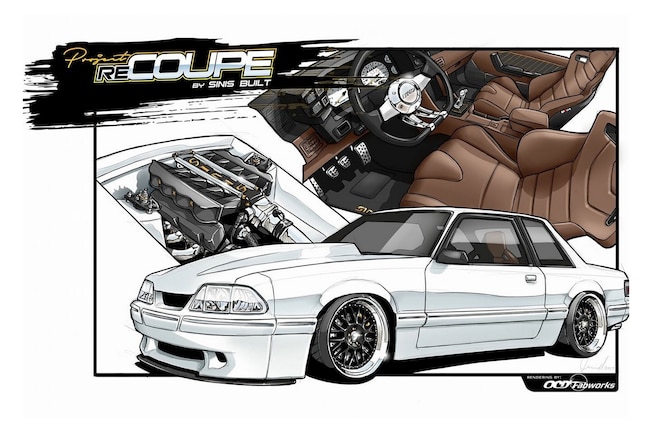 “The name reCoupe, if you want to know about that, has two meanings,” Tom Clark says. “First, this coupe has changed hands a few times and never been finished. So reCoupe is kind of like a new life for the coupe, meaning it will be coming back as something better than before. The second meaning is that this project will also get me back into the mustang stuff. It will allow me to enjoy another fox without it being and all out build if you know what I mean.”

As Tom says, the 1989 Mustang coupe has been through a couple owners recently, but he wants to be the one that brings it back to life. You can see by the rendering done by Dan McConnell from OCD Fabworks that Tom has pretty lofty goals for the car, but such goals are nothing new to Tom, who also is in the midst of a next-level 1979 Pace Car build. “The plan for Project reCOUPE is to build a nice driver; nothing over the top like my Pace Car,” Tom explained. “Something I can jump in with the AC on and drive anywhere, and I’ve always wanted a white notch,” he adds.

“The most exotic thing about the car will be the BXR intake, probably,” Tom says. Only those who’ve been around a while will remember the BXR intake. Go ahead, Google it, we’ll wait, but in the meantime the BXR intake was probably the most exotic intake ever made for Fox Mustangs. Tom plans to pair the BXR with a Ford Performance F-cam, and aluminum heads he hasn’t decided on as of this writing. Of course, every other bolt-on including headers and a full exhaust will also be on the car, but nothing that will take away from Tom being able to jump in and go at a moment’s notice.

The exterior will be simple, yet clean. “Not much has to be changed to make a good looking notch on the exterior,” Tom says. Tom plans to add a Cervini’s/Saleen front lower air dam with a custom lip, a Cervini’s LX bumper molding filler, color-matched body moldings, and tinted windows. We are in agreement with Tom when he says a Fox coupe doesn’t need much, and his mods are spot-on.

He plans to spruce up the interior with a two-tone black and brown treatment with Braum Elite seats, custom gauges, an Isotta steering wheel, a short shifter with a Twist Machine handle, and FatMat throughout to keep heat and noise to a minimum.

Tom plans to have the car presentable for the Carlisle Ford show June 2-4, 2017, and at Mustang Week in September. At those events you’ll be able to see if Tom has been able to reCOUPE the car’s former glory, and then some.

This is what Tom Clark’s reCOUPE currently like looks. If we know Tom at all, we know the car will look much better by Mustang Week. Once it’s all done it’ll have a Stiffler’s Fit-System, SN95 Cobra brakes, coilover shocks and struts, and 18-inch wheels. The car will be all white, including the moldings, as well.