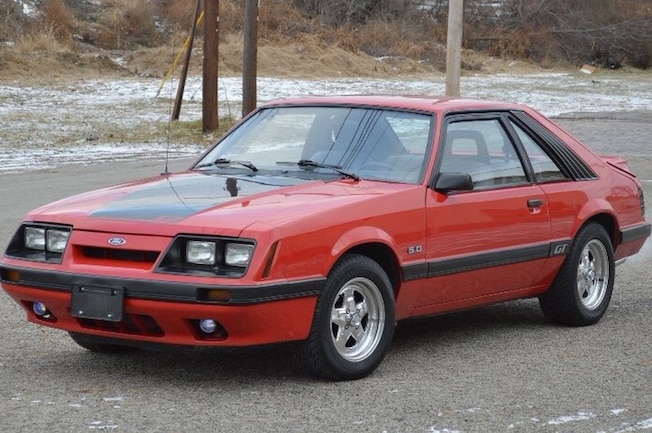 The great thing about building a Mustang is the number of directions you can go with the car. You can do a street/strip car, a killer street car, or a full-on drag car. These days you can even do a stock restoration, and be praised for doing so.

When it comes to Columbus, Ohio’s Tony Oliver, he’s still unsure of which direction to go with this 1986 Mustang GT. He just purchased it after selling his clean 1997 GT, which boasted an airbag suspension, CCW SP505A wheels, a Cervini’s hood, and a Mach 1 chin spoiler. The car was lightly modified from a performance standpoint, but it was detailed to a level unreachable by mere mortals; it may have been the cleanest, most well-detailed SN95 GT in existence.

Aside from a few painted engine items and the BBK Performance cold air intake, the powerplant is stock. Tony says the car runs really well, so he’s already ahead of the curve in that department.

After selling the GT, Tony bought a Fox coupe, but discovered his purchase was a little too much of a project, so he decided to unload it and continue the search. Shortly thereafter, Tony recovered by purchasing this 1986 GT. “I bought the car because of my love for Four-Eye Foxes in high school,” Tony explained. “The wild-looking, attention-grabbing guy in me wants to do a shaved and bagged Fox on 19-inch forged wheels with a clean engine bay, but the love of these Fox Mustangs wants me to get her looking like she just rolled off Ford’s assembly line,” he added.

This is the 1997 GT Tony previously owned, and it’s now owned by Andy Howard, who has big plans for the car. He already has a 2016 Coyote engine ready to go in the car, and he plans to transform the ride into the ultimate show/street cruiser. Tony provided him with the perfect canvas for such a build.

The great thing about the 1986 GT is that it’s pretty much stock, and in perfect running condition. It has a BBK Performance cold air intake, and that’s it. The body is in really good shape, but Tony is still thinking about a repaint, since the car does have a few scrapes and scars. “I’m kind of undecided as to what direction I'm going,” Tony said. In all fairness, we can see the conundrum ahead of Tony, because we would be in the same position.

What would you do if you were in Tony’s shoes?

This image was manipulated to illustrate the direction Tony may take with the Fox. By doing a simple repaint, throwing it in the weeds, and adding a killer set of wheels, along with a few performance goodies - that might be mission accomplished for Tony and we like it.