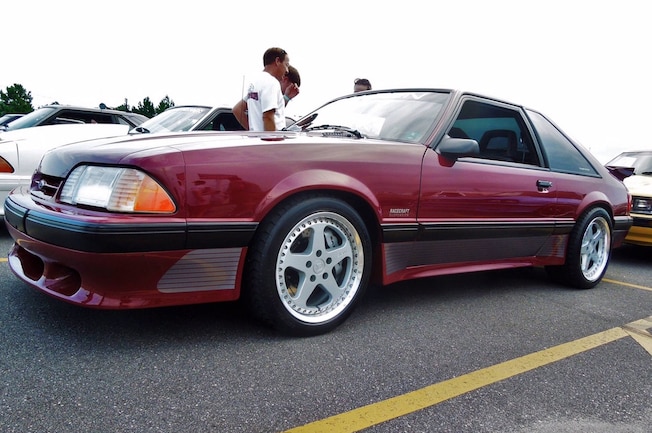 Even when we’re “done” building a Mustang, we’re never truly finished modifying it. Case in point, Travis Smith’s 1989 Saleen already has a boatload of modifications. It features a Vortech-supercharged Kuntz and Co. 337ci combination with a Ford Performance R-block, Roush-prepped AFR 205 heads, a custom Comp cam, a TMoss-ported Saleen intake, an MSD ignition, an Aeromotive fuel system, a Snow Performance meth kit, and a Meziere electric water pump. All told, the boosted small block is good for 691-rwhp thanks to a Powercurve Motorsports tune. However, if these mods are good, more mods won’t hurt, right?

Since Travis bought the car from fellow Southeastern Foxbodies pal Troy Raby, he had to change up a few things to make it his own. To that end, he sent the car over to Boosted Performance’s Donnie Salem for a few drivetrain upgrades.

A Tremec 3550 used to reside behind the Kuntz and Co. 337ci mill, but Boosted Performance’s Donnie Salem changed that out in favor of a Tremec T56 Magnum six-speed. Boosted Performance has done all the work on Travis’ past Mustangs, which include a Coyote-swap Fox GT, a 2003 Cobra that made 650-rwhp, and his other current 2014 Mustang GT. “I wouldn’t trust anyone else with my cars,” Travis says of Donnie.

While at Donnie’s place, in went a Tremec T56 Magnum with a McLeod clutch and an MGW shifter. The car previously had a Tremec 3550 with a 26-spline input shaft. A new Fox-width 8.8 also went in the car, and the car’s Baer brakes were painted to match the car’s new True Forged Victory 18-inch wheels.

With these drivetrain upgrades done, the car has an appointment with Fox Mustang Restoration for an interior overhaul. We’ll have another update once that round of upgrades is complete.

Boosted Performance also added a Fox-length 8.8 so Travis could run an 18x10 True Forged wheel out back. The new rear features a Cobra differential, 3.73 gears, and 31-spline axles. For those measuring from home, that is a Nitto 305/35 drag radial.