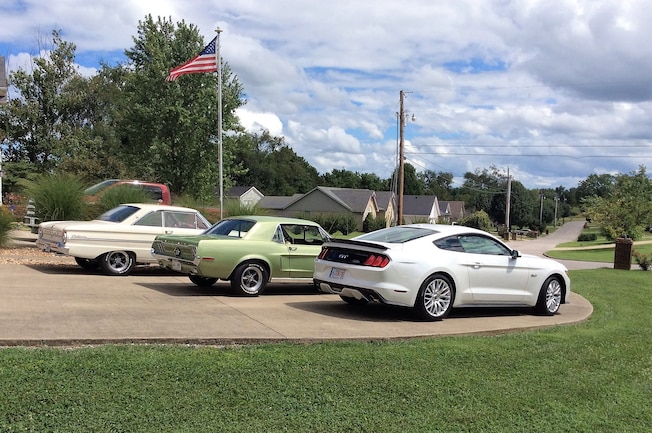 Scott Quillen and his wife are quite the Ford family with a 1963 Falcon Sprint two-door hardtop, the wife’s 1968 Mustang coupe, and, a 2017 Performance Pack Mustang GT. Quillen wanted a Sprint ever since his father purchased one for his brother Rick back in 1969-1970 for $200. Fast-forward to July 2015 and he found one in Virginia; he arranged a meeting with the owner and fell in love at first sight. He eventually added, upgraded, and replaced plenty of parts and brought this beautiful Falcon Sprint back to life. When Quillen’s USAF career was winding down, he found a 1968 Mustang. Not familiar with the common issue of rust in early cars, he looked it over after dark with a flashlight and struck a deal. Once he saw it in the light, he was sick to his stomach. This car needed it all. Living close to Maryland Mustang, Quillen was put in touch with Richard Smith, who agreed to take on the task of restoring the car so they could present it to their son, soon to be 16, as his first car. Worried about vandalism from other teens, mom and son struck a deal: He would get a newer ride and she could have the vintage Mustang. Since then, it has had the engine rebuilt by her father and brother, upgraded disc brakes, and new wheels. Quillen’s latest, a 2017 Performance Pack GT, came straight off the showroom floor. It was exactly what he wanted after having to give up his Race Red 2015. So far the mods are hood struts and a GT350 rear spoiler.