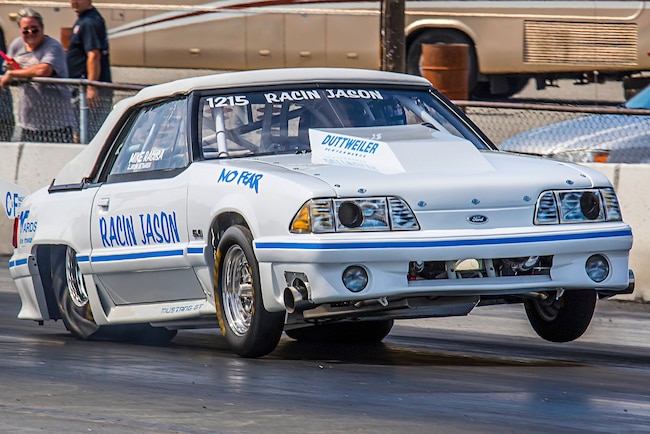 If there was one Mustang that could be used to define a generation of drag racers and street enthusiasts then we would have consider choosing the 1987 Mustang GT that belonged to “Racin’Jason” Betwarda and driven by Mike Ragusa. The duo pushed the boundary of Mustang drag racing and paved the way for turbocharged combinations to dominate dragstrips across the country. A bold statement but it is one that carries truth as these two guys ripped through every record in the 1990s. After breaking the Mustang quarter-mile record several times and going toe-to-toe with any Mustang or Grand National from their home in New York all the way to California, they produced the first Mustang to run in 7s and helped create a drag racing foundation for the turbocharged market—regardless of brand.

The team was a powerhouse and was banned from most Pro 5.0 competitions at the time but it didn’t deter them from building new cars and combinations to chase records and fit the rules of the sandbox wherever they decided to race. Single turbocharged, twin-turbocharged, Pro Street or Super Street 10.5, and even Pro 5.0—Betwarda and Ragusa were on the cutting edge of technology with a constant stream of engines from Duttweiler, awesome rides from C&F Race Cars, and the tuning prowess of Turbo People.

It all came to an end on June 12, 1999 when Betwarda was tragically killed during a high-speed testing accident in his red notchback. The team’s race cars were parked immediately and eventually sold-off. The world-famous Racin’ Jason convertible, having run a best of 7.56 at 188 mph, was sent away, sans motor and transmission, and changed a few hands before going missing. Fast-forward to 2012, the famous convertible was discovered in an Illinois storage unit and Betwarda’s childhood friend, schoolmate, and fellow car enthusiast and Mustang racer Joe Caldwell felt it was time to finish the team’s dream of going sixes with the famous ride. He tracked down the company that was selling the car off to pay the outstanding bill and Caldwell scooped it up moments after it was listed for sale.

The 1988 Mustang GT convertible began life as a street car that Betwarda purchased new. The modifications came quickly with the 13s on nitrous in the early years, which eventually paved the way to a 10-second combination. A 306ci engine was enhanced with a Turbo Technology single turbo kit and a small squirt of nitrous to help the ‘vert run 10.70s in the early 1990s.
A local New York shop originally began the back-half chassis setup before C&F Race Cars prepared it for severe duty with 8-second times, which eventually turned into 7-second runs. C&F Race Cars once again played a major part in preparing the convertible for its voyage to the 6s.

Four years later and the rebuild hasn’t been easy and it certainly wasn’t cheap with over six figures invested, but Caldwell is hell-bent on finishing what Betwarda started—go in the 6s with one of the most iconic Mustang race cars of all-time. The rebuilt and refurbished Mustang is a nod to its past and a hint of its future. He tapped many of the original collaborators for the modern project and first on the list was Mike Ragusa. The primary driver will once again sit behind the wheel of the famous convertible.

Joe Caldwell had been a lifelong friend of Betwarda as they were classmates in school, lived in the same neighborhood, and raced Mustangs together. Caldwell is no stranger to fast cars with Mustangs and Grand Nationals built by the likes of Turbo People and Briante Motorsports back in the day.
The Racin’ Jason Mustang first ran in the 7s on March 31, 1995 during a Mustang Showdown event at Raceway Park (Englishtown, NJ). After many attempts, Ragusa wrestled the car down track with a 7.81 elapsed time at 185 mph, backing it up later that night with a 7.79 at 182 mph.

The chassis was carted up to C&F Race Cars to get modernized but Caldwell gave them strict instructions to maintain as much originality as possible. Safety standards have changed dramatically over the years so Charlie and Fred Bauer led their team to graft in a SFI 25.3 cage, updated 9-inch housing, sturdier four-link bars, and a new Team Z Motorsports frontend. The noted chassis shop also went through the car front-to-back, replacing and redoing anything that wasn’t ready for a new life in the 6-second zone with speeds exceeding 200 mph. The original wheels were retained to maintain the look and feel of the 1990s but new Goodyear racing rubber replaced the dry-rotted tires. Caldwell also added Exstreme Fab double bead-lock rings for added strength and lock the tires to the wheels.

Coincidently, the engine in the car was actually owned by Betwarda in the late 1990s but sold off before he took delivery of it. The 405ci small-block Ford had been back at Duttweiler’s shop as a trade-in and Caldwell purchased it immediately for the project. The stroked Windsor features all the good stuff like Ford Performance Yates heads, Hogans intake manifold with Accufab 105mm throttle-body, Crower rotating assembly with Diamond pistons, and a couple of Turbonetics Y2K turbochargers. Going all in with 36 psi of boost will yield 2,200hp, which is backed by a Pro Torque EV1 torque converter and ATI Performance Powerglide.

Duttweiler Performance always supplied the powerplants for the Racin’ Jason Mustang, first with an assortment of 306ci powerplants, then with a 336ci stroker that was used to run in the 7s. Today, a Duttweiler 405ci Windsor engine powers the Fox-body Mustang and it was once owned by Betwarda but sold off before he took delivery. Caldwell, by chance, ended up with the engine after it came back to Duttweiler’s shop.

C&F Race Cars installed the engine and built the turbo headers, mounted the Chiseled 4000hp intercooler in the passenger seat, and plumbed the car. Racewires’ Troy Baum wired it all and Frank Soldridge performed the baseline tune in the Big Stuff 3. Once the car was fired up and run on the dyno it was time to make it look the part of a legend and bring back the notorious and famous white paint and graphics package. Caldwell worked with Kemperle Auto Body Supplies to get the right raw materials for Vincent Auto Body to bring the Fox-body back to visual prominence. The “Racin’Jason” graphics and original sponsor stickers were recreated by Greg Rigos of Kaos Designs and carefully placed to represent its historic appearance. Rigos was the original vinyl mayhem creator who lettered the Mustang in the 1990s.

The convertible has had a single on-track session, more to shake out any new car bugs than anything else. The initial outing saw them make only a couple of short runs, which never went past the eighth-mile marker, nor was the throttle held wide-open for any significant length of time. After a trip to Cecil County Dragway, Caldwell saw the need for a few tweaks in the package in order for Ragusa to drive the Mustang into the 6-second zone and 200 mph speeds. The team has addressed some spooling issues and Brian Friedentag is refining the ECU calibration to manage the power better so they can get the car lined out to achieve Betwarda’s original goals for it.

The Racin’ Jason Mustang wasn’t built for a class, it is a tribute to celebrate a life of a Mustang drag racing pioneer and fulfill his dream. For Caldwell, the 2017 Racin’ Jason schedule is a mix of car shows and track outings—no pressure of organized competition, just a goal that he is confident they will achieve with ease. 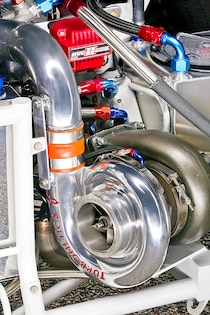 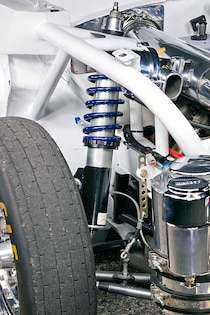