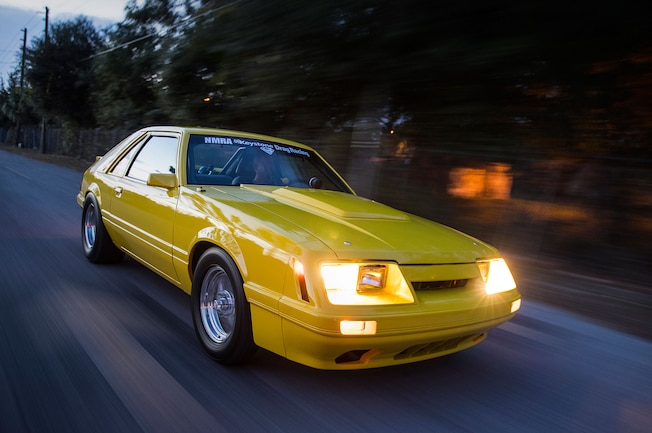 As a field service engineer, Adam Kuffel solves problem with the latest Ford vehicles. His tasks range from customer service to digging into the most complex diagnostics of today’s vehicle systems. While keeping Ford owners up and running is his job, performance and speed are his passion. Perhaps that’s why his weekend mount is a 1,000hp, nitrous-gulping 1985 GT.

The project began in 1993 when Kuffel purchased the 1985 Ford Mustang GT to serve as a winter beater for commuting to Southern Illinois University. The well-worn Medium Charcoal GT had 140,000 miles on the clock, but that didn’t stop Kuffel from adding basic mods and racing it every weekend.

The only way Adam Kuffel gets around with his Mustang is to drive it. He is a field service engineer at Ford and does not own a trailer, so he worked hard to maintain streetability in his 1,000hp Fox-body.

As you can imagine, the high-mileage GT was looking drab, so Kuffel sanded the Ford and painted it yellow in his mother’s driveway. “Amazingly, the car came out great,” he says. “At the time it had underdrive pulleys and 3.73 gears, and it ran 14.0 on street radials. In 1995, I pulled the engine for the first time. It had 185,000 miles and was running great, but I wanted more power.”

Step Up Performance in Roselle, Illinois, helped Kuffel rebuild the 302, which was fitted with a Ford Performance “B” cam and topped with World Products Windsor Sr. heads. “It was a respectable daily driver that ran high 12s,” says Kuffel.

After graduation, Kuffel took a job with Chevrolet Technical Assistance in Detroit, where he was regularly jabbed for showing up with the yellow Ford Mustang. “I used to get picked on every day, but I got even with those Camaro and Corvette owners,” he says with a laugh. After beating those GM guys, his coworkers could read his vanity plate, which to this day reads “GM NTMAR.”

By 1998, Kuffel’s career took him to the Blue Oval, where he started working on the Ford Technical Hotline. Along with the fresh job, he knew the GT also needed a refresh. The Fox-body had endured multiple harsh winters and had accumulated 240,000 miles on Midwestern roads.

Kuffel stripped the body and replaced the doors and hatch with pieces from a 1993 Mustang GT. “I also spent countless hours welding and grinding the engine compartment to fill all the holes. After finishing the driver’s side I wished I’d never started,” he jokes. “It looks great now, but it was a lot of work.”

The entire 1985 GT was treated to a slathering of DuPont Yellow with base/clear including the bumper moldings, headlight buckets, and window trim.

The project was moving slowly, and not having a Mustang to drive was hard to take. Kuffel eased the pain by picking up a 1987 5.0 Notchback. He says, “The Notch was lots of fun, but the problem was that I quickly lost interest in the ’85. It was in pieces, and I think half the ’85 was in my basement. I robbed parts from the ’85 and drove the Notch for a few years, but I knew I had finish my original project.”

Kuffel sold the 1987 Notchback in 2001 and got back to grinding and welding. Finally he installed an S&W rollcage and painted the GT Dupont Yellow. The Mustang was together running for the summer on 2002 but with a Lentech AOD replacing the factory five-speed. “The AOD was great, but it wasn’t as much fun as the stick,” Kuffel says.

Later in 2002, he was promoted and transferred to Orlando, where he’d take on the role of Field Service Engineer for Ford Motor Company.

Longing for gear jamming action, Kuffel swapped a 2.95-low gear T5 back into the Fox, which he says held up to hundreds of passes in the low 12s. But he wanted even more power, so he built a 347ci stroker based around a Ford Performance Boss 302 block. Kuffel used an Eagle rotating assembly with a custom Comp Cams solid-roller camshaft stuck under World heads, which produced 10-second runs. He also went back to the Lentech AOD and tested various cylinder head combinations.

One of Kuffel’s first mods was smoothing the engine bay that houses the 362ci stroker. While kept simple, the installation is thought out and superclean. Kuffel modified a factory GT air cleaner to provide extra area over the carburetor, yet it is fed from the snorkels that connect to the inner fenders.

“I tried several heads, including AFR 205s, which I finally stuck with. And every time I went up in carburetor size the car picked up. In 2009 I tried nitrous, and I ended up with a Wilson Pro-Flow 2-stage nitrous plate. I had it tuned by Steve Johnson at Induction Solutions. We started slow with a 150 shot, and the car ran high 9s.”

Kuffel spent the next few years dialing in the nitrous and the suspension. Traction has never been an issue; in fact, he has worked hard to prevent giant wheelies. The underpinnings consist of a Racecraft 4130 race K-member and A-arms with travel limiters, Strange Engineering double-adjustable coilover struts, 14-inch Hypercoil springs, a Flaming River rack, and Aerospace Components brakes.

The rear consists of a TRZ-braced 8.8 with 9-inch housing ends, a Strange spool with 3.90 gears, an LPW cover, and Strange 35-spline Pro Race axles. The rear is attached with TRZ upper and lower links, along with Strange double-adjustable shocks and a TRZ antiroll bar. And like the front, the rear wears Aerospace brakes.

Kuffel personalized the look of his GT with 1985 SVO sail panels, 1979 Capri taillights, and shaved emblems. He massaged the wheelwells to clear the Mickey Thompson 275/60-15 drag radials. The look is completed with Holeshot Sunflare wheels sized in 3.5-inch and 15x10.

With no trailer, Kuffel continues to drive the Mustang from place to place. Stock seats have been recovered to look like they did in 1985, and he added Auto Meter and Innovate Motorsport gauges to keep an eye on the vitals. He uses a RCI five-point harness to keep him connected, and he added a Moroso battery box to the hatch. The hatch is also where you will find the supply of juice. More recently, he swapped in an FTI two-speed automatic with a Gear Vendors overdrive and a B&M shifter.

Kuffel’s office retains the stock look, but it has the goods to make it legal for the track. Of note are the factory seats and Ford steering wheel.

Safe and secure, Kuffel qualified eighth at a Florida No Prep race, going mid-8s, when he hooked his Stang so hard it did a 350-foot power wheelie and somehow didn’t wreck the back bumper or the front suspension upon landing. Unfortunately he melted a piston on the next run, which led to the engine getting torn down and fixed. It was bored to 4.120 inches, so it is now 362 ci. Central Florida Machine and Speed handled the machine work. Kuffel assembled the motor, which sports 11.5:1 compression JE pistons, a Bullet Racing solid roller cam with 0.690/0.672 lift and 258/272 degrees duration, AFR 205 heads, and a Milodon oil pan. Kuffel modified a stock air cleaner to feed the BLP Racing Products Billet 4150 carb and Edelbrock Super Victor intake. MSD ignition lights the fire. Exhaust flow is handled by Kooks headers and a Pypes 3-inch exhaust with Dynomax mufflers.

Over 400 hp of added punch comes from an Induction Solutions Sledge Hammer single-stage wet nitrous system fed to a plate by a Nitrous Outlet 15-pound bottle. The result is roughly 1,000 hp! The engine also uses an Aerospace vacuum pump, and a 150-amp Powermaster alternator and X5 starter.

Those consistent mid-8s led to a win at the 2015 NMRA Spring Break Shootout. The evolution of this GT has produced a comfortable, efficient, reliable street/strip pony that Kuffel uses for cruising and True Street racing. It has a best of 8.40 at 159 mph, but he’s looking to dip in the low 8s with a little more tuning.

“I now have the best of both worlds,” Kuffel tells us. “With the current setup I can run 8s at the track and I have the overdrive for the street. It’s the prefect car for highway cruising, car shows or local races.” 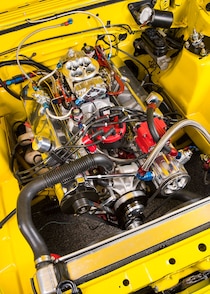 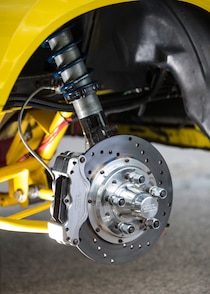 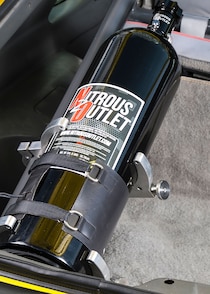 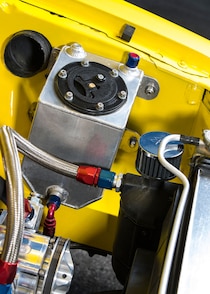 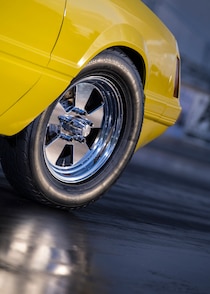 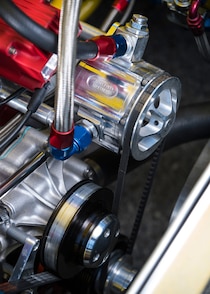 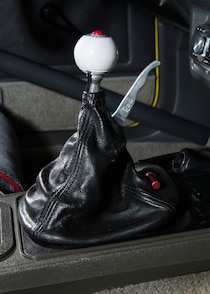