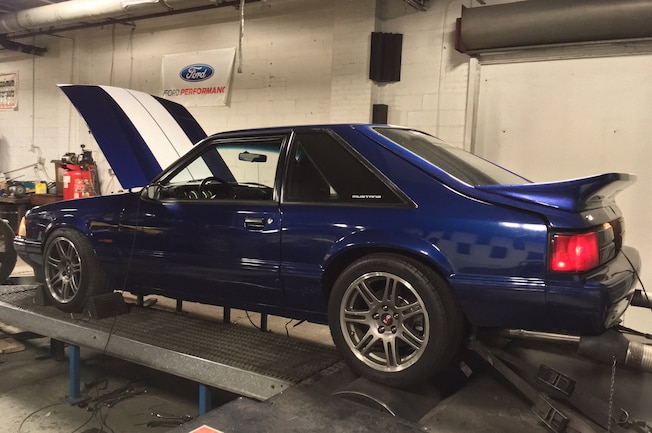 Coyote swaps are still the hot ticket. When the 2011 Mustang GT debuted, and brought the Coyote engine with it, it didn’t take folks long to drop them into earlier Mustangs. Realizing the potential power-to-weight ratio with a Coyote engine in a Fox or SN95 car, we scrambled to get one under the hood of our favorite Mustang, and there’s no sign of that swap slowing down.

Case in point is Lance White's 1988 LX hatch. This author has known the car for quite some time, only back then, Matt Balazs owned the car with a 393ci combination under the hood and then later the 2001 Cobra engine. The car eventually ended up in CJ Pony Parts’ Bill Tumas’ hands before the car changed hands a couple more times.

Whenever you pop the hood of a Fox or SN95 and a Coyote engine is staring back at you, it is cause for celebration. For power brakes and power steering, Lance White's Coyote-swap LX hatch features a Hydroboost system, along with a Ford Performance power steering bracket on the passenger side of the engine. To bring all 422 horses to a stop, the car has Cobra brakes at all four corners.

Lance White actually found the car for sale on Craigslist, and remembered it from several Superstallions of the Net events at Cecil County. The seller was in a pinch, so White made the car his own, and under his tutelage the car’s evolution continues.

White's LX takes on a more serious attitude when in track/street-racing form. He has a variety of Mickey Thompson rear tires to choose from his Ultra Street ride, along with 17x4 RaceStar DarkStar wheels up front.