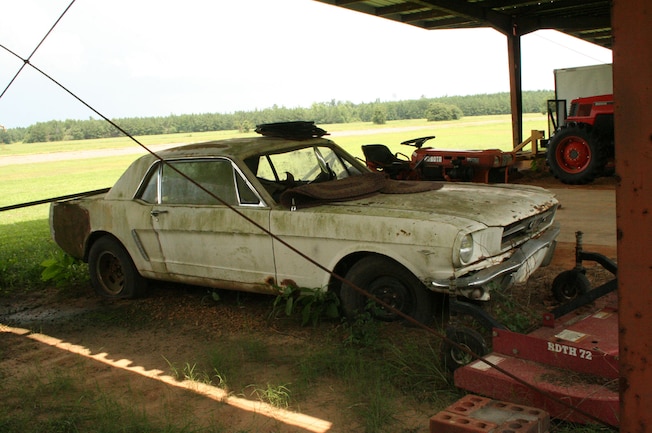 “You were an integral part in the discovery of this car,” Tim Chesney said, as he kicked back in a lawn chair looking at a 1964 1/2 Mustang Indy pace car. Tim shook my hand enthusiastically and proudly displayed the results of his labor at the MCA’s 40th Anniversary show in Indianapolis, Indiana, in September 2016. This car looked entirely different from five years earlier.

Tim had emailed us pictures for a “Rare Finds” story during summer 2011, so we were surprised to see the pace car completed and looking like a concours show winner at the Indy show five years later. Tim walked around the lettered hardtop to point out special features—some 1964 1/2 details and others specific to his pace car build.

Later, we looked up the “as found” photos and the old “Rare Finds” story, which appeared in Mustang Monthly’s February 2012 issue. In 2011, Tim and his son AJ were building Mustangs on the side in their business called TAJ Motorsports [(601) 616-5510; tim@tajmotorsports.com]. Tim’s full-time job at that time had been as the Lauderdale County Network Administrator. There, a lady had told him about a Mustang hardtop parked in a sleepy old airport hangar (with grass runways) on the outskirts of town near Meridian, Mississippi.

“I looked at the car two or three times, and it was just another 1964 1/2 coupe, as far as I was concerned,” Tim says. However, he did write down the VIN and the codes off the original door data plate. Chesney was more into building hot Mustangs than alphanumeric decoding. “If you’ll remember that’s when I called you, Jerry, because I couldn’t figure out what the paint code ‘C’ was.”

It turns out paint code C was Ford’s 1964 1/2 Mustang code for Pace Car White, which got Tim fired up. What had he found, exactly? Perhaps a car that had paced the Indy 500? That night, he began researching Mustang history. He discovered that Ford had built three pace cars to pace the 1964 Indianapolis 500 race, but they were all convertibles.

Tim snapped this photo of the hardtop as found in a rural airport hangar.
The restored pace car is a striking contrast to the unrestored Mustang. Pace Car White is brighter than Wimbledon White. Tim learned during his research that paint code-C indicated a ’50s model truck color Ford called Milk White.
Here’s a rear view of the car, as discovered. The owner had no idea of its pace car heritage.

Instead, his 1964 1/2 hardtop fits into the third group known as the “replica” series. Ford built these replica pace cars with a special formula: Pace Car White (C-code), a white with blue appointments interior (trim code 42), and a 260ci two-barrel V-8 (F-code) backed by a Cruise-O-Matic automatic transmission. Ford produced about 180 of these cars consecutively in April of 1964 at Dearborn Assembly in Dearborn, Michigan.

Tim went with single-stage acrylic enamel to replicate the factory orange-peel look.
The original 260 was still in the car when found.
Pace cars did not come with an air cleaner lid decal. Tim found a double-groove crank pulley, an old A/C condenser, a fender-mounted power-steering reservoir, and factory holes stamped in the firewall—all signs of air conditioning. Current thinking, however, is pace cars did not come with A/C.

Ford had built these Indy Pace Car replicas for their “Checkered” and “Green Flag” sales contests. Ford dealers competed, not individuals. The dealers with the best sales increases would get free pace cars. In the end, Ford gave away 105 pace cars. Dealers picked up their cars in Dearborn where Lee Iacocca, president of Ford, presented each dealer with the keys to their new Mustang. Ford shipped the balance of the 180 pace cars to dealers and offered a $500 discount. Due to inconsistencies in the contests, Ford had to build about 10 more pace cars for dealers than originally planned, making for a total of about 190.

Convinced this 1964 1/2 Mustang was one of the sale’s incentive pace cars, Tim contacted one of his clients, Jimmy Alexander, also of Meridian. Jimmy likes hardtops, and when he heard about the pace car, he had to buy it. Tim and Jimmy realized this car’s value lies in a correct restoration, so that’s what they did. Luckily, though in poor condition, the old hardtop still had many of the original features. That helped TAJ Motorsports complete a correct restoration, as Tim showed me that day in a very appropriate setting—the Indianapolis Motor Speedway infield in front of the famed pagoda tower.

Luckily, the original seats were still in the car. Tim noticed the passenger side seat was not adjustable, a 1964 1/2-only feature.
White with blue appointments really makes these pace cars beautiful inside.
The original pace-car lettering and stripes were long gone by the time Tim found this car.
The blue stripe on the bright white paint really makes this 1964 1/2 Mustang pace car stand out.
The floorpan was rusted and needed to be replaced.
Tim replicated the factory spot welds when he installed the new floorpan.
The original door data plate was still on the car, and the C-code paint gives away its pace car heritage. The build date is stamped “17D” for April 17, 1964, introduction day for the Mustang. Tim found the sheet metal parts on this Mustang were stamped in February and March of 1964. He rounded up parts date-coded correctly for the car’s assembly.
Tim saved the original door data plate for safekeeping and installed this reproduction.
Tim very gently soda blasted the radiator support, looking for pace-car clues and was delighted to find these grease pencil markings on there.
Tim reproduced the grease pencil markings on the radiator support. We do not know what “D868” means. However, “C” is the paint code, “42” is the trim, and “PACE - CAR” reveals in the early stages of production that this Mustang was designated a pace car.
This pace car came with its original hood, which was a 1965-style with the sharp edge bent back on the underside of the leading edge. Other 1964 1/2 models built this early in the model year came with the so-called “unimproved” hood with a sharp edge. Perhaps pace cars got special attention?
To get a proper fit on cars with improved edges to the underside of the hood, Ford had to install headlight buckets with a bevel, another feature on this pace car.
Tim trailered the 1964 1/2 pace car to MCA’s 40th Anniversary Show in Indianapolis in September of 2016. Today, he builds Mustangs full time.
These fender badges display the engine size.
The hardtop is loaded with 19641/2 features, such as the lack of a retaining wire on the rear gas cap.
The 19641/2 automatic shifter handle is much smaller than the 1965 models, as well.
Tim delighted enthusiasts when he showed the unrestored pace car in March 2012 in Pensacola, Florida.
This 19641/2 came with color-keyed door-lock buttons.