An MPR-built, RGR-headed Three-Valve with twins is under the hood 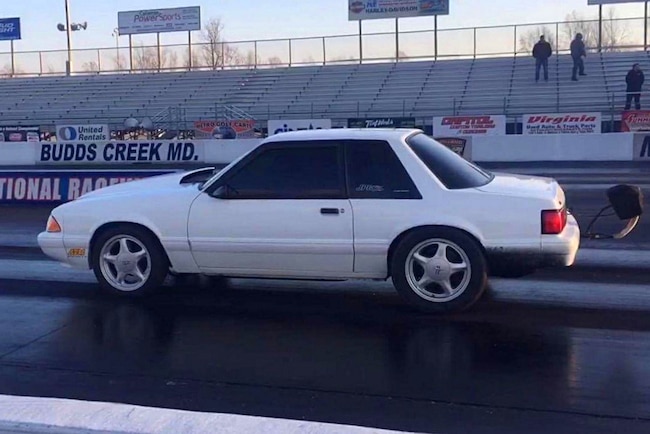 In this day of Coyote-swap everything, one person bucking that trend, and making it work is JPC Racing’s Kevin MacDonald. His former 4-cylinder coupe now has a MPR-built Three-Valve with RGR/JPC Racing heads, Crower cams, a JPC Racing intake, Precision 62mm turbochargers, an air-to-air intercooler, and ID1700 injectors gulping E98. Kevin is JPC’s in-house tuner, and he uses an AEM Infinity engine management system with the company’s AQ1 data logger.

To finagle an MPR-built Three-Valve modular into his former 4-cylinder coupe, JPC’s Kevin MacDonald used a Racecraft tubular K-member and front control arms. With Menscer struts up front, the only thing left to add are travel limiters, but Kevin says, “The heavy front wheels are helping to keep it on the ground for now.” Demon Fabrications fabricated the turbo tubing when Kevin lived in South Florida, along with the cage. However, with the car’s recent performance, the cage may need a trip south for an update.

Behind the Three-Valve is an FB Performance 4R70W transmission with a PTC converter, with an 8.8 out back. Responsible for the 1.23 sixty-foot time is a team effort between Racecraft upper control arms and anti-roll bar, TRZ lower control arms, TeamZ lower control arm relocation brackets, and Menscer shocks.

So, we’re sure you read the title of Kevin’s write-up, but perhaps you wouldn’t believe this little Three-Valve coupe runs in the 7s. Well, it does, and it does so wearing Pony R wheels. Up front are 17x6 1/2s, while out back are 17x10 examples wrapped in 305/45 Mickey Thompson ET Street Rs.

In order to fit a pair of 17x10 Pony Rs out back, Kevin narrowed the 8.8 rear and added DMC Racing mini-tubs. “That was a project,” Kevin says. The narrowed 8.8 rear features Strange Engineering brakes, 35-spline axles, and a spool.

Recently, he took the day off from JPC, for which Kevin thanks Justin Burcham, and he headed for Maryland International Raceway (MIR) to get in a couple runs. He ran an oh-so-close 8.03 at 174.26 mph, but then he was finally able to hit the magic number with a 7.97 at 174.17 mph.

Sevens on Pony R wheels, and with a Three-Valve…That’s doing work, son.