Robert Miller is at it again with this Terminator-Swap Coupe 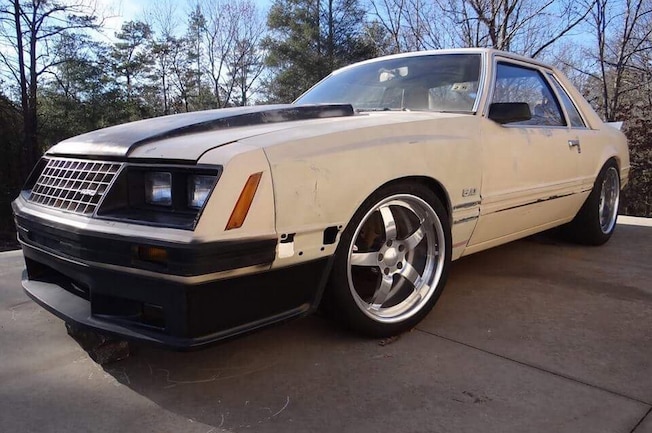 Robert Miller is one of those guys known for outstanding Mustang builds. More than one has graced the pages of your favorite Mustang magazines. His specialty is redoing Fox Mustangs with modern rubber, and many times, modular engine swaps. His new project is combining these two Mustangs; a 1981 coupe, and a 2002 GT.

The 1981 coupe is a car he recently picked up with the intentions of redoing, anyway. However, he was unsure of what direction to go, until he came across the 2002 GT. The New Edge had already been treated to a Terminator swap, so he hatched a plan to combine the best features of both cars into one wicked combination. Brian Hansbury originally built the 2002 GT as a tribute to his grandfather, who served in the 82nd Airborne Division. He performed the Terminator swap, complete with the six-speed transmission, Kooks long-tube headers, complete Maximum Motorsports suspension, the usual pulley mods, and 3.73 gears. Robert acknowledges, “The car is fun to drive,” as he puts it, but alas, everything from the 2002 is going into the 1981 coupe. “I swore I would never do another Mod Fox,” Robert says, “But going this route I can’t mess it up.”

The next time you see this Terminator engine, it’ll be under the Pace Car hood of the 1981 coupe. Robert has another hydraboost set-up for the car, along with many other parts that will make for a seamless engine swap without totally making a mess of the green car.

Robert plans to make the complete swap, including the engine, transmission, dash and cluster, and all the wiring. “I’ll just have to wire in the Four-Eye headlights and the 1979 taillights,” Robert says. The coupe will have an American Iron/Formula Drift look to it when it’s finished, with a Xenon front end, Capri fenders and quarters, and American Iron-look rear spoiler. “That’s really the theme I want for the car,” Robert adds.

Before taking apart the New Edge, Robert used the car in a Christmas parade with his active-duty military brother-in-law. Kids loved it, and Robert even says an older gentleman stood up when the car rolled by, almost as a salute to what the car represents. “I think the car served its tour of duty, if you will. Now it’s time to make the coupe great,” Robert says.

All is not lost with the New Edge car. The plan is to return the New Edge back to stock, and let someone else enjoy it. Robert’s son has laid claim to it, but he’s only 12 at the moment, so Robert’s not sure how long that infatuation will last. If any of Robert’s past builds are any indication, the younger Miller will probably want the ’81 when Robert is finished.

Watch as we add up our GT500-powered Fox's interior gear. Click here for more details or check out the June issue of 5.0 Mustang & Super Fords Magazine