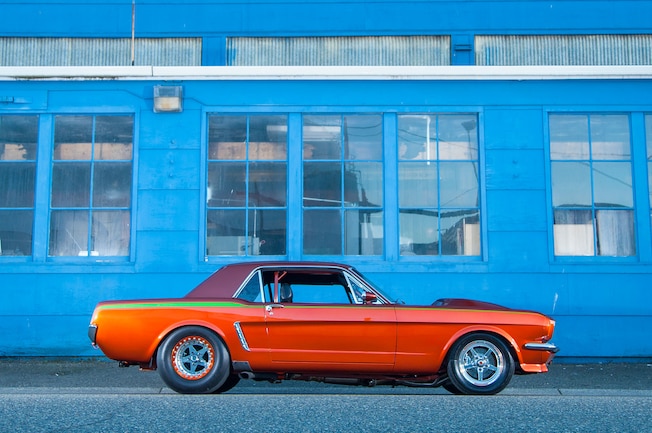 But this isn’t this car’s second time in a magazine. It’s not even its third: Gary Munsch has gotten his 1964 1/2 Mustang in no less than four magazines, three of them national, and on the cover of one. That’s a near-unprecedented number for a hobbyist, and it only gets better. Nearly 35 years separate this current appearance from its print debut, an accomplishment in itself.

The story began 42 years ago when Gary’s dad, Ed, asked about a derelict hardtop in a carport. “The original owner said her husband had passed, and she couldn’t drive it because it had a four-speed,” he says. “Because it was an old car, she would sell it for $250.”

Though the Mustang’s transmission had one more gear than the V-8 powered Fairlane Gary had driven for the prior six months, it was the wrong kind: a Dagenham, the one that went between the small six and the spindly 7 1/4-inch corporate rear. “My dad said this was a way nicer car, and I should buy it from him,” Gary says. “I drove it for a week, and dad was right, it was a much nicer car.” He drove it with the six through high school until his senior year.

Watching the drags every weekend, it was inevitable that Gary would want to go fast, and Dave Bliss was the guy to make it happen. “Dave was the local small-block Ford go-to guy,” Gary says. Dave chose the parts and did the machine work, and Gary put together a 302. The transition also gave the car a Top Loader and 9-inch axle. Gary took the Mustang to the All High School drags at Pacific Raceways (known as Seattle International Raceway at the time) and ran a 12.82 the first night at the track. “Later, someone pointed to the Mustang and commented, ‘That’s a fast one,’” Gary says. “I liked the way it sounded, so I applied for a license plate that said FAST 1.” Gary worked the car up into the mid-12s, upgrading the car with each component failure. Bear in mind, this was his daily driver.

During 1982, Gary had Tom Casias repaint the Mustang, and Gary and his wife Lori towed the car down to the Car Craft Street Machine Nationals in Sacramento. “During this period, Pro Street was really taking off,” he says. The Mustang got its fair share of exposure in magazines back then, Car Craft, Fabulous Mustangs, a local publication titled Vintage Tin, and probably most significant, Popular Hot Rodding, right on the September 1983cover.

For the next 21 years Gary, Lori, and their two sons, Shaun and Chris, cruised the hardtop regularly, occasionally taking it down the track. A succession of engines made the car faster and faster, ultimately letting it run a best of 11.02. But a lifter failure during 2004 once again changed the car’s course. The Munsch boys laid out a plan. The first task: tear the car completely apart.

Gary and Shaun Munsch extensively modified a stock front apron to create this distinctive steel air dam and scoop.
After searching for an air filter setup that had some visual impact, Gary and Shaun built an airbox in the shape of the teardrop hood bulge. It feeds from a K&N mounted low and ahead of the core support to gather cool intake air.
Gary’s wife Lori had Innovators West mill the car’s name (and vanity plate digits) into a set of rocker covers. They house a set of Scorpion 1.6:1 rockers and stainless Ferrea valves.

Gary, Shaun, and friend Jake Lusk grafted in an Art Morrison ladder-bar clip that mounts a Morrison 9-inch with a 4.11:1 cog on a spool in a Strange nodular case with 35-spline axles. Gary and Shaun installed a Heidts front clip, and Jake tied together the subframes with rectangular tubing. A 10-point rollcage lends the car a greater degree of torsional rigidity. But instead of just laying tubes for convenience sake, Gary and Shaun cut open the dash and package tray to get the down legs closer to the A-pillars and sail panels. With the door bars out, the cage remains largely unobtrusive. The duo extensively modified the front apron to create the spoiler-chin scoop. Gary finished the underside of a Crites fiberglass hood. After working the body straight, Gary shot the car in a combination of PPG’s DBC-series Dark Copper on the top and Orange Crush on the bottom. Separating the two is a strip of Synergy Green. He even painted the Shelby bullet mirrors to minimize the flash.

A pair of Scat Procar seats replaces the original buckets and a LeCarra wheel replaces the spindly plastic one. Gary mounted a combination of a Livorsi GPS speedometer and Auto Meter Pro-Comp Ultra-Lite gauges in the dash, embedding the Monster Tach in a pod in the dash. He also fabricated the overhead console to house the relocated switches, connecting the dots with a 17-circuit Haywire harness.

Next, came the drivetrain. Seattle’s Action Machine prepped a block. He and Arlyn Steiger built it to 418ci with a Scat Performance 4⅛-inch-stroke crank, I-beam connecting rods, and .030-over Jahns pistons. The 60cc chambers in Edelbrock Victor, Jr., heads yield a 10.9:1 static compression. Delta Cams ground a solid-roller with .660-inch lift, and 260-degree duration at .050-inch shuts the intake valve late enough to make the engine pump-gas friendly and produce power at Gary’s target speed range.

After a shop told Gary it’d cost $70 an hour at 40 hours to recreate a closeout panel he had seen, he set about building this one himself. The silver circles started as stainless cups that he found at a kitchen store and cut down, ending up with perforated sheet.
Gary maintains a little bit of that ’60s sports-car vibe with a Shelby-style riveted-rim LeCarra steering wheel. The main rollcage hoop (foreground) is really the only outwardly visible part of the 10-point cage.
Gary replaced the stock gauge insert with a five-dial one from a 1966. That way, he could use universal pieces like the Livorsi GPS speedometer and Auto Meter gauges.

He capped the engine with a Barry Grant 975-cfm Race Demon on a Victor, Jr., manifold. The engine feeds a set of 1⅞-inch headers, but Gary and Shaun built the remainder of the system from 3-inch stainless tubing, MagnaFlow mufflers, and Badlanz electric exhaust cutouts. “This was a big challenge because the exhaust passes through the frame two times on each side,” Gary says. The fuel tank also prevents it from routing over the rear axle. Those pipes pass a piece of very special hardware: a Jeffco planetary-style four-speed transmission. It couples to the engine by a Hyatt Racing Clutches Soft Lock and drives the axle with a steel Drivelines Northwest driveshaft.

By lavishing so much attention on it, Gary Munsch risked turning his 1964 1/2 into a shiny poser. But don’t bet on it. On its first time out, his gussied-up heater clicked off a 10.58-second run at 126.66—on DOT-legal tires and burning the same gas you run in your daily driver. Easy horsepower has made us a little jaded, but at the end of the day, that’s fast.

Are we going to make a habit of featuring cars that have appeared in other magazines? Don’t count on it. But we’re willing to make the odd exception for the right one. And as this car’s story goes, the bar isn’t exactly low.

Rather than mount the tachometer in a generic cup, Gary grafted this pod to the dash. He and Lori then integrated the shapes with the same material that they had used on the trans hump and overhead console.
Gary and Lori used a patterned vinyl on the interior pieces that they had trimmed, such as on the trans tunnel and center console.
Nothing says race more than a planetary-style transmission. They cost bank, but Gary scored when a friend lost interest in his Jeffco (http://jeffcoperformance.com). This one’s a four-speed.
Scat Procar seats offer more support than stock seats and greater comfort and access than racing shells. Their finished covers also eliminate a significant amount of technical upholstery work, which made it possible for him and Lori to trim the cockpit at home.

Gary launching at Pacific Raceways in the very early ’80s, his Mustang rocking a set of slapper bars, Cragar SSTs, and a pair of tiny, very loaded wrinkle-walls.
During 1983, Gary redid the car, shot the graphics, and graduated to a set of lighter Weld Draglite wheels. In this form the car acquired so much attention at the Car Craft Street Machine Nationals in Sacramento in 1983. It’s not clearly visible here, but the plates are the “Fast 1” vanity plates he had gotten after someone’s remark at the car’s first track outing.
The attention Gary’s hardtop got at the show launched a number of car features, including the cover and a feature on the September 1983 Popular Hot Rodding. He ran the car in this form with his wife Lori and sons Shaun and Chris for the following 21 years.