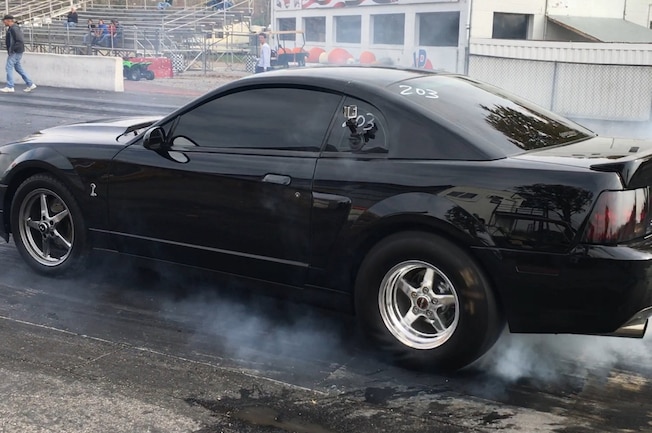 Macomb, Michigan’s Bryan Crane has been a Mustang enthusiast since he was able to drive. “My love for Mustangs began when I saw the infamous ‘Snake Bite’ video back when Kenne Bell came out with the its 2.2L twin-screw supercharger,” Bryan says. That video set the course for owning several Mustangs before the 2003 Cobra you see here.

Bryan purchased his 2003 Cobra out of Pittsburg in August of 2011. With 77,000-miles on the car, it already featured a ported Eaton supercharger with the requisite intake, exhaust, and fuel injector upgrades. Once Alternative Auto’s Lidio Iacobelli went over the tune, the combo was good for 500 horsepower and 503 lb-ft of torque at the wheels.

The Cobra didn’t stay that way for long, though. Over that winter, Bryan made his Kenne Bell dreams come true by adding a 2.2L twin-screw supercharger pullied for 19 pounds of boost. Along with an Alky Control alcohol injection system, the Kenne Bell combo made 632 horsepower at the wheels.

Many underhood components were refinished by QC Coatings, but a testament to Ford, SVT, and the people who built these engines, the Cobra’s engine remains unopened, even after 95,000-miles, and 9-second passes.

After the Kenne Bell came Kooks long-tube headers, a Tremec T56 Magnum with McLeod RXT clutch from D&D Performance, DSS Pro-Series axles, 3.73 gears, and an IRS bushing package upgrade. With all these mods the Cobra was good for a 10.84 at 132 mph.

When Bryan’s Cobra outgrew the Kenne Bell, he added a 2.9L supercharger, but the fuel system was now the weak link, so boost was kept at 18 pounds. Unfortunately, at the end of the 2014 racing season, Bryan’s Cobra experienced dramatic wheel hop, which lead to the death of the IRS. Like most people when that happens, Bryan performed a solid-axle swap, and got after it.

Addressing the Cobra’s fuel delivery needs, Bryan added a Fore Innovations Level 2 return-style fuel system, and he also made the switch to E85 in the process. With an 18-pound upper pulley with a Metco 4lb lower, the Cobra made 743 horsepower and 668 lb-ft of torque at the wheels.

With the addition of SVE big n’ littles, along with Mickey Thompson ET Drag slicks, Bryan was able to sneak into the 9s with a 9.94 at 140 mph.

Bryan’s first 2016 track outing resulted in a personal best 10.26 at 139 mph, but the Cobra’s short times needed help, so he added a Team Z Motorsports anti-roll bar, Lakewood 90/10 struts, and borrowed a pair of Mickey Thompson ET Drag slicks for a last ditch effort at a 9-second time slip at the end of the 2016 race season.

He was able to accomplish that goal on October 29, 2016 with a 9.94 at 140 mph and a 1.43 short-time. “Car was driven to and from the track, and has just under 95,000-miles on the factory unopened long block,” Bryan says. With more practice, and more weight reduction, Bryan hopes to get into the 9.70s, but he couldn’t have made it this far with his friends Brad Bidus, Jeff Chandler, Colin Welch, Ryan Goldin, Tim Brewster, tuner Lidio Iacobelli, Alan Taylor, and Jesse Skiendzior.