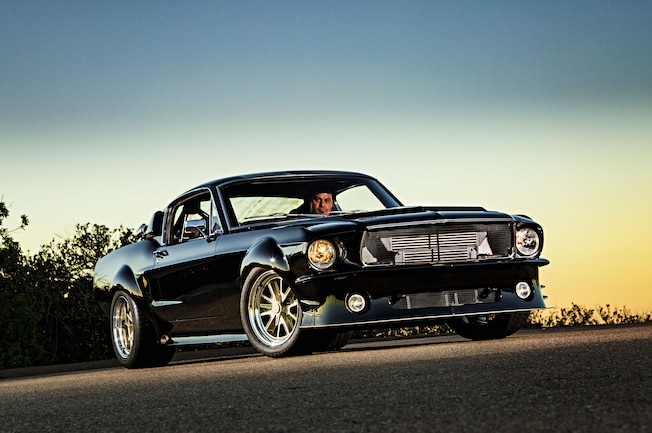 Don’t get us wrong: We love Coyote 5.0s in both vintage and late-model Mustangs. But we admit it seems we’ve shown more than a fair share of Coyote-swapped 1965-1970 Mustangs of late. Brennon Hope’s 1968 G.T. 500 fixes that right quick with a 1,000hp hit of twin-turbo Windsor-style output that we love as much as we thought you might.

Brennon has also owned plenty of Italian and German exotic machinery in his day, but we suspect this fastback bruiser can show those fancy, leather-glove, wine-and-cheese-type cars its sequential taillights with little problem. Those include two Ferraris (one an F355 and the other an F430), a Mercedes CL63 AMG, and a Porsche Panamera. And while those Euro exotics have their place in the overall auto-enthusiast orbit, Brennon confesses to also having a thing for Mustang stuff, specifically for those that exude a focused road-racer vibe.

Brennon went with Australian-built RRS suspension equipment front and rear. This includes Phase-3 coilover front struts, RRS power rack-and-pinion steering, and a rear three-link with coilovers that also has a Watts link and a torque arm. The three-link is augmented with a 9-inch nodular iron housing, an aluminum pinion support, a billet yoke, and a cryogenic-treated and deburred 3.50:1 gear set. Brennon has a webpage for the car featuring several photos of the build process and many other pieces of info. Check it out at 68gt500restomod.com.

“I've always had a strong appreciation for American muscle cars and racing,” Brennon says. “The late ’60s were my favorite and the bodylines of the Mustang and other Ford fastbacks (like Falcon, Fairlane, and Galaxie) have always caught my eye. When the Eleanor Mustang for the 2000 movie starring Nicolas Cage came out, I liked the modern bodywork they had done. I’ve always wanted to design and build my own car, so it seemed like the perfect platform to start with.”

“I’m a big fan of the 1966-1972 Trans-Am racing series and love to drive a car like it’s stolen, so I thought a racecar flare would enhance the build,” Brennon says. “I enjoy driving my cars and not spending my weekends working on them, so mechanically, I wanted everything to be dependable.”

“Technology has come a long way since the ’60s and ’70s, which has not only improved performance, but also has given everyone a more diverse way to build a car,” Brennon says. “This means I could build a car to take to an autocross, road course, dragstrip, standing mile, or open road and have respectable performance at each type of event with reasonable adjustments.”

No overhead cams here. A pushrod dry-sump Windsor does the deed to the tune of 800hp on pump premium, or more than 1,000 with a race-gas tune. Using a Ford Racing block, it has a Scat 4340 forged-steel crank with a 3.75-inch stroke. Carrillo rods in a 6.2-inch length are home to Race Tech 4.10-inch bore, thermal-barrier-coated pistons. The 401-cubic-inch short-block is topped with ported Ford Racing, Yates C3 cylinder heads fitted with Manley valves. Other pieces include a custom-ground Crower hydraulic roller cam and valvetrain, Manton pushrods, and an MSD distributor. On top are a custom-built intake, a billet throttle body, and Bosch fuel injectors. Boost is provided by a pair of Garrett turbos, a wastegate set for 14psi, and a pair of Levels Performance intercoolers. A complete custom 4-inch exhaust system with custom-built ceramic-coated headers is covered by Heatshield Products exhaust wrap. It’s all controlled by an Australian-based Autronic engine-management system. Putting it all down is a Rockland S 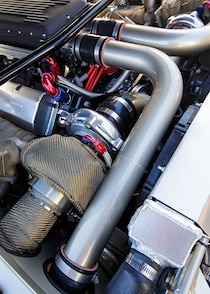 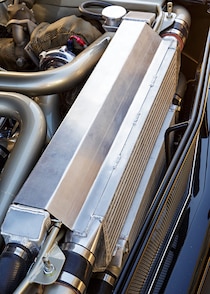 The basic plan in Brennon’s mind for the seven-year build was front and center. “Starting out, I decided on a twin turbo engine for a strong-and-wide power band, a six-speed manual transmission, coilover struts up front, coilover shocks in the rear, rack-and-pinion steering, a three-link rearend with a 9-inch differential and disc brakes all around. I figured all of that modern high-performance equipment wrapped in a vintage body would be an ideal blend of the modern and the classic.”

And boy is it ever. Beginning with a Dynacorn reproduction body shell, Best of Show (BoS) Coachworks added a custom front-air dam with a splitter, canards, foglights, and air ports for front-brake cooling. BoS also incorporated a rear diffuser, functional side-air scoops for rear-brake cooling, and side skirts where the exhaust exits. All of these body mods were done with steel rather than fiberglass. There are also big fender flares to cover the huge 17-inch American Racing Shelby wheels and Michelin Pilot Sport tires. Best of Show also moved the firewall back to allow more engine weight to be behind the front-wheel axis and to accommodate the RRS suspension.

Leather and suede cover the interior surfaces and Corbeau seats. Check out the cool and ever-popular pieces like Sparco seatbelts, Auto Meter gauges, a LeCarra steering wheel, a Flaming River tilt-steering column, and custom door panels. Cleverly mounted behind the passenger seat is the dry-sump tank for the engine’s oil supply. 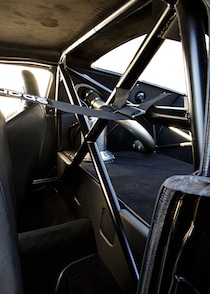 Other additions to the body include a full Trans Am-spec rollcage and rear side vents to cool the rear brakes. “The side scoops serve a purpose, as everything on the car serves a purpose,” Brennon says. “They actually cool the rear brakes, and you can see the plumbing for this through the rear window.”

Besides his love for old-school vintage-Mustang style, we also asked Brennon what he uses the car for. Joking around a bit, he quipped, “It’s for upsetting my wife and the neighbors.” We’d surmise, though, that as long as he doesn’t go too far into boost with the twin-turbo 401 Windsor, his wife Vicki might occasionally ride along for some early-morning rides on mountain roads. Brennon also told us he’d like to use more of the car’s performance envelope in autocross, dragstrip, open-track, standing-mile, and open-road (like the Silver State Classic) settings. So as you can see, Brennon’s fairly radical Shelby-tribute G.T. 500 is a thrill ride to be sure. It’s certainly one we’d be happy to have parked in our garage anytime.

Instead of the usual 18 to 20-inch wheels found on many builds these days, Brennon went with a relatively conservative 17-inch diameter for the American Racing Shelby-style wheels. But the width is quite generous with 17x10s in front and fatso 17x12s in back. The wheels are home to plenty of tread width to make the G.T. 500’s Michelin Pilot Sport tires stick with limpet-like grip. They are P315/35ZR17s in front and P335/35ZR17s out back. The brakes are also RRS-sourced components with VTTR calipers all around; 6-piston in front and 4-piston out back. They put their grip onto 14-inch, two-piece rotors all around. 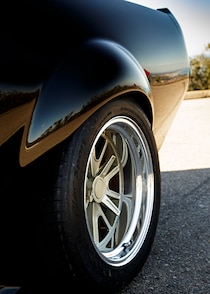 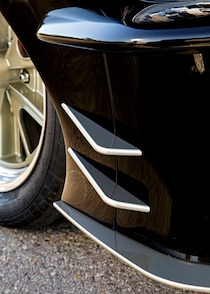 No room in the trunk for any hard suitcases or golf clubs, though a few soft duffle bags might fit in between the ATL 32-gallon fuel cell and the pair of Optima batteries. Other items of note include the fuel-filler neck, an Aeromotive fuel pump, and a Canton/Mecca fuel filter.