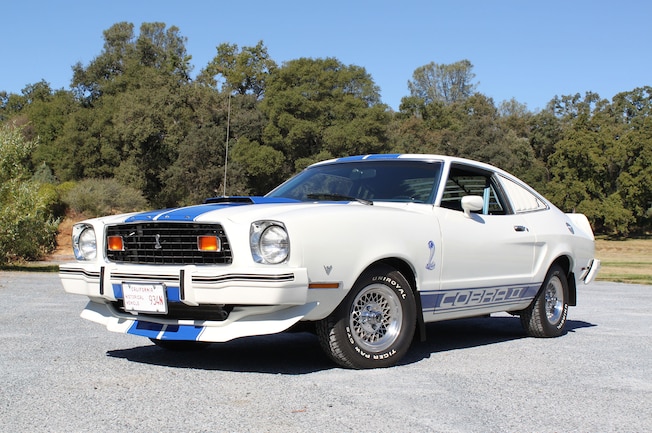 “Once upon a time there were three little girls who went to the Police Academy. And they were each assigned very hazardous duties. But I took them away from all that. And now they work for me. My name is Charlie.”

Most men reading this magazine from their mid-40s on up will remember that intro to a show that introduced them to a hot new sex symbol and a hot new Mustang. Ford Motor Company and Columbia Pictures paired Farrah Fawcett with a white- and blue-striped 1976 Mustang Cobra II on the new television show Charlie’s Angels, in what has to be one of the best product placement bonanzas of all time.

Farrah, who played private investigator Jill Munroe, attracted attention with her flowing blonde hair, pearly-white smile, and shapely body, while the Cobra II caught the eyes of the youth with its 1965 Shelby G.T. 350-like look. On the surface, the Cobra II emulated the G.T. 350 with stripes, front and rear spoilers, hood scoop, and quarter window louvers. But under the hood, things were kept on the mild side, as memories of the 1973 oil crisis were still fresh on the minds of middle-class Americans. Standard was the 2.3-liter four-cylinder engine delivering 88hp. Optional were the 90hp 2.8-liter V-6, and the 302-2V V-8 churning out 139 horsepower.

Originally, the $325 Cobra II option was to be a somewhat limited production model with Ford projecting sales of about 5,000 units. But partly due to the success of Charlie’s Angels, Ford sold five times as many Cobra IIs than they had planned, with 25,259 rolling off the assembly line by year’s end. Not a huge number when compared to all of the Farrah posters featuring her in a red one-piece bathing suit sold during that era, but a very respectable number indeed.

The 1976 Cobra II pictured here is owned by Bobby Aldrich of Placerville, California. It is nearly identical to the car used on the hit TV show with the exception that the star car had its Cobra emblems removed from the side louvers and the Cobra grille emblem was blacked out. Bobby has the first four seasons of the program on DVD. “You can see the car going downhill as the show progressed,” Bobby says. “The front chin spoiler was really beat up.” Eventually, the first car was painted blue and on a later episode wrecked. The replacement Cobra II didn’t have blue interior like the original, first-season car.

Bobby located his Cobra II in the local newspaper in 1991, buying it from a youngster who had lost his license for speeding. After making the purchase during the drive home, Bobby found his new Cobra was losing oil pressure. Once he got it to his garage, he found a broken main bearing cap and five cracked pistons. Bobby was undeterred, as he had purchased it to be a project vehicle. Although there were quite a few Cobra IIs to choose from back in the day, this one was the only one that he had found with a 302.

Bobby decided to put a little more bite in his car by installing a 1968 J-code 302 topped with an Autolite 4100 4V carburetor. Stock cast iron manifolds were used but connected to a dual exhaust system. He also added Kurt Stumpf subframe connectors, which Bobby has high praise for in firming up the hatchback models. “They have a lot more flex than the coupes,” he says. On the inside, he bought an upholstery kit from Mustangs Unlimited and refurbished the optional blue deluxe interior, complete with the one-year only Cobra II nameplates on the door panels.

Though Bobby owns six other Mustang IIs, this one “seems to be the favorite among the general public,” he says. No doubt some of that comes from remembering the pretty blonde female on the small screen exiting the driver’s seat of a Cobra II more than three decades ago. It’s the one Bobby has owned the longest, yet enjoys driving the most. This 1976 Cobra II is Bobby’s Angel.