This 2013 Ford Mustang GT is a Garage Built 1,200 Horsepower Sleeper 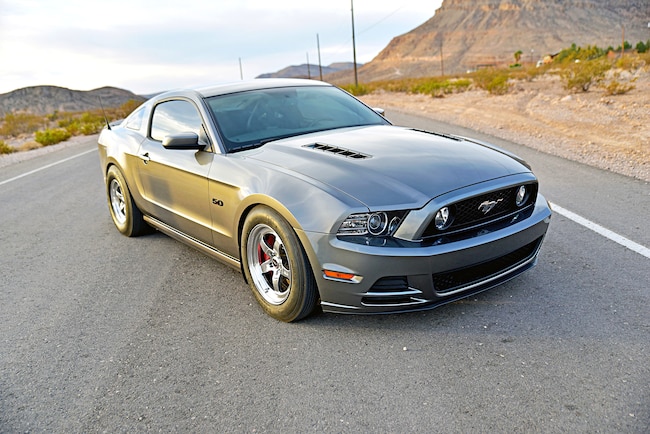 For Tanner Marroquin, building fast Mustangs has become a part of the daily grind for the past 15 years and his current ride, a 2013 Mustang GT premium is no exception. Tanner resides in Las Vegas, Nevada with his wife where he works as a High Performance Specialist at a local ford dealership. Several times a month you may also find him running the street legal program “Midnight Mayhem” at The Strip at Las Vegas Motor Speedway.

At first glance, you may just see an average daily driven Mustang. Daily driven it is, but it’s anything but average. What we like most about Tanner and his ride is that he built and installed all the aftermarket parts in his two-car garage with a small tool box and a set of jack stands.

Under the hood is a familiar and proven 62/66 twin turbo setup from Hellion Power Systems. With plans to make a ton of power, Tanner opted for a Darton sleeved block, including ARP hardware throughout the engine. To feed the fire, Tanner installed a Fore Innovations fuel system that features 3 Walbro 465 LPH pumps and ID1700 injectors. The mustang originally came with a manual transmission, however that was swapped out for a 6R80 automatic with a Exedy Stage 2 clutch kit, billet input shaft, and a Circle D converter. Currently, Tanners ride is set up for E85 and makes around 1,200 horsepower. From the powertrain to the drivetrain, everything on this Mustang has been upgraded, all the while keeping a low profile.

To date, Tanner has been over 140 mph in the quarter-mile with plenty left in it. By the time he’s done, Tanner plans to have an easy 8-second thrill ride that he can still drive to and from the track.