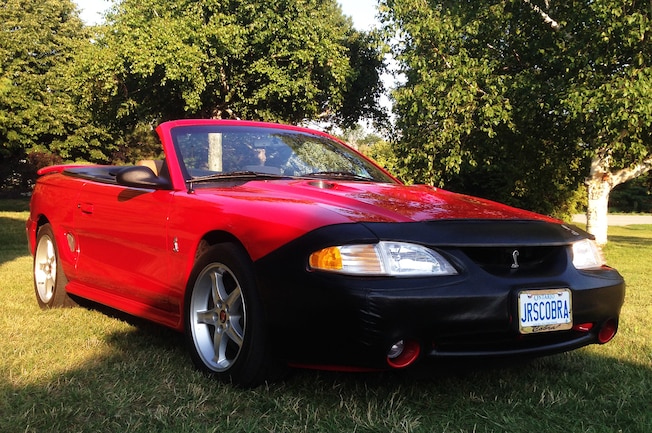 Jon-Ross Todd, 19, from St. George in Ontario, Canada, is the proud owner of this 1997 SVT Cobra. In the two years he’s owned it, it has never seen rain and hasn’t been washed once. Todd tells us that the first owner was a little OCD with the car. It had been wet-sanded right after the car was finished, and was then sent to the owner, an executive at Ford Motor Company. He drove it to Indianapolis to get the suspension work done by Kenny Brown. Realizing that it was going to rain on the way home, he stopped at a garage and asked to park it until it let up. He grabbed a hotel room across the road from Sunday to Thursday while the rain came down. Fast-forward and the second owner then used it as a memorial piece for his son. Eventually he decided it was time to get rid of the car, and it ended up in Jon-Ross’s hands. The mods on the car now include a Bassani cat-back exhaust system with an X-pipe, BBK CAI, and interior and engine dress-up, along with engine work by Sean Hyland.