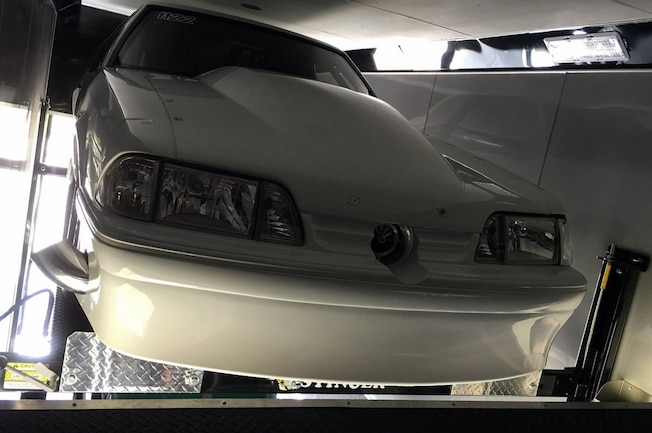 The X275 craze shows no signs of slowing down. With more and more tracks hosting X275 races, or giving it their own twist on the name, 275-tire racing maintains a huge following. The X275 craze is so big, even the NMRA and NMCA have switched up its own Street Outlaw rules to get a piece of the action.

One racer looking to cement his name on the list of top X275 competitors is Jon Thomas, and his 1991 Mustang LX coupe.

The engine in Jon’s coupe is a Bennett Racing 350ci small-block Ford that receives boost from a Garrett single turbo and fuel from a FuelTech system, tuned by Wade Hopkins at Southern Speed Racing. The car uses an MSD grid system for ignition, while getting power from a Go Lithium battery.

Jon follows the same recipe others cook up in X275 by using a single turbo, but specifically, he uses a Garrett GTX 55-85 unit. The powerplant is a Bennett Racing-built 8.2-deck, 350ci small-block Ford with Trick Flow High-Port heads. The transmission in Jon’s car is a TCI Pro-X with a Coan 1.66 gear set, while out back is a Racecraft 9-inch fabricated rearend with 40-spline gun-drilled axles and a 4.56 gear.

For suspension, Racecraft handled that aspect of the car, as well, both front and rear. For dampening, Racecraft added Santhuff struts up front with Southern Speed Racing-spec Afco shocks in the back. Southern Speed in Tupelo, Mississippi built the chassis, and they also tuned the suspension, as well.

Jon put that suspension to the test at RadialFest recently at Hunstville Dragway. In X275, he ran a promising 4.96 in testing, and he qualified seventh. In round 1, Jon ran Dustin Mewbourn in some Fox-on-Fox crime, with Jon coming out the victor with a 4.65 to a 4.71. It was more Fox-on-Fox crime in round 2 when Jon ran up against Shane Fisher’s equally meticulous black coupe. Jon was out quick with a 1.10-short time on the back tire, but because of the wheelie, he had to pedal it, which resulted in a losing 4.62 at 159 mph to Shane’s 4.52 at 160 mph. “It would’ve been good run if not for the wheelie,” Jon says.

If it was any consolation, Jon fell to the eventual winner; and a pedaled 4.62 shows a lot of promise of what the future holds.