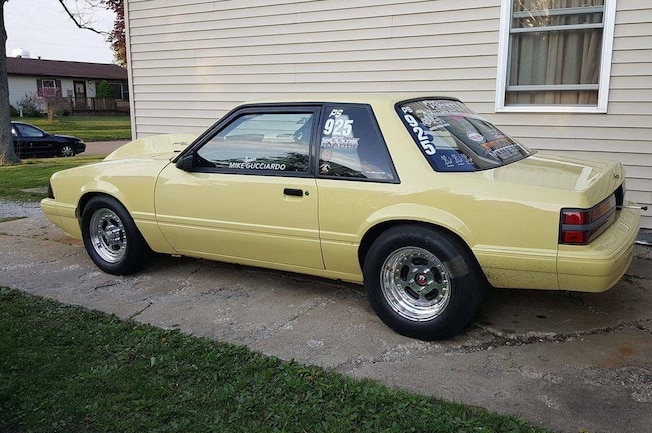 If there’s one thing about NMRA Pure Street racer Mike Gucciardo we like, it’s the fact that he doesn’t give up. He could’ve packed it in when he was diagnosed with cancer as a teenager, but he fought back against the disease, and won. “We are not quitters,” Mike says of himself, his supportive wife Amanda, and his mom and dad.

He applies that same outlook on this 1987 Mustang coupe he brings into NMRA Pure Street competition. Yes, he traded a set of Auto Meter gauges for the car initially, and as such, it needed a lot of work to get it to its current form. The Horsepower Ranch in Hanna, Indiana resuscitated the car’s body, applying the Tropical yellow in the process. “The car was painted yellow to show support to the Livestrong Foundation, being I am a cancer survivor,” Mike says.

Don’t call it beige; that is Tropical yellow, applied by the Horsepower Ranch in Hanna, Indiana. When Mike initially traded for the car, it was a rusted out shell, but it’s looking much better these days.

Pecoz Motorsports built the 8.8 rear for the car, while Fast Forward Race Cars added and dialed-in the coupe’s rear upper and lower control arms, adding Afco double-adjustable shocks, as well. Up front is a Racecraft tubular K-member with Team Z control arms and Strange Engineering struts. Holeshot wheels are wrapped in Mickey Thompson rubber, while Strange brakes bring the action to a halt after each pass.

DT Racecars did the car’s 10-point roll cage in the car, while Butler Fabrication added custom cage gussets, and miscellaneous chassis strengthening bars to further fortify the car’s safety. It looks like Mike was able to hold on to a few Auto Meter gauges in inquiring the car, and over in the corner you can see the car’s MSD Digital 7 box.

A relative newcomer to Pure Street competition, Mike has been intrigued with the class since the beginning. “It’s very interesting to me. It’s a fun class in my eyes. My fellow racers in this class make it what it is,” Mike says. Being new to competition also means Mike has an uphill battle to get the car sorted out. Other, more established racers have their combinations figured out, so Mike and Amanda have their work cut out for them.

It’s a family affair when it comes to funding Mike’s Pure Street program. Mike and Amanda, along with Mike’s parents, fund the effort 100-percent out of their own pockets. “So, 90-percent of the time we have to be creative, think outside the box, and use what we currently have,” Mike says. “Much of what’s on the car was bought secondhand. Parts have been purchased, sold, bartered, traded, borrowed, etc,” he adds.

“We may not have the fastest car in the class,” Mike says, “But that doesn’t stop me from being proud of what we’ve accomplished.”

The Kaley Motor Service-built 311ci combination is fed race fuel via an Aeromotive A1000 fuel pump and a Quick Fuel Technology regulator. Once that fuel is burned, exhaust is routed out through Kooks headers into Dynomax Bullet mufflers.