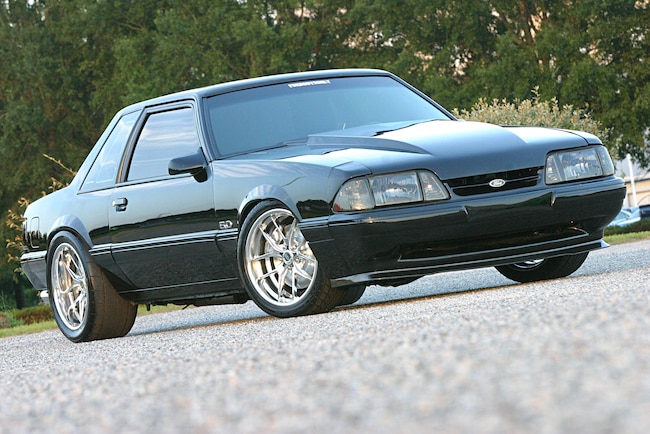 Late-model Mustangs come in all shapes and sizes. From the Fox Mustang’s boxy shape to the latest S550’s swoopy disposition, there’s truly a platform for everyone. And most of the time it is a generation thing. Most guys this author’s age are hardcore Fox guys, and any Mustang 1994 and newer just won’t do. The younger crowd, who weren’t even around when the Fox Mustangs dominated the market, tends to gravitate to the latest S197 and S550 Mustangs.

Thanks to people like Canton, Georgia’s Kody Smith, the Fox Mustang still runs the streets. “I have always had a huge passion for Fox-bodies because of my dad,” he says. “He always owned Foxes, and I knew one day I wanted to own one.”

Tricky Ricky Smith, Kody’s dad, bought a 1993 5.0 off the showroom floor. Kody says his dad was the “baddest dude on the streets where I grew up.”

Seriously, is there anything cooler than a black Fox coupe?! We didn’t think so. Kody’s LX is augmented with CCW DS570 wheels wrapped in Nitto treads. Inside the CCWs is a big brake kit from Our Dream Auto Museum and Restorations’ Manir Karim.

Kody tells us people knocked on their door at 4 a.m. to go street race, and Ricky would only charge them gas money in return for a racing lesson. “He would whoop ’em every time,” Kody says.

Ricky also handed out lessons at the track. “We spent my first birthday at the dragstrip,” Kody says with a laugh.

So you can see why Kody has this love affair with Fox Mustangs. “I have been into Fox-bodies since I was born. It’s in my blood.”

Kody didn’t have to wait long for his first Fox. On his 16th birthday his dad surprised him with his very own. “It was a 1989 LX hatch that was in very rough shape,” Kody says, “but I treated it like a Ferrari.”

As if he weren’t already obsessed, actually owning a Fox Mustang turned that obsession into an addiction.

Kody would eventually move on from the LX to a 1994 GT, a 1987 GT T-Top, and finally the 1988 LX coupe you see here. “It was my daily driver for almost three years,” he tells us. He slowly started modifying the coupe to make it unique, and in 2013 he drove it to Mustang Week, a seven-hour trip.

In 2015 Kody was able get a daily driver, which allowed him to focus on building up his coupe. “I had less than five months to get the car ready for Mustang Week,” Kody says. After many sleepless nights and a ton of help from Ricky, the guys had the coupe ready in time. Kody echoes everyone’s sentiment when he says Mustang Week “was a blast.” Between Mustang Week 2015 and the 2016 version, he was able to go back and finish what he wasn’t able to get to for the 2015 event.

Starting with the outside, the coupe features recent paint applied by Shannon Pittman. Glasslife Atlanta color-sanded the exterior, polishing it to a mirrorlike finish. As if a black Fox coupe weren’t already cool enough, a few of the additions for 2016 include a Maker’s Garage front splitter and CCW DS570 two-piece wheels. The trouble with a Fox Mustang is that you can’t get a sizeable wheel and tire on the front end. Out back you can get a good size combination, though. Working with CCW, Kody was able to get an 18x9 up front and an 18x10 out back. Nitto 555s are at each corner, with the coupe wearing 555R Extreme Drag radials at the rear.

For suspension, the coupe has an aftermarket K-member, control arms, and coilover kit with KYB struts. In the back, the 3.55 gear’d and Moser axle-boasting 8.8 wears adjustable uppers and tubular lower control arms, and KYB shocks. “The car handles really well with the suspension,” Kody says.

Troy Hufstetler Jr. built the coupe’s 306 with a Comp Cams custom roller, Pro Comp aluminum heads, and an Edelbrock Performer intake. The little dynamo puts down 300 rwhp and 315 rear-wheel torque. The coupe’s fuel system is largely stock, but the gas tank (along with other miscellaneous pieces) was hydro-dipped by Jason’s Automotive.

Bucking the current Coyote-swap trend, Kody’s coupe features a good old-fashioned 306 under the hood. Coup Performance did the machine work on the short-block, and then Troy Hufstetler Jr. took it from there. Hufstetler built the engine using a custom Comp Cams roller, Pro Comp aluminum heads, an Edelbrock Performer intake, a BBK Performance 70mm throttle-body, and a Pro-Flow 70mm mass air meter. The coupe’s fuel system is mostly stock, save for 24-lb/hr injectors. Since the coupe is a 1988 model, the underhood harness is from a 1989 mass air model, using an A9L PCM.

For exhaust, Kody’s coupe uses BBK Performance 1 5/8-inch long-tube headers with a Bassani X-pipe. The coupe’s after-cat exhaust is a Secret Sauce mixture of MagnaFlow Magnapack mufflers with Flowmaster tailpipes, both the 3-inch variety. Unlike the secret sauce exhaust, the coupe’s transmission is the tried and true T5 with a Ford Performance clutch and a BBK Performance shifter.

The coupe’s interior also received quite a bit of attention. It features a multitude of parts and pieces from TMI Products. The seats are TMI’s Sport R500s, but that’s not all. The door panels feature suede inserts, and the headliner, sun visors, and shifter boot are also made from suede, and from TMI.

We are sure Kody isn’t done with his coupe because all of us have something we want to add to our Mustang. However, everything Kody has done to the coupe has been done with the goal of getting it into a magazine. His dad passed all his Mustang magazines down to Kody, and that’s when this dream was set in motion. “I knew right then and there I would not stop until I had one of my Fox-bodies in a magazine,” he says. Kody hopes his passion for Fox Mustangs is seen with his own build and that it inspires others to get started on the build of their dreams.