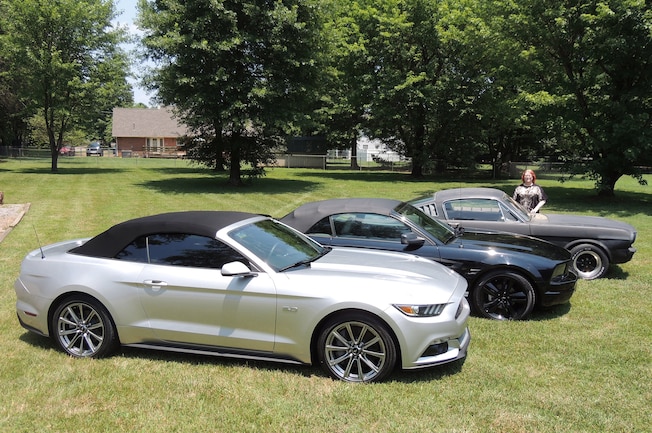 George and Shelia Wallis are Ford people, as if you couldn’t tell. George owns the 1965 Fastback with a 289 four-speed, stock suspension, a stock shifter, and 14-inch Torque Thrust wheels from 1966. The engine has been rebuilt but retains the old “Colt 65” intake manifold along with Hedman headers and Flowmaster exhaust. In the works is a 347 stroker with aluminum heads, a stud girdle, roller rockers, and a cam when time permits. Shelia purchased the 2005 V-6 convertible brand new off of the showroom floor with just 15 miles on the clock. It served daily driving duties, but after the Wallises purchased a new F-150 with the new 5.0, George says he wanted to “turn up the wick.” After a dyno run at 85,000 miles, the car put out 185 rwhp, so they added Fire Wires, a Screaming Demon coil, Ford Racing dual exhaust, a BBK throttle-body with spacer, and an Airaid CAI. After a tune from AmericanMuscle, the car put down 220 rwhp and 245 lb-ft torque. Since cornering is so much fun, they added lowering springs, larger front and rear sway bars, and Tokico shocks and struts, and completed the exterior with 19-inch staggered wheels. Last but not least, the couple’s 2015 GT convertible was also purchased off of the showroom floor from the same dealership. For now, the car serves as a daily driver, so it’s only a matter of time before the modifications begin.