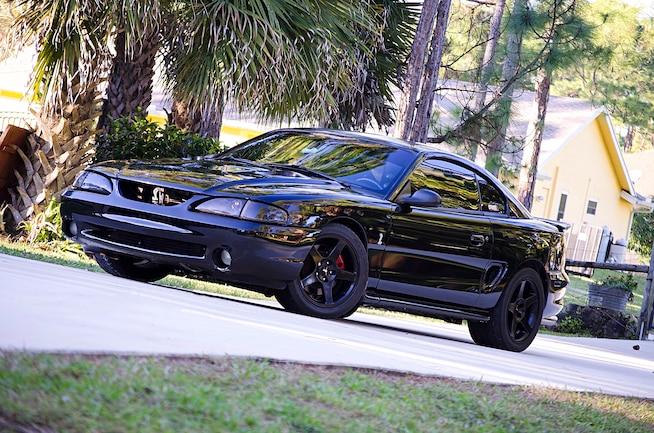 “I first laid eyes on my Cobra when my then-boyfriend Jake first started his business,” Danielle Long says. Her then-boyfriend, now-husband Jake Long owns Power by the Hour (PBH) in Boynton Beach, Florida. PBH specializes in Mustangs. Jake started out with just one bay, and the previous owner was one of Jake’s first customers. “I instantly fell in love with it,” Danielle adds. The Cobra featured a Paxton Novi 2000 supercharger, 3.73 gears, an SLP exhaust, and a fuel system.

Thankfully for Danielle, Jake came home one day and told her the car was for sale. Jake initially bought the Cobra for Danielle, but she was able to sell her then-1994 GT to pay for it.

The Cobra had a few questionable exterior mods, so the first thing Danielle did was return the exterior to stock and go through the engine. This was when the Longs discovered the engine was a stock GT bottom end under the original B-heads. Even so, Danielle wasted little time in planning the car’s rebirth. “It took a few years, but the Precision 61mm turbo was installed, along with a custom turbo kit,” Danielle says. “I did a large majority of the welding, while Jake was the brains behind the routing.”

Right now the engine is basically stock, but Danielle hopes that changes soon. Her plans include adding a larger turbo, an EFI system, and a built bottom-end with ported heads.

Unfortunately a couple key aspects of the combination weren’t happy about the newfound power. The stock T45 and 8.8 both signed off during a track test session. Danielle remedied those issues by adding a 4R70W with a PA manual valve body and trans brake, and Moser 31-spline axles and Shelby GT500 differential. “There was obviously a slight power drop with the conversion,” she says, “but I gained three tenths in the quarter-mile.”

Fast-forward a few more years and two kids. The Cobra hasn’t changed much aside from a TigVision antiroll bar, a short runner intake modification, and a little more boost. With 11 1/2 pounds of boost on tap, the Cobra has run a best of 11.02 at 120 mph. Jake and Danielle haven’t dyno’d the Cobra recently, but their best guess is around 455-460 rwhp through the 4R70W.

Danielle hopes the Cobra goes under the knife soon, with the addition of a bigger turbo, a built bottom end, ported B-heads, and a standalone EFI system. With those changes Danielle says, “It’ll be time to go fast.”