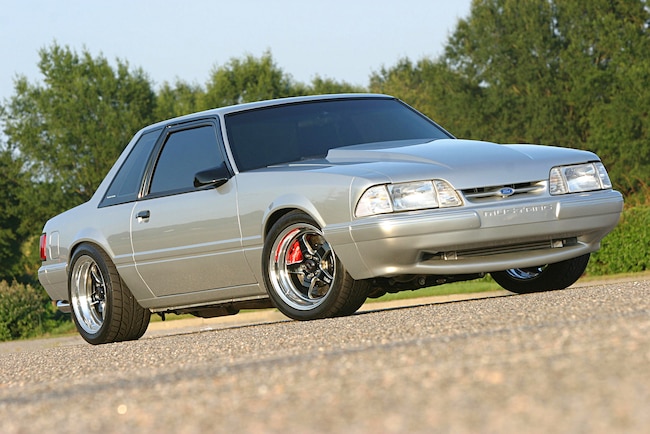 “They don’t make ’em like they used to,” is a common expression about how all the cool cars were made back in the day and new cars take time to become appreciated, if they ever do. While it is true that we all think some cars made back in the day are the coolest ever, compare them to anything made today and they are just old cars.

A silver Fox coupe is hard to beat, but when it is Coyote-swapped, wearing Weld RTS wheels with Nitto NT05 treads, with 638 rwhp—well, that’s next level. Romine Restorations in Summerville, Georgia, performed a rotisserie restoration on the car, replacing pretty much every nut and bolt on the car. The results speak for themselves.

And you know what? We thought they were rockets, but we didn’t know any better. We didn’t have Four-Valve engines, factory power adders, a six-speed transmission, or 435 hp. We thought we were setting the world on fire if we cracked off a 13-second pass. Most of the fast Mustangs ran 12s, and if you ran 11s you were the man. What the new GTs make with a cold air and a tune it would take a supercharger and a top-end swap, cam, and intake combination to make.

Even after all this pontificating, the old saying is true: They don’t make ’em like they used to. But using modern Coyote power, a supercharger, and a six-speed transmission, we can have today’s power with yesterday’s personality. That sounded like a good recipe for Steve Bell and his 1991 LX coupe.

He adds, “The GT was my only car, with a wife and three kids.”

Hard to believe the car originally came with a red interior, huh? During the restoration, a brand -new black interior was added in place of the red, along with an MB Quartz stereo system. The dash cluster is from Florida 5.0 and features Auto Meter gauges to keep Bell aware of what’s going on under the hood.

Needless to say, the wife wasn’t too happy, but Bell was hooked. “I used to load up my three kids, go to the track, put on my slicks, race, then drive home,” he says with a laugh. “I had three baby seats in the back of that car.”

Obviously that 1992 GT hasn’t been Bell’s only Fox. “I have since owned a lot of Foxes, five Terminators, and three Coyotes, but the Foxes are my passion; so when I saw this one for sale I had to have it.”

It doesn’t take a rocket scientist to see why he wanted the coupe. Let’s start with the exterior. The nine coats of PPG silver on a Fox coupe body is just pure goodness. Romine Restorations in Summerville, Georgia, performed a rotisserie restoration on the car to get it back into showroom-fresh condition.

“This car is amazing,” says Bell. “Every nut and bolt is new.”

The car is an original 5.0, and it had just 82,000 miles on it when it was restored. As far as the body goes, the only deviation from stock is the addition of a 2-inch cowl hood. And thanks to the wondrous hue, you probably didn’t notice the lack of side moldings. You’re looking now, aren’t you?

The Coyote engine itself is stock, but with the addition of a ProCharger D-1SC supercharger, and with the accompanying fuel system mods, Steve Bell says the car feels like a low-10, high-9 second car. After dealing with the heat at Mustang Week, Bell is contemplating adding A/C to the car. He doesn’t like the fact that adding A/C to a Coyote-swap car clutters up the engine compartment. He’s looking for alternatives, and we are sure he’ll figure it out. To bring the car to a halt, Bell added Wilwood six-piston brakes up front, while Cobra brakes reside out back.

The body is probably the most original part of the car. The aforementioned 5.0 pushrod engine is long gone; in its place is a 2013 GT Coyote powerplant. As is customary with Coyote swaps, Bell’s LX uses a Ford Performance control pack to make the swap possible in the first place. A lot of other parts and pieces are also needed to complete a Coyote. Bell’s LX utilizes a QA1 k-member with a coilover setup, BBK Performance swap headers and X-pipe, a Tremec T56 Magnum transmission, a Stifflers transmission mount, and a 2004 Cobra driveshaft.

Bell has owned the car for a couple years now and has added a few things. It was naturally aspirated when he bought it, but he changed that with the addition of a ProCharger D-1SC supercharger. With the added horsepower, Bell also had to upgrade the car’s fuel system. He added an Aeromotive Stealth fuel system utilizing an A1000 pump and ID1000 fuel injectors. He wanted the coupe to make at least 650 rwhp, and so the fuel system was a necessary addition to enable the use of E85 to reach that number. With Bob Kurgan tuning the combination, Bell’s coupe 638 hp and 598 lb-ft to the tires.

All the hard work on the car resulted in the car winning the award for Best 1987-1993 Mustang at Mustang Week 2016. The car has also helped Bell realize the goal of being on these pages. “I have loved your magazine for 25 years. I have every issue and would consider it an honor to be in it,” says Bell. He is so dedicated that he has a Muscle Mustangs tattoo on his arm. It’s his only tattoo; he got it at age 23.

Funny thing about Bell is that he used to own a 2015 GT. He owned it about a year, but he just couldn’t do it. He’s a Fox Mustang guy. These cars are his passion. About this coupe, he says, “This car drives like new, handles like it’s on rails, and pulls like a freight train up top.”

Bell thanks Josh Hines, Heath Bell, Matt Bell, and especially his wife Angel, who has stuck with him through all of his Mustang shenanigans. She’s obviously a saint. 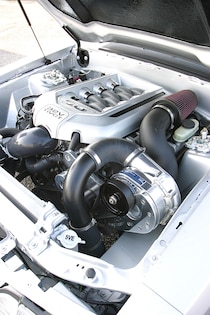 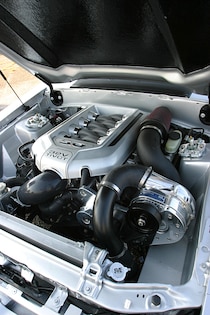 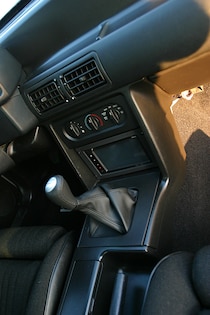