The World’s Most Extreme Eleanor?

Extreme Australian Eleanor: What you get when one man sets out to build the best Mustang in Australia 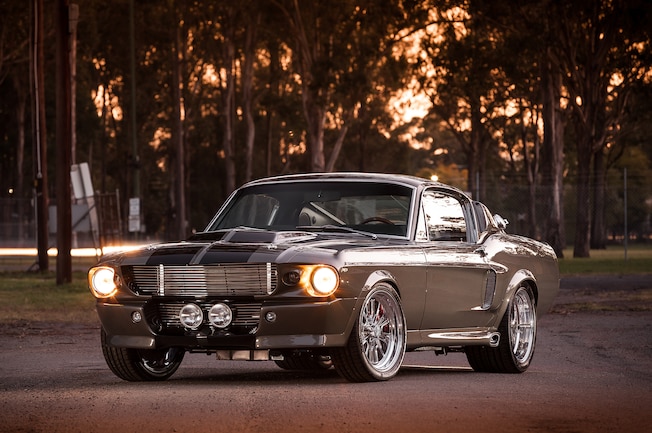 Ed note: Mustangs and other American cars are a big deal all over the world, but nowhere more so than Down Under (Australia), and to a lesser extent, New Zealand. Every now and again, we’ll get a fantastic car feature from our Australian contributor Ben Hosking. Hosking brought us the Family Heirloom fastback that graced the January 2016 cover of Mustang Monthly, by far the best-selling issue of the year so far. Here’s another one from Hosking’s camera lens that we think you’ll like, even if the whole Eleanor look has jumped the shark for many Mustang fans.

You don’t often hear about someone jumping into the world of modified cars at the very deepest of deep ends. We're talking 0 to 60 in an instant here. Two years ago, Wasyl (just Wasyl, like Cher or Elvis) decided he wanted to build a Mustang. Although his initial intention wasn’t to build the best of anything, that's certainly not what happened, as anyone who got to see this 1967 fastback up close at the 2013 MotorEx show in Australia can attest. Incredibly, this is his first custom car.

Built over a short two-year period at a site between Melbourne and Wasyl’s hometown of Sydney, this lucky Mustang has been the subject of more than 9,000 hours of intensive labor and incredible detail. From its flawlessly smooth fiberglass nose to its bespoke steel rear valance, nary a square inch was left untouched in the process of turning the donor car into what it is today.

“It was actually a very clean car to start with,” Wasyl says. “But we ended up tearing it right down to its core anyway. Every panel is new, including the rear quarters.”

Besides meaning that the car would have brand-new, baby smooth panels once finished, getting physical access to the innards of the car made it easier when it was decided early on to make those razor-sharp side vents functional, acting as ducting for the rear brakes. Up front, it also made it easier to create the gorgeous symmetry the engine bay displays today, with super-smooth panels surrounding the 427ci, nitrous-fed monster bolted to the custom chassis rails.

Housed within a symmetrical sheet-metal engine bay, the 427ci small block started life as a Ford Performance Racing Parts crate engine before ultimately being completely rebuilt. It now makes a truly evil 666hp with an additional power reserve coming from the 200hp direct-port NOS nitrous system. It goes just as good as it looks and is backed by a tough Tremec T-56 Magnum six-speed and braced sheet metal 9 inch.
Once Wasyl is comfortable with his none-more-evil 666hp, he can always hit the nitrous switch for an additional 200 shot.

Wasyl says the big-cube powerhouse started as a Ford Performance Racing Parts crate engine, purchased on advice he was given that suggested it would make things easier—and cheaper. However, by the time the car was complete the only thing left of the original crate engine was the block!

With the 427 now far more stout than before, thanks to parts from the Scat and ARP catalogs, it was decided to add some nitrous (you can’t have a Mustang inspired by Eleanor without laughing gas, can you?). Wasyl says he can’t wait to activate the nitrous switch on the dash and feel the push in the back from the 200hp direct-port system plumbed into the Edelbrock Super Victor manifold.

Beautifully finished, these side exits actually work, coupled with a remote cutout splitter, so the car can quiet down while passing the cops or EPA.

This combo is backed by a bulletproof drivetrain consisting of a Tremec T-56 Magnum six-speed box and braced sheet metal 9 inch held in place by a four-link rear suspension and reinforced mounting points all ’round. One thing this car will never have any trouble with is structural integrity. Both the chassis and floorpans boast additional stiffening, and the engine bay hides up to three layers of steel, particularly around the strut towers. While Wasyl and his builder, Goren Ilioski, were at it, the rear end was mini-tubbed to the rails to accommodate those massive 18x13-inch billet wheels and 335-wide Pirellis.

Inside, that same Shelby G.T. 500/Eleanor hybrid style continues, and Wasyl is keen to point out this was never meant to be a straight Eleanor clone. “Direction on this project changed a million times,” he says. “Small items of the build were constantly changing, but the core design stayed the same.”

Inside, you’ll find a mix of rich leather and suede with carbon-fiber inserts breaking things up a bit. It’s all new or custom with heated front seats adding further luxury. The build team worked hard to retain the classic feel despite the amount of work that went into it. Even the double-DIN Alpine head unit flips up out of sight when Wasyl wants to feel like it’s 1967.

The interior is a good example. Where things started as a classic restomod re-trim, only to bloom into a full-blown, if not subtle reinterpretation, of the original cars. From first glances, it would be easy to assume this was just an out-of-the-box job using repro parts. Look closer, and you'll realize a lot more is going on. Some parts have been modified and recovered up to three times to get the right look and feel. Those leather-clad seats are heated, and the carbon inserts are custom.

A comparatively brief two-year build may seem short for such an extensive project, but when you’ve got someone working on the car up to seven days a week and totaling some 9,000 man hours, it makes more sense. Yet, Wasyl still says that waiting was probably the hardest part of the build. “Managing a construction company interstate doesn’t leave much time to play with toys like this one,” he says. “But where there’s a passion, there’s a way. Having people working on it full time, managing it after a day’s work, giving my direction and vision, partly to de-stress from the construction industry and its challenges, was the norm for two years. People say it’s not the destination, but the journey. This was definitely not the bloody case here. I’m really happy it is finished.”

The trunk space is all formed in steel and covered with luscious suede. It plays host to two Alpine subs and power amps, the latter hiding under matching suede-covered panels. The two nitrous bottles carry Wasyl’s son’s names.
The billet hoops were custom made for optimum backspacing and feature custom spinner centers. Behind these lie huge slotted rotors that work with six-piston AP Racing calipers.

If that was the hardest part of the project, he knows immediately what the best part of the build was. “Showing it to my family for the first time at MotorEx 2013, for sure,” he says. “We finished it at midnight the night before, literally loading it onto the trailer at Andy’s and waking up in the morning in disbelief that it was actually finished. The highlight was definitely seeing my sons smile when they saw their names on the NOS bottles.”

Show life isn’t over for the 1967 just yet. Wasyl is planning a few more shows before letting the car settle into life as a family cruiser. A quick look underneath the car will show you that this was planned all along. Everything from the firewall back was coated in a generous layer of stone guard. What’s next then? Be prepared to see a 1950 Mercury sled in matte black with hot-rod pinstriping hitting car shows around the country within the next handful of years. 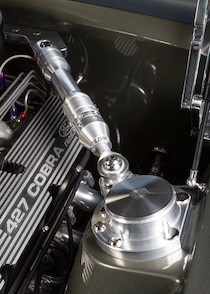