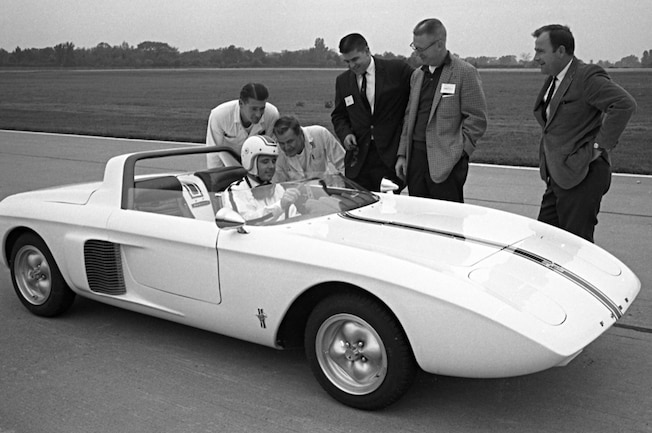 We have done several stories about the various stages of Mustang design and production, and even had two fairly exhaustive stories about “Mustang Job One” where Jim Smart chronicled Bob Fria’s effort to track down the first Mustang to roll off the production line. In the latest, in March of 2016, we brought you the story of the Mustang II prototype with modern color photography from Al Rogers. But before any of that came the very first Ford Mustang, now known as Mustang I.

When Ford took aim at the younger sports car buyer in the early 1960s, they did it with Mustang 1, a fully functional, hand-built prototype designed by Roy Lunn and crafted by Troutman-Barnes in Culver City, California. The engine was a rear-mounted 60-degree V-4 with four-speed transaxle taken from the FWD Taunus, a Ford of Europe product. The compact 1,498cc engine and transaxle were mounted behind the driver and produced a whopping (!) 89 hp at 6,600 rpm, and was good for 0-60 times of 11.1 seconds and quarter-mile ETs of 17.4 at 76 mph. Yeah, not blazing fast, but remember this was 1962.

The aluminum-bodied Mustang I made its debut in October 1962 at the United States Grand Prix at Watkins Glen. Dan Gurney, in a non-competitive demonstration drive, drove the 1,200lb two-seater at speeds in excess of 100mph, though some reports say 120 mph. Only the Mustang name and emblem from this prototype found their way to production vehicles—the subsequent Mustang II was much closer to the actual Mustang production car that we know and love today.

These photos, which were turned into the Petersen Publishing (now TEN) photo lab on August 24, 1962 (and appeared in the November 1962 issue of Motor Trend), show the Mustang 1 being built at Troutman-Barnes. That’s Tom Barnes at left and Dick Troutman on the right (with Wayne Guyer in the background) beating out final aluminum panels for the Mustang. They also made the tube frame for the prototype. Troutman-Barnes used the Ford Styling clay model and fiberglass body molds to create the hand-formed aluminum body, and they did it in a reported three months!

While Mustang I’s drivetrain configuration and type certainly never made it to production (Ford said it was too complicated and costly for mass production), a few design elements of the car made it into Mustang production, including the running horse emblem and the air intake vents on the rear portion of the doors, which became the cove/body lines that we know today.

The Mustang I Prototype now lives in the Henry Ford Museum, but now you know how it was hand-formed by a group of hot rodders in Southern California. 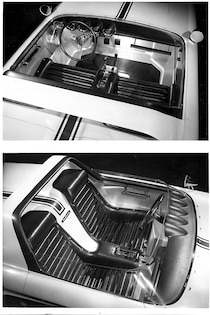