Family Challenge: A father and son 1,000 miles apart design an award-winning Mustang together 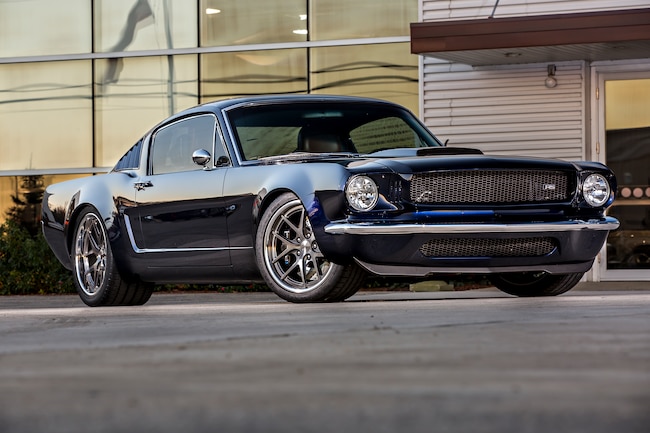 In the Mustang hobby, there are untold thousands of father-and-son Mustang build stories. Some include a father and his young son who isn’t even of driving age. Others include a father and son later in life looking to revisit the past. Most of these stories, however, feature a father and son under the same roof—or at the least living in the same town. When you’re 1,000 miles apart, even in today’s connected world, the project of building a Mustang becomes that much more difficult. Throw in a plan to build an award-winning high-end Mustang Pro-Tourer, not just a nice bolt-on restoration or restomod, and the task becomes even more daunting. So how can a son in California and a father in the Pacific Northwest accomplish this task?

Joel and his father come from a long line of Ford enthusiasts, several generations in fact, loyal to the Blue Oval. He’s one of us for sure. But with Joel living in California and working full-time building said Mustang project, while not impossible, would take a long time to finish. Even considering Joel’s well-equipped home shop, packed with tools and a lift, he believed he didn’t have the time to build the car he and his father envisioned.

The look is unmistakably early Mustang, but the more you stare at the front of this Mustang, the more you see the subtle Roadster Shop touches, including a custom grille insert (upper and lower), hand-fabricated steel lower valance, air splitter, and more.

First things first, they still had to find a Mustang. So, Joel’s retired father went in search of a clean, early fastback during 2012. He found the perfect car in the Pacific Northwest with the help of some car enthusiast friends. The running 1965 fastback was shipped down to Joel in California, where it was inspected, titled, and registered in the state of California to preserve the fact it was indeed an original 1965 Mustang, and not a replica or built from a reproduction shell.

With the car finally in Joel’s home shop, the build plan got firmer. They agreed the car needed a capable chassis with independent rear suspension (IRS), great brakes, and a custom interior. Starting with the chassis mods, Joel shipped the Mustang out to Phil and Jeremy Gerber at the Roadster Shop for a full chassis with its Fast Track IFS and IRS systems dampened by Penske double adjustable shocks. “We had always planned to bring the vehicle back to my home shop in California to do much of the work, subbing out items that I could not handle. Once we got further along, the difficulty of this project sank in. Only after visiting the shop several times to make some key decisions did we finally realize if we were to bring this car back to my garage, we would destroy much of the hard work done by the Roadster Shop, and not do the car proper justice,” Joel says.

The Roadster Shop was fully committed to the build and progress continued, though each step was met with new challenges. The Mustang is rather small when you compare it to a typical ’40s or ’50s street rod. Any time you move something around in the chassis, it greatly affects other areas. For example, dropping the body down over the frame gives a killer stance, but reduces its interior headroom and could cause the engine to sit above the natural hood line, requiring some ungodly scoop or custom hood. Add in custom 3-inch exhaust, and so forth, and the challenge can be quite the head-scratcher. To the Roadster Shop’s credit, they killed the stance while making sure everything fit perfectly, down to the seat height.

The second big challenge was to fit the IRS with a traditional-looking deep offset lip rear wheel to create the Pro Touring look Joel and his father wanted. It’s quite easy to do on a solid axle setup, but IRS is another thing. You can’t just go in and shorten control arms without interfering with suspension geometry, pickup points, and so on. The Roadster Shop metal crew deftly created the wheel flares that cover those deep-dish wheels, and it’s all steel. “In order to avoid an abrupt sharp rear flare angle, they had to remove several inches of the horizontal side scoop detail on back of the doors to make room for the gradual flares and give us wheel clearance. The guys that do the metal work in that shop are amazingly talented. We had the chance to meet them many times throughout, and they deserve a lot of credit,” Joel says.

The Forgeline wheels were custom finished in a smoke center and polished wheel lip. The combination not only works well with the paint, but ties in perfectly with the Baer brakes and their black hats and silver rotor finishes.

Once the modifications were complete and the grinders spun to a stop, the Roadster Shop was able to fit a set of 19x12 Forgeline VX3C wheels out back, wrapped in Michelin P335/30R19 rubber. The fronts are equally impressive at 18x9 with P265/35R18s. Behind those wheels are Baer Pro+ 14-inch brakes with Roadster Shop branded six-piston calipers. Additional metal work on the fastback includes matching flared front fenders, tucked front and rear bumpers, custom front and rear valances, custom front grille and surround, machined taillight bezels and fuel filler, shaved drip rails, and custom-machined exhaust tips attached to a full 3-inch stainless exhaust featuring Borla XR1 mufflers.

The Ford Performance Coyote Aluminator XS crate engine is completely stock except for the hand-fabricated intake manifold from Modular Mustangs, and the hand-fabricated induction tubing built in-house at the Roadster Shop. That’s not to say the engine is a poseur, though, as the Aluminator XS cranks out 500 naturally aspirated horsepower. You know this Pony has some giddy-up!

Under hood sits one of Ford Performance Racing Parts’ Coyote Aluminator XS crate engines topped with a Modular Mustangs fabricated intake manifold and Roadster Shop created inlet tubing. The Coyote 5.0L DOHC seems to be a no-brainer these days for the power output it makes and the level of support it gets from the aftermarket, which grows daily. It’s the perfect modern powerplant for those wishing to keep a Ford in their Ford. Going the next level with the Aluminator XS crate engine brings premium engine internals and performance parts to the table for serious horsepower. This is the same engine that was used in Ford Performance’s Cobra Jet turnkey drag race Mustang program! Backing the 5.0L is a Bowler Performance T-56 Magnum six-speed, which is coupled to the modular engine via a Centerforce DYAD clutch and pressure-plate kit. Doug Thorley Coyote-swap headers help the engine’s spent gasses find those Borla mufflers on the way out.

Once the suspension, driveline, and wheel and tire package had been fit-checked and all necessary modifications made to the body and chassis, the Roadster Shop blew the Mustang apart for final bodywork. The Roadster Shop’s in-house paint department buried the all-metal body mods in a deep coat of PPG Black Sapphire Pearl basecoat and clear coat. Several coats of clear, combined with color sanding and buffing of the paint surface makes for the mile-deep appearance of the final product. Before final assembly, the Roadster Shop shipped the Mustang back to Joel, where he worked with Ron Mangus Interiors in Rialto, California, to build the interior of his dreams. Joel was able to work directly with Ron on his interior design thoughts, including the use of recovered BMW M6 bucket seats, a Dakota Digital VHX gauge system built into a custom leather wrapped dash, a custom console in leather and aluminum, and more.

The Ron Mangus interior in black-and-tan leather creates an inviting cockpit. The hand-formed dash insert with Dakota Digital VHX instruments gives off a vintage Mustang flair, but makes a unique statement for the build.

With the interior wrapped (sorry, bad pun!) the Mustang headed back to the Roadster Shop in Illinois one last time for final assembly. The Mustang was painstakingly reassembled and readied for its debut at the 2015 Goodguys PPG Nationals in Columbus, Ohio—one of the premier Goodguys events during which the Street Machine of the Year is awarded. Joel and his father’s completed fastback garnered a Top 5 Award in the “Street Machine of the Year” category, something very few can claim. “The 20-plus finalists for ‘Street Machine of Year Award’ were, frankly, insane. Given the competition, I was blown away when the car was awarded a prestigious Top 5 Award. For this category of car build, there is no bigger competition in the country than the Columbus PPG Nationals. Hats off to everyone who helped make it a reality for me and my father,” Joel says. 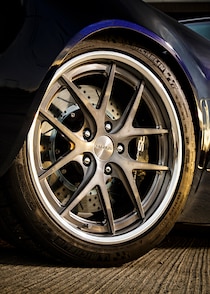 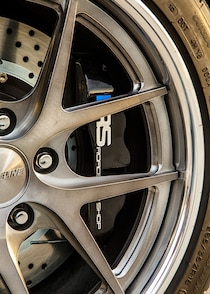 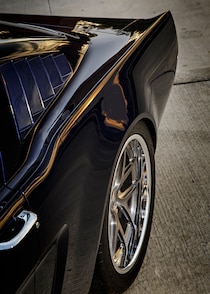 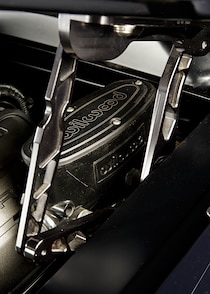 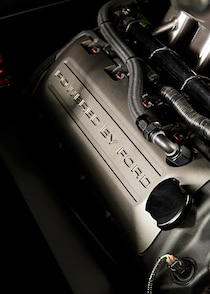 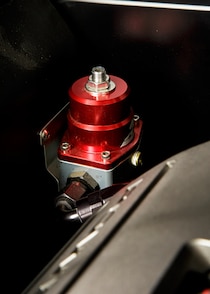 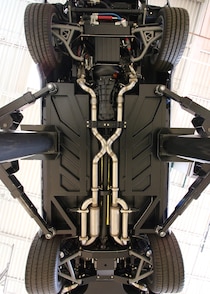 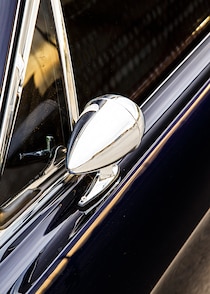 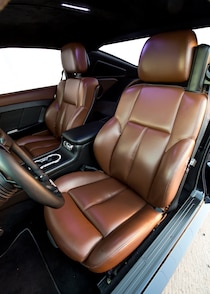