Push Came to Shove: “I like to run it to the limit and put the shifter on the edge of disaster.” 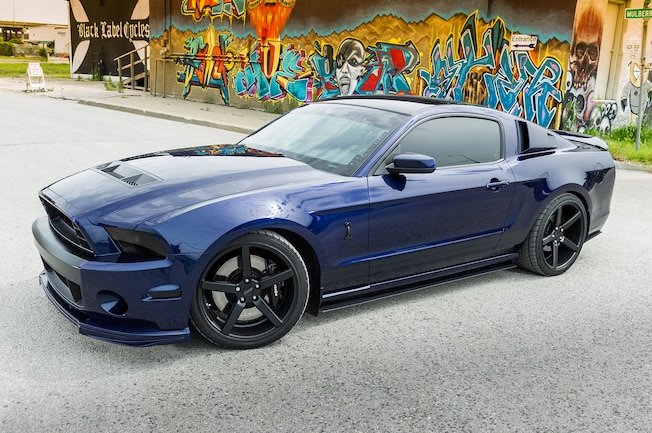 Sometimes you don’t know what you have until you come within a hair’s breadth of losing it. You see your future smashed and torn before your eyes and literally out of your hands. Chris Cline was live, front and center for this near-catastrophic journey.

In 2012, he bought a 2010 GT500, but when subsequent models (2013-2014) were issued, he was immediately fond of the new visual changes. He incorporated most of them, including the grille and front diffuser, rocker panels, and front and rear valance panels, into his Mustang. He primed and sanded, sanded again, then painted to “bring out so much more of the car’s body and the color.”

“August 14, 2014, is when things changed and push came to shove,” says Cline. “Heading home on the road I’m on every day, the car came around on me in a turn and got personal with a telephone pole. I was crushed beyond words. I spent the weekend trying to wrap my head around everything, thinking it’s totaled and gone and all my time [was] out the window.”

But Cline had a big ace in his pocket. As the manager of Hughes Auto Body in St. Louis, he had a thorough understanding of sheetmetal replacement and the tedious refinishing process. “My wife just looked me in the eye and declared, ‘You know you can fix it. You know you can make it better than it was.’ At that moment I saw the silver lining in a terrible situation. The build plan was on!”

Abetted by a couple of true friends, Cline chiseled off the bent stuff, replacing the left quarter, the package tray, the decklid, and other inner structural components at the Hughes shop.

Since the later 500s (2013-2014) had gotten some worthy mechanical upgrades, Cline didn’t hesitate to incorporate them. The axle was trashed in the hit, so he secured an 8.8-inch FRPP housing replete with 31-spline shafts, a Traction-Lok differential, and 3.73:1 gears. American Muscle cooled him out with some Koni adjustables (under Ford Performance 1 1/2-inch drop springs) as well as an aluminum prop shaft. Cline’s attention to the pointy end ended with another set of Ford Performance drop coils, but modifications stopped there.

Meanwhile, he called for some preventive maintenance, upgrading the vital link with a 2014 GT500 flywheel and a twin-disc clutch assembly. He strapped a Barton shifter on the TR6060. He jazzed the supercharged lump a little bit with a JLT 127mm mass air meter, a 2 1/2-inch-diameter Metco pulley (1/2 inch smaller than the factory piece) and slid in some custom-ground sticks that provide 0.533/0.556-inch lift and 229/228 degrees duration at 0.050. That was the extent of internal engine modification. Though the manifolds are stock, Cline hopped up the exhaust tract a little with an off-road X-pipe and 2014 GT500 mufflers. Craven Performance in St. Peters, Missouri, tuned the cake, producing 550 hp and 495 lb-ft of grunt and putting the GT in the 12.3’s at 116 in the NMRA/NMCA Real Street/True Street classes.

Cline says, “I’ve always had a love for cars. From as far back as I can remember, I had a Hot Wheel in my hand, so of course I made my passion my living. I’ve always had an artistic eye and I love details, so automotive painting was right up my alley. I studied collision repair at Ranken [Technical College in St Louis] after high school and I’ve been in it ever since. Body and paint are my trade, so modifications cost me time and a just little bit of money. During the rebuild, people kept telling me I was crazy and it was never going to drive the same. I laughed and said, ‘I know that. It’ll be even better!’”

Now it was time for Cline to enter his realm and the thing at which he excels. At Hughes Auto Body, he applied the Akzo Nobel Sikkens cocktail: one coat of black sealer, four coats of Kona Blue, and three coats of clear. He color-matched the emblems and the nameplates, the front diffuser and rockers, the rear bumper, grilles and ground effects from a 2014 GT500, and the Roush rocker splitters as well. Before the crash he had painted the Mustang’s white stripes black, but when he saw the rich blue field he’d created, he decided to leave the surface deep and unbounded.

As for kinship with his revitalized Mustang, Cline thinks that “luxury” is the only word that comes to his mind—luxury on the inside but in a ride that is still nothing less than a ground-pounding muscle car. As for the handling, he calls it an amusement park ride but the big difference is that he decides the speed as well as the direction.

So where is this all headed? “My son is a little over a year old now, and I plan on passing the passion down to him because, let’s face it, that’s the only way to keep this hobby alive and strong.” 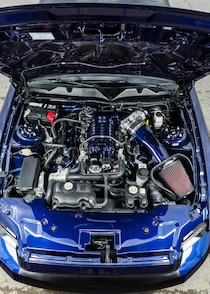 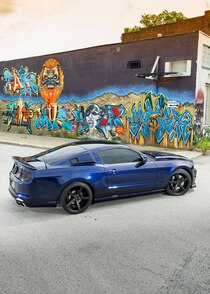 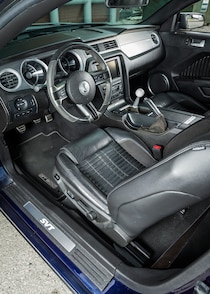