The Saga of the 1965 Mustang Wagon

Yes, a 1965 Mustang station wagon did exist (well, sort of) and people have been making replicas ever since 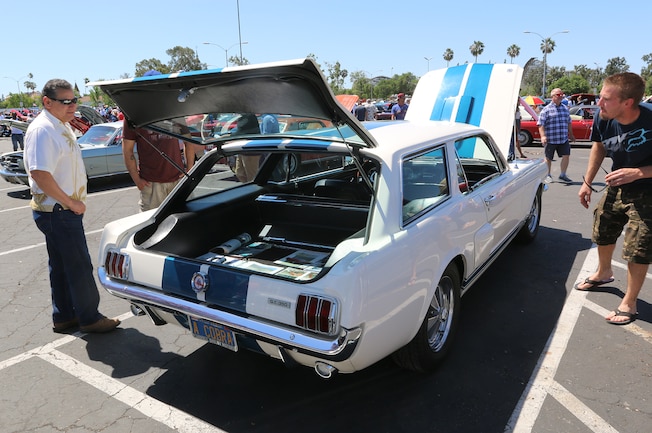 It’s an often-told story about the Mustang station wagon built in 1965, but spotting Gloria Hoskiko’s white-with-blue-stripes G.T. 350 wagon at the Fabulous Fords Forever show at Knotts Berry Farm reminded us of the story, so here’s a recap for those Mustang fans who haven’t heard it.

Barney Clark was an executive with J. Walter Thompson, Ford’s advertising agency, and along with designer Robert Cumberford and car enthusiast Jim Licata, dreamed up a two-door station wagon version of the brand new Mustang for 1965. Instead of pitching the idea to Ford to build, they sent a 1965 289-powered hardtop across the Atlantic to Turin, Italy, home of Construzione Automobili Intermeccanica. There the car got a wagon roof, a bottom-hinged tailgate, retractable rear window, relocated fuel filler, and folding rear seats. It came back to the United States after 11 months, but obviously Ford passed on the project, having already considered the idea with their own clay model during the early Mustang design stages. Clark and Cumberford might have been secretly banking on that, with plans to go into production and build Mustang wagons themselves if and when Ford turned it down. For reasons unknown today, they never did set up production and the “Intermeccanica Mustang wagon” became a one-off. It sadly has been lost to time and nobody knows where it is today.

Gloria Hoskiko’s Mustang wagon spotted at Fabulous Fords Forever in 2016. Unlike the Intermeccanica-built wagon, this one retains a stock-like trunk lid jamb and has a roof-hinged rear hatch.

While researching the wagon’s history, we ran across a 2009 story on Hemmings Daily that detailed reader John Murphy’s experience of seeing the car parked on a street in a suburban New Jersey neighborhood in 1966. He snapped a bunch of photos before being chased away by two guys—possibly Clark and Cumberford themselves. That green wagon appears to be the real deal, even with the correct license plate. As the Hemmings story said, “[The license plate was] New York 4N-5600, of the orange-on-blue style that New York used from 1966 to 1973… It appears the Intermeccanica-built Mustang station wagon that got so much exposure in the period buff books had the same plate. The 1965 build date (and late 1966 magazine coverage) fits with both the license plate and the date John Murphy spotted the wagon. The leaves are still on the trees, so he may have even spotted it before the magazines hit the racks, causing such consternation by the guy who told him to stop taking photos, who could have been either Barney Clark or Bob Cumberford, both of whom were instrumental in having the wagon built.”

This is the original Mustang station wagon (or “shooting brake,” if you’re into English cars) dreamed up by the Clark/Cumberford/Licata team and built by Intermeccanica in Italy.

There were some vague reports about the car being seen all the way in Amsterdam, but whatever happened to the Mustang wagon is unknown at this time. It is not a car that fades into the crowd, so we imagine it must have been destroyed, crushed, or otherwise sent to the automotive afterlife. Regardless of where the Intermeccanica-built car is, the idea of a Mustang station wagon has inspired countless people to custom-build their own, such as the white Hoshiko car that appears regularly at the Knotts Ford show. Mustang Monthly is working on a feature on that car as we write this, and hope to bring it to you soon.

During the past few years, we have outlined other Mustang wagons on Mustang-360.com, such as Joe Kamp’s custom build. Donald Farr also penned a story on the Hobo Top, an aftermarket fiberglass roof that converted a 1965-1966 Mustang convertible into a pseudo wagon in just a few minutes. Check that story out HERE, as well as the original Motor Trend story on the Hobo Top from May 1967.

This is the Motor Trend May 1967 story on the Hobo Top fiberglass wagon conversion kit.