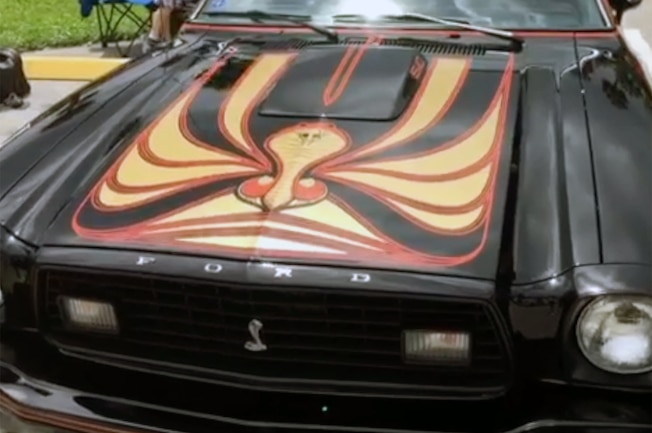 Yet another video car feature that Joe Greeves brought us from the St. Augustine, Florida Ancient City National Mustang Show is Billy Maddox of Fayetteville, Georgia and his 1978 Mustang II King Cobra. Being shown in the Conservator Class, Billy’s black snake is quite possible one of the only Mustang IIs that has ever undergone a rotisserie restoration. That was back in 2001 and 2002, after the car spent 15 years in a barn collecting dust and neglect.

The car is 100-percent stock and flawless. Billy tells us that the ’78 King Cobra was the first Ford product that used the metric (and now infamous) “5.0L” logo, denoting the 302 V-8 under the hood. The late-1970s were a true dead zone of performance thanks to maturing emissions standards and the OPEC oil embargo, so the poor 302 was rated an anemic 139hp from the factory. Billy’s car backs it up with an automatic transmission. His car is one of 4,971 King Cobras built (1978 only), and he’s been showing Mustang IIs with the Mustang Club of America since 1986 with his first car, a 1976 Mustang II Ghia.