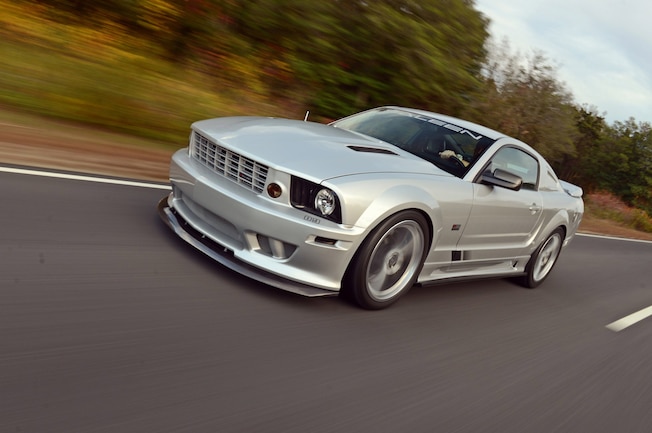 Ever since he was knee-high to a fender wall, TJ Wisniewski has been a car guy. The horsepower bug bit this lad pretty early, and by the time he got his Jersey license to create havoc on the streets, Wisniewski was already into some tasty, power-soaked, big-boy rides. But it wasn’t until he purchased his 1991 Mustang GT that got his enthusiasm rolling. The young man decided to start modifying his cars into the road-ripping rides he knew they could be.

In went all the tasty add-ons his bank account could handle. Cams, headers, nitrous, heads, blower—you name it, the GT got it. And it also got some visual upgrades as well, along with a major skin-tone change from red to silver. Needless to say, the warmed up Fox soon caught the attention of this here magazine, garnering full feature treatment in MM&FF in 1995. You could easily say it was a highly tricked out pony car for the ages.

Wisniewski fell in and out of love with the car. After nearly 20 years of owning it, the romance was over. Once he spotted the 2005-2009 Saleens with the new body style, he knew he had to make space for his next purchase. After just five days on the market, the gleaming little Fox found a new home.

With cash in hand and now further along in his chosen career, Wisniewski decided he wanted to build another ride. He figured he could start with a base model Saleen and go from there, working on it when cash flow allowed. The hunt was on for a suitable base Saleen to sculpt his vision out of.

Wisniewski’s dad was also in on the search. He ran across an eBay listing that featured a Saleen Extreme. TJ had heard of this particular model and figured it was out of his price range. However, the following day Wisniewski’s dad got the additional info they needed and they were on their way to see exactly what this ride was all about.

It turned out the car was everything they hoped it would be. But interestingly enough, the seller was not the original owner. The car had belonged to his brother-in-law, who had recently passed. They needed to sell off the car and settle his estate. Wisniewski made his best offer on the car, the one that his wallet said he could make, figuring it would be shot down. The man thought for a second, then said that would be good enough. After a handshake and a deposit, Wisniewski had secured the car.

Once he got the Saleen home, he devised his rebuild of the stock stunner. And that’s where the fun began. He started collecting parts to upgrade where he could, and he planned specialized treatment for the other parts that he was keeping. This car would go through a metamorphosis of sorts, not only on the outside but also to the drivetrain. 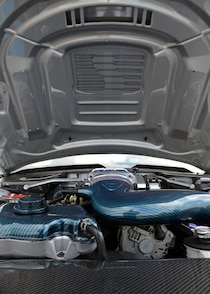 Under the hood the supercharged engine got a little beefing up. A 2.75 pulley replaced the stock piece, and a MoSaleen idler assembly was added. Up top a Ford Racing throttle-body and 60-lb/hr injectors were added, including a Saleen Extreme intake, a ported Saleen blower lid, Detroit rocker cams, and an upgraded intercooler tank with a heat exchanger. Kooks long tube headers get rid of the spent gases in a hurry and look good doing it. Last but not least, Wisniewski poured on the powdercoating and carbon fiber accents throughout the engine bay for a classy, modern look.

The exterior got a host of upgrades as well. Carbon fiber side skirts are out on the flanks, a Tru-fiber chin spoiler is up front, and the front grille was painted to match the rest of the skin. New Generation taillights adorn the rear of the chassis. Carbon fiber hood vents were added to the top side. Saleen Extreme wheels, 20x9 up front and 20x10 out back, garnish the corners with a little bling and are shod in Mickey Thompson rubber.

Inside, the already beautiful interior is embellished with a few tasty add-ons. Everything that could be wrapped was wrapped in carbon fiber hydrographics. This includes door lock surrounds, panels, handles, and gauge surrounds.

For the tune, Wisniewski headed to Big Daddy Performance in Lakewood, New Jersey, where it made 605 rwhp and 585 lb-ft of torque. He is more than happy with the numbers, and proud to have built this ride to his personal taste.

Wisniewski gives a lot of the credit to Steve at Checkers Powder Coating for his aesthetic touches and giving him direction when it came to the visuals. Also a shout-out to Dwayne and Mike at Big Daddy’s Performance, who have cared for Wisniewski’s Mustangs since day one. Unfortunately the shop is now closed, but the guys left a lasting impression on him.

Future plans? Well, Wisniewski will continue to pound the pavement in his custom Saleen, showing it off whenever possible. However, he sees another Saleen coming his way in the future. “Maybe a Saleen Fox-body or a New Edge convertible,” he says. No matter what, you know he is going to make it twice as bad as it was and take the next ride to the extreme as well.