“When Harry Met Sal-een”: Checking out a “Mager” Mustang score at the Jersey Shore 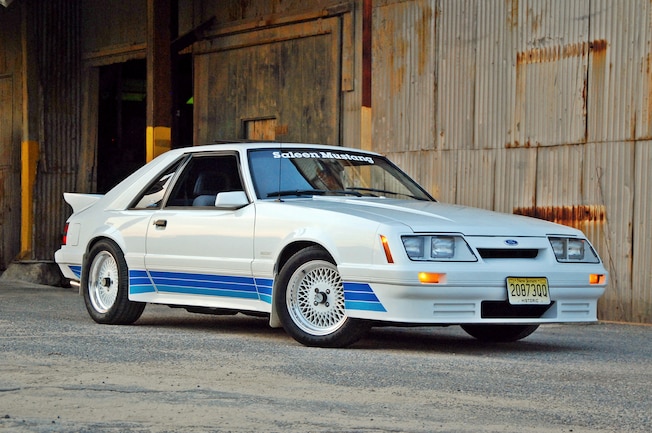 Harry “Hot Rod Harry” Mager (HotRodHarrys.com) has owned a lot of cars. Well actually he’s owned one HELL of a lot of cars; over 100 muscle cars to date and still counting, and since he’s just recently passed the half-century mark in age (along with the Ford Mustang), that in itself computes into one hell of a turnover rate. But he swears he’s not an automotive hoarder at all; maybe just a little “car-crazy” like many of us reading this story. Harry’s just enjoying life; collecting dream cars and putting them through the paces on the twisty roads in and around his lifelong home, just off the beachfront at the beautiful Jersey Shore.

And of those 100 plus cars, it’s no surprise that 25 of them have been Mustangs; examples which have represented every generation of Mustang produced by the Blue Oval Boys. You see, Harry’s been a lover of all things “Pony Car” since his pre-teen days, and has all the expired registration cards from his past Mustangs to prove it. Being relatively inexpensive to own and modify, and sporting “looks that hook”, the sporty Ford was a great choice for a young and upcoming car aficionado like Harry.

Harry’s dad, Harry Sr. raised his namesake on all things muscle car. Shortly after Harry Jr’s birth, Sr. bought a brand new 1965 Olds 442; the same exact one he still rips through the four-speed on today. And as he grew and acquired his own taste in muscle cars, young Harry came to realize that though he loved the Oldsmobile mystique and the joys of “Rocket Power”, there was more to street muscle than just the 442. He soon found himself addicted to the new breed of Mustangs out on the street, and the rest as they say, is history.

Coming of driving age in the early 1980s, it’s also no big revelation that Fox bodies have a special place in Harry’s heart. The return of the V-8, performance-prepped pony car had a lot to do with the love affair between Hot Rod Harry and the Fox-body Mustang. And it was Steve Saleen’s reanimated Mustangs of the 1980s that really got young Harry’s hot rod heart pumping. In 1985 the Saleen Mustang was the car that changed the way Harry looked at muscle cars.

“When I was in my early 20s Steve Saleen started making Mustangs. His first full production year was in 1985. My first love, but I didn’t end up getting one then. Seems like the local dealerships really didn’t even know what a Saleen was back in the day. So I purchased a new 1985 SVO Mustang that was on the dealer’s lot,” said Harry. The energetic SVO helped stoke a flame in the young car guru, and made him a fixture at his local Ford dealer. Next up, a new 1986 Mustang GT made it to the Mager garage. The power-packed Pony was just what the doctor ordered. It kept Harry on a path of seeking out and corralling top notch pony car muscle. “Purchasing old and new Mustangs through the years became my passion, but the one I really wanted eluded me for years,” Harry admits. Finally, last year, an opportunity to grab an original 1985 Saleen came about, and there was no stopping Harry from pouncing on the opportunity.

This Fox body has retained all its original sheet metal. The original factory paint still looks good, even up close!
All 1985 Saleen Mustangs were equipped with the Saleen Racecraft suspension, consisting of Bilstein shocks and struts, Racecraft specific rate springs, urethane sway bar bushings, and a K-member brace.

“Knowing I always wanted an 1985 Saleen Mustang, well, finally my chance came in 2013 when I saw a local ad touting an original 1985 for sale. I was there in minutes, and as soon as I saw her I knew she was going to be mine,” Harry fondly admits. It was almost too good to be true for this car connoisseur; the one pony that had eluded him all these years turned up so close to home. “Finally, my dream Saleen was in my garage. My 25th Mustang owned in my 50th year of life. The Mustang Gods took care of me.”

This particular example is number 098 out of a production run of 140 cars, as 1985 was the first full year of Saleen manufacture. It is authenticated as a true one of one car with its myriad of options. Factory white paint and blue striping, sunroof, A/C, along with power steering, power brakes, power windows and locks, and a tilt wheel make this one rare find. In 1989, her owner also decided to paint the black side trim white to match the rest of the body, making this one really stand out in the crowd. Harry likes the way the trim looks, so the custom paint work is staying for the time being. Harry has also tried to track down past owners. The last proprietor took possession of the car back in 1990 and sold it to Harry in 2013. He did no modifications to the car while in his possession for those 23 years. The owner amazingly enough also owned three other of these “four eyed” Saleens.

Red piping plays well with the all original gray toned interior. An Alpine receiver replaced the original Kenwood unit back in 1989, and has not changed since. The car still has its original Cal Customs alarm system.
This particular Saleen was sold new out of Bill Woods Ford in Kansas City, Missouri.

There were also other possible changes to the Mustang over the years such as the MOMO shifter and steering wheel installation. However, it’s known that these items came stock on the 1986 models, so it’s possible these examples were OEM to this build. The Saleen also sports a 1986 vintage air dam on the front. Our owner knows that Steve Saleen and his crew did use some off the shelf parts from time to time that were not the norm for certain years. One other interesting feature on this particular ride is that after part of the front fascia was repainted in 1989, the 098 build number call-out was reapplied under the high beam headlight, instead of the customary low beam headlight location. Harry’s not going to touch any of these modifications until additional historical information is found on Saleen 098, as he’s still tracking past owners and scouring the car for the subtlest of changes.

The Saleen Mustang story is well known in automotive circles. Steve Saleen is a well-oiled, dyed in the wool performance car freak, race car driver, designer and vehicle performance evaluator of the highest degree. In 1982 with the release of the Mustang GT, Saleen keyed in on the Fox body and pursued the idea of squeezing more performance out of the burly new Mustang. Knowing there wasn’t much he could do under the hood due to government restrictions, he focused his attention on the suspension and aerodynamics of the car, making changes that would turn this Pony into a true street and track performer. Thus in 1984, Saleen built three prototype cars; Mustangs that would lead Saleen into a full production run in 1985. This car is one of those fresh examples.

The Saleen’s engine is untouched and just how it came off of the Dearborn assembly line. It would be many years before Saleen would start making under hood modifications to its line of Mustangs.

Today Harry has no plans to part with his dream car. It’s a ride that harkens back to the good ol’ days of hot rodding; sporting a four-barrel Holley and touting a lack of any type of computer controlling the air/fuel mixture. And interestingly enough, this Saleen isn’t the first one he’s owned. A 2006, 2011, and 2012 have all been past inhabitants of Harry’s personal garage. This sweet Saleen does not live alone in the family garage, as it sits next to another pristine Fox body, a rare 1987 T-top GT, found locally by Harry himself.

So share your passion with Harry and check out his website and his 600,000 member-strong Facebook page. If you get a chance, send him a picture of your favorite ride—he’d love to hear from you! And of course a special shout out goes to Harry’s wife, Tara, for putting up with the HRH way of life!