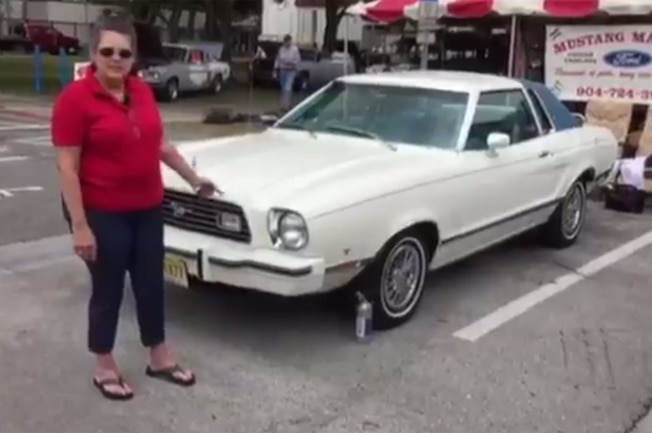 Found at the Ancient City National Mustang Show in St. Augustine, Florida was Andrea Lucas and her 1977 Mustang II Ghia. The car was completely stock but looked so fresh and clean that we had to get more information on it, and it turns out that this is one of the lowest-mile Mustang IIs we’ve ever seen.

The story is that the original owner bought the 302/auto car new in 1976 or 1977 and drove it just a little bit before putting it in storage, where it sat for years. Thankfully, the storage was climate-controlled so the car stayed in absolute pristine condition all those years, so when time came to sell it in the 2000s because the owner was moving, it was basically a brand new 1977 Mustang II.

That’s when Andrea Lucas bought the car and began showing it in place like the Ancient City show, where contributor and videographer Joe Greeves found it. Popping the Polar White hood reveals a 100-percent unaltered 302 with air conditioning, while the Aqua Blue interior looks as if nobody has even sat in it, which is understandable since the car only has 4,996 miles on the ticker. Amazing. Even if you’re not a fan of the Mustang II, you have to appreciate this throwback machine. The St. Augustine judges did, and gave it a Gold award in the Unrestored class.