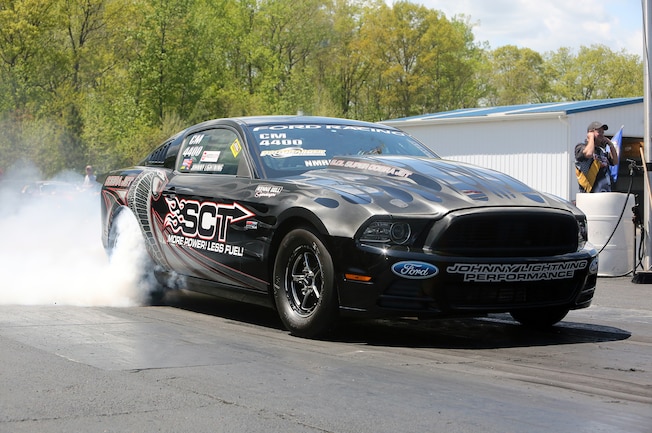 In 2008, the Ford Performance group changed the modern drag racing wars with the reintroduction of the Cobra Jet program. The first step into the factory race car program was a big one, and the models that followed have gotten even more impressive. By 2013, the Cobra Jet could roll out of the showroom and run in the 8-second zone with no modifications, no special tuning, nor any unspoken tricks.

The Cobra Jet was designed to partake in the longtime NHRA Stock Eliminator category; however, several Cobra Jet owners broke away from NHRA after feeling too restricted under the rules. Five of the legendary cars are fixtures on the NMRA heads-up scene, and one of the more prominent runners is Johnny "Lightning" Wiker of Johnny Lightning Performance. His Kenne Bell–pumped ride has gone a best of 7.96 at 175 mph.

"When Mike Harries and Charlie Cooper told us that the Cobra Jets [supercharged 5.0 combo] were available from Ford, we all went out and got one," says Wiker. He did, at first, try his hand at a select few NHRA races and worked with several Cobra Jet owners, but the prospect of keeping his foot to the floor was too strong. Today, Wiker's goal is to chase the Coyote Modified championship in outlaw CJ trim, and that puts an ordinary NHRA-legal Stocker far in the rearview mirror. Wiker went off to NMRA competition, a racing arena where he has been a fixture in the Truck & Lightning scene for nearly 15 years.

Wiker was quick to add, "We've always been NMRA racers, and you know me—I cannot leave well enough alone. I am a Kenne Bell guy, too, so I had to go with the bigger blower, and we went in the NMRA direction with the Cobra Jet."

The attack on the NMRA scene first began in the Renegade ranks, and a Kenne Bell 4.0L supercharger sat on top of the JLP Racing 5.0L engine package. After some consideration, Wiker made the move to Coyote Modified in the 2014/2015 winter. Per class rules, he backed off the supercharger size to a 3.6L. He instantly found a home in the class that's designed for Coyote-powered Mustangs.

As the game plan came together with the supercharger and new chassis configuration, Wiker set out to build a truly bulletproof 5.0L Coyote short-block. At the time, the Coyote 5.0L was still evolving. Many racers like him were forging fresh paths with new product designs to solve various issues as the Coyote platform was pushed harder and harder. For Wiker, the cylinder head program was great, but engine block problems were common. The solution was in a brand-new product that Ford Performance was designing. Wiker was one of a select group of racers chosen to test it.

After Ford engineers looked at certain troublesome areas of the factory blocks, they addressed the issues and produced the M-6010-M50R block. "The engine has been flawless ever since," says a proud Wiker.

Other parts and pieces inside the engine that differ than the Cobra Jet program include Manley rods and pistons (JLP-specs), larger DeatschWerks fuel injectors, a custom ATI Performance TH400 transmission and Neil Chance torque converter, and a Kenne Bell Boost-A-Pump on the Ford-supplied Aeromotive fuel system. A Kenne Bell 3.6L supercharger sits on top of the engine and features a giant rear facing throttle-body for minimal inlet restrictions.

The 2015 season was a good one for Wiker—he finished as the champion in Truck & Lightning with his Gen 2 Lightning truck and was the runner-up in Coyote Modified with his Cobra Jet race car. The Pennsylvania resident narrowly missed the Coyote Modified championship because a broken fuel injector clip on the harness had caused one final round loss earlier in the season, and a broken throttle-body linkage ended his fun as a runner-up finisher over another weekend. Wiker, however, did secure two class victories on top of the two runner-up finishes, and he traded the record and top qualifying position back and forth with the eventual class champion.

With the NMRA season ending in early October, Wiker decided to keep the Cobra Jet on track and go after the 7-second timeslip. The Cobra Jet had been a consistent 8-teens-to-8.20s in NMRA competition, so he knew a few changes were needed to achieve that goal. The NMRA-spec race fuel was dumped, and the oxygenated racing gas Q16, from VP Racing Fuels, replaced it. Wiker then bolted on a Snow Performance water injection system. "We knocked off the air temperatures by 80 degrees on the dyno. It was a little less drop on the track but the Snow Performance kit worked awesome," says Wiker.

The Mid-Atlantic's weather conditions are exceptional late in the race season, and Wiker took advantage of it at his home track, Cecil County Dragway. With a fresh set of Mickey Thompson ET Street Radial Pro 275 tires out back, the Cobra Jet dug into the pavement with a 1.18 60-foot time, which is gettin' it done for a 3,420-pound race car! The front end came up, so he aborted. The next run Wiker made a few changes and was propelled to a career best of 8.006 at 174 mph. That is where his best time stood through the winter hibernation.

No matter how hard he tried to go quicker and grab that 7-second run, he came up short. Week after week on track didn't yield a quicker time. Even so, Wiker was happy to still be racing because, he says, "A week before the NMRA World Finals I went into the hospital with a blocked artery." Emergency surgery had him fixed up and back on track in less than one week, but had it not been for his wife, Sue, he might not have been around to chase the 7-second barrier at all.

When the season broke open for 2016, Wiker had arrived in Florida with more power and a lighter base weight for Coyote Modified. The Spring Break Shootout at Bradenton Motorsports Park has always been a good race for him and team JLP after numerous wins, including a double victory in 2015. The Pennsylvania racer qualified in the third position as he fought to keep the front end on the ground. A few clicks on the Santhuff front struts and rear shocks proved to be the right call for round one of eliminations—Wiker advanced as he screamed to a career best of 7.96 at 175 mph. He went on to take the win, making the trip to Florida bittersweet.

As with any heads-up car of this caliber, there is a long list of supporters, with wife Sue right at the top. She keeps the family business, Johnny Lightning Performance/JLP Racing, running smoothly, even when they are out of town racing. On the doors of the car Wiker proudly displays the SCT logo. The tuning company sponsors both the Cobra Jet and Wiker's race truck, which carries a Cobra Jet theme and is nicknamed the Lightning Jet. And there is Kenne Bell, which is sort of the unofficial supercharger of the shop as all the fast cars and trucks get one bolted on.

With just one event down and the 7-second zone already crushed, Wiker is taking aim at two championships in NMRA competition.