Is This the World’s Most Accurate 1968 Mustang Bullitt Clone? 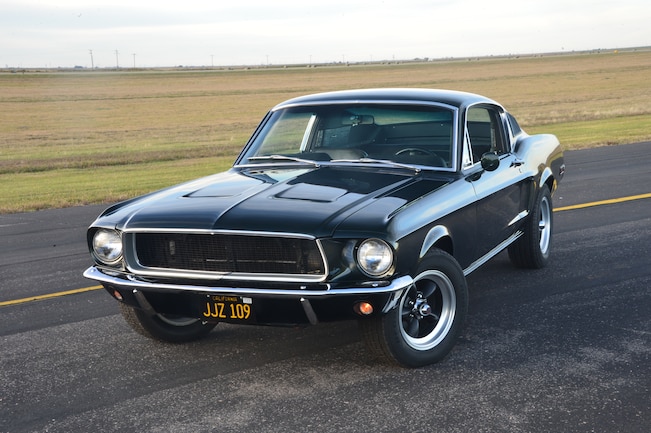 Two decades ago, Jason White was a teenager with no car affiliation, saying, “I was just getting into cars. I had no idea what I wanted.” Then, he watched the cult classic Bullitt, starring Steve McQueen, and the hero’s 1968 fastback made a big impression.

“I thought that’s my car, that’s my personality.”

Bullitt the movie has achieved cult status, as has the car, so Jason White figured he would build his own Bullitt.

Later, White got into the body shop business and then automobile restoration (located in Hereford, Texas, he built our project 1968 Mustang convertible). No surprise the 1968 Mustang remains his favorite and White has restored several for his high performance Mustang stable. But he always wanted a Bullitt for himself. He bought and still owns a 2008 Bullitt, 100 percent stock from Ford, but it wasn’t good enough, saying, “It’s not the same as having a 1968.”

So, in the spring of 2015 Jason began building a Bullitt clone. 1968 fastbacks being expensive these days, he modified a 1967 six-cylinder hardtop with a Dynacorn kit to create a fastback. He describes his conversion as “factory… everything bolts right up.” With a clean slate, White was ready to start his masterpiece, but first he had to figure out the exact build of a Bullitt. The movie commissioned two 1968 Mustang fastbacks to film Bullitt. One of the two was pretty much junk after filming and is lost or crushed. The second Bullitt is supposedly hidden away from public view.

Is this the best Bullitt clone ever?

So White decided to “slo-mo” the movie to scope out details. He found a source online to buy blown up photos of Bullitt movie stills. He read interviews of the man that built the original Bullitt Mustang for McQueen to drive—and jump—around the streets of San Francisco. Armed with this info, White built his Bullitt in a rigorous manner. His goal was a Bullitt clone as close to the original as he could.

“I could have gone with an aluminum intake, but that’s not what they used in the movie.” The movie Mustang had a cast iron intake and a 750-cfm Holley carburetor, so that’s what Jason used. “The builder also said he milled the heads to get more compression. He installed Hooker headers, so I installed a set of those. Everything that he said he did, that’s what I did to this car.”

Per the movie car, White’s Bullitt has 3.25:1 gears in an open differential. White replicates a scene from Bullitt when McQueen burned rubber in reverse while chasing the bad guys’ Charger.
Another slight compromise: the Bullitt-correct steering wheel is a Shelby leather-wrapped 3-spoke. These wheels are hard to find. White cut out a Shelby wheel center to fit inside a Grant wheel to get the Bullitt look. (If anybody has a correct wheel, email jerryheasley@gmail.com.)
Taillight bezels and panel are painted flat black.

White’s attention to detail is akin to a restorer. The original builder used a telescoping power antenna from a Porsche 911 of the day, so that’s what Jason installed on his fastback. Some details are not exact, such as the driver’s side mirror. White could not find an original Yankee mirror, but a 1966 Mustang side mirror, painted body color, looks almost identical.

White finished his dream Mustang in about 10 months. His first show was in Amarillo, Texas at “Crime Stoppers,” appropriate, he feels, for a “cop car.” McQueen sure didn’t look like a cop in the movie, and neither did the car, but, that’s the heritage. White plans to drive the car more than show it. He even beefed up the suspension, same as the movie car, to be able to stand the jumps done in the movie.

The Bullitt grille was a 1967 unit in order to eliminate extra mounting tabs of the 1968 model and the double corral. Of course, Bullitt did not come with the running horse.
The 390 was a Mustang S-code. A slightly higher compression ratio, headers, and a larger carburetor bumped horsepower up about 20.
The wheels are American Racing Torq Thrust Ds. White repainted the light gray centers to look more like the real original magnesium wheels on Bullitt.
Hooker headers, painted white, are also “Bullitt stock” and circa 1968.
Dark Highland Green is the Bullitt color.