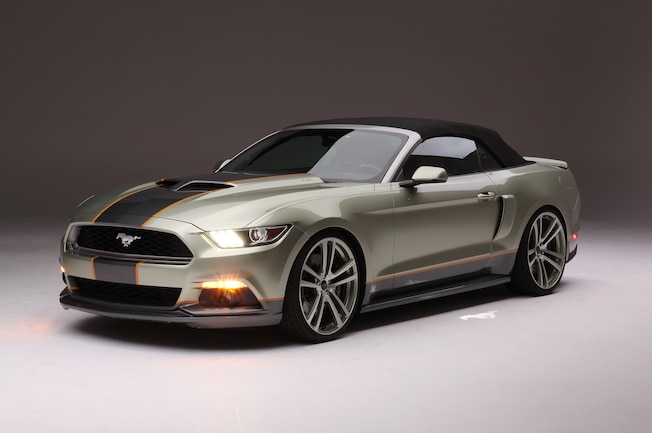 You'd be hard-pressed to find someone who is into cars but doesn't know the name Chip Foose. That's because over the last 30 years, Foose has not only built a great reputation by designing and delivering some of the most memorable vehicles hot rodding has ever seen but has also become an unofficial ambassador of the hobby by staring in Overhaulin', a classy and competent cable television show that was a singular departure from the usual "reality" car building programming offered by other shows.

Foose grew up with and eventually worked alongside his famous car customizing father, Sam. After high school he attended the Automotive Design department at Pasadena's Art Center, and turned down some high-profile job offers after graduation to go work for Boyd Coddington, a SoCal based rodder who, with Foose's help, ushered in the billet aluminum wheel craze as well as the smoothie look prevalent in the hobby in the 1990s.

After the turn of the century Foose struck out on his own and opened Foose Design, where he not only developed a line of self-named road wheels but also many more designs for other companies under other names. He continued with either designing or building award-winning vehicles for his customers, which included the coveted America's Most Beautiful Roadster award (eight times!) and the Don Ridler Memorial Award (four times)—two of the hobby's highest honors.

By 2004 Foose began work on the Overhaulin' television show, where he helped realize the dreams of more than 125 hot rodders from all across the country by rebuilding their rides into show-worthy drivers. With that show ending in 2015, Foose has not slowed down the pace of building customer's cars or stretching the boundaries of the hot rodding hobby.

So, you might ask, with all this talent readily available at his fingertips and the ability to own, build, or drive anything he wanted, what is parked in his driveway? Maybe not so surprisingly, it is an iconic automotive shape celebrating its 50th anniversary: a Mustang convertible.

But, as you might imagine, it is anything but stock. Working with Ford and AmericanMuscle's Modern Muscle Design (MMD) to develop a line of body parts for the new 2015 Mustangs (both coupes and convertibles), Foose was able to get access to the very first convertible off Ford's assembly line. In fact, in order to have the car ready to debut at the annual SEMA Show in Las Vegas in 2014, Ford stopped production of the Mustang coupes to hand-walk the convertible parts over and assemble the car, with regular coupe production filling in behind it.

Once Foose had the car, which showed up at his shop painted black with a red and black interior, he began redesigning certain aspects that would enhance some areas without subverting Ford's concept of one of its oldest line of vehicles. Stance, always at the forefront of any Foose-designed car, was addressed with a set of Eibach springs that are 1 inch lower than stock. The 22-inch Foose Monoblock Boost wheels (9- and 9.5-inch) are wrapped in 265/30-22 and 285/30-22 Pirelli rubber. Behind each wheel are Baer 15-inch brake rotors gripped by Baer six-piston calipers.

Providing the power is a 2.3L, four-cylinder EcoBoost motor, but with a larger turbo that can produce some 400-plus horsepower. The exhaust has been upgraded as well with a one-off stainless system (including mufflers) from MagnaFlow. The car served as a prototype for future convertible exhaust systems, as they're different from the coupe's layout. The six-speed manual transmission is factory stock.

But of course the appearance of a car is what Foose does best. He performed certain changes to Ford's all-new body design—some obvious and some not so obvious. Starting at the front and working rearward, Foose addressed the lower fascia and chin by filling in the gap between the bumper section, evenly extending the chin all the way across, then reshaped the turn lens fitment. The grille was also pushed back a few inches, and a new grille surround was made that adds depth.

The rocker panels are more pronounced on the Foose ride than the stock rockers. New side scoops/vents are placed in the quarters to emulate the look of the 1960s GTs. Foose liked the raised section of the factory hood but felt it needed more of a muscle car appearance, so a top section was added that features twin nostrils up front for added air induction and a more aggressive look.

Out back, 50th anniversary taillights with chrome trim went in. A small spoiler was added to the decklid. The lip of the rear diffuser was reshaped around the car's corners and painted in satin silver—the same color as on the windshield surround and some of the interior details. Once all of the prototype pieces were finished, Foose completely reworked all the car's surfaces and gaps to show car quality and then painted it with a custom mix of Glasurit 90 Line paint.

Some might think the car has a simple green-over-gray color composition, but there is actually a lot more going on. Using paneled graphics, Foose can draw your eye to certain aspects of the car's shape while also deflecting the view from other areas. The smoke-gray color on the lower third of the vehicle draws your eye downward, making the car look lower than it is.

The orange accent stripes on either side of the hood graphic draw your eye down the center of the car and subtly denote speed. The orange stripe above the rockers actually widens slightly as it goes rearward, highlighting a wedge shape Foose wanted to promote. That trick is used on the hood stripes, too. Dennis Rickleffs, Foose's preferred pinstriper, came by to lay down a twin line of green stripes, but even those have a story.

Because of the shape of the car and the way the green color is reflected at any given angle, your eye will naturally see some sections darker (the doors and rockers) and some lighter (the hood and decklid). Foose had Rickleffs add two lines of green pinstripe, one contrasting the darker shade and the other contrasting the car's lighter shade, with one laid out closely above the other. That way, when you look down the side of the car, you tend to see only the contrasting color appear as a highlight and you won't notice the matching shade. Once you move to a different angle, the car's highlights change, but it still only looks like a single color of pinstripe.

With the color on, the convertible was delivered to Lil John, the upholsterer Foose has worked with for the past six years. Lil John recovered the front bucket and rear bench seating, along with the door panels, with two-tone gray and green Katzkin leather (with orange stitching) that follows a design by Foose (the seat design with the factory upholstery doesn't match the door panels, but it does with the Foose design). The rest of the interior is stock, save for the Chip Foose signature on the dash above the glovebox.

Once the car was finished and detailed it was shipped off to Vegas to be shown in the Ford Motor Company booth at the SEMA Show, which is among the largest automotive aftermarket conventions in the world. Ford hands out a few trophies for some of the more significant cars displayed, and Foose's Mustang received Best of Show on Corporate Display Stand (one of only three Best of Show awards distributed).

Since the SEMA show, many of the parts found on Foose's Mustang have been digitally scanned by MMD and are available on the AmericanMuscle website, so anyone can have a 2015 Mustang that looks like Foose's—though it might be tough to improve on his personal ride. Foose is always thinking of new projects (we hear an original Duesenberg chassis with a vintage-look body he designed might be his next ride), but we're pretty sure no matter what it is, we are going to want to check it out. 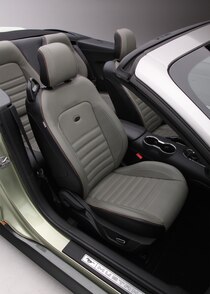 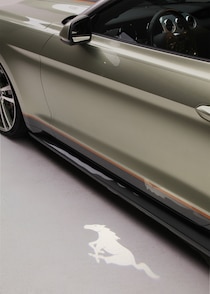 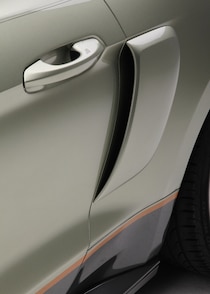